Is This 'Shaun of the Dead' Meme Mocking Real Ohio Protesters?

A viral photograph from a protest against stay-at-home orders during the COVID-19 pandemic was likened to the zombie movie "Shaun of the Dead." 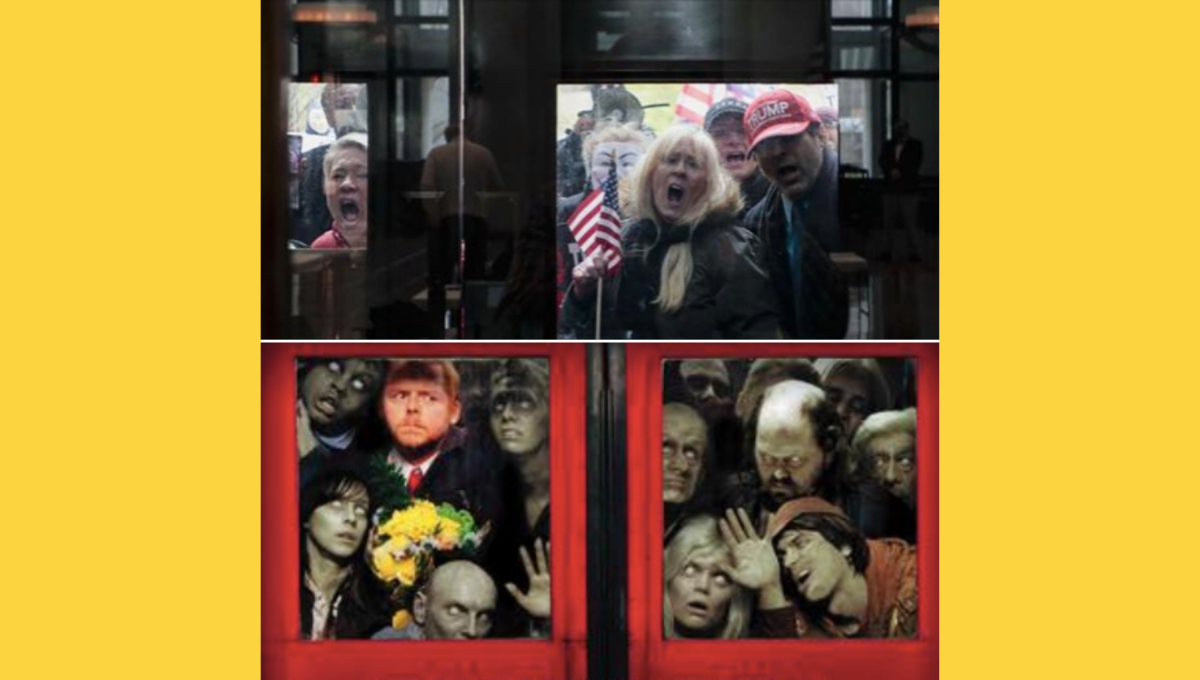 Claim:
A photograph shows a group of people outside of the Ohio Statehouse protesting shelter-in-place laws put in place during the COVID-19 pandemic.
Rating:

In April 2020, various cities in the United States saw protests against shelter-in-place orders that were enacted to combat the spread of the COVID-19 coronavirus disease. Several photographs and videos showed these protests, but one image in particular went viral after it was likened to a scene from the zombie comedy "Shaun of the Dead." The top half of the image is a real photograph taken on April 13 by Joshua A. Bickel of The Columbus Dispatch and shows protesters outside of the Ohio Statehouse demonstrating against the state's self-quarantine rules.

It was originally published in an article entitled "GOP lawmakers, protesters call on DeWine to begin re-opening Ohio."

Some Republicans in the Ohio legislature are publicly calling on Gov. Mike DeWine to consider removing coronavirus-related restrictions beginning next month, while on Monday, around 100 protesters gathered outside the Statehouse during Dewine’s daily COVID-19 press briefing.

A growing chorus of Ohio’s Republican lawmakers want Gov. Mike DeWine to set a date for the first phases of re-opening businesses, schools and public places.

“We need to get the economy open, even if that means social distancing of some sort for months to come,” Sen. Andrew Brenner, R-Delaware, wrote in a Facebook post. “We can’t stay like this much longer, and the hundreds of thousands of Ohioans who’ve lost their jobs or the thousands of small business owners can’t keep doing this either, or their lives will be irreparably destroyed.”

On April 15, shortly after this image went viral, The Columbus Dispatch published a follow-up article providing the story behind the photo. This photograph was presented in that article with the following caption:

Protesters stand outside the Statehouse Atrium where reporters listen during the State of Ohio's Coronavirus response update on Monday, April 13, 2020 at the Ohio Statehouse in Columbus, Ohio. About 100 protesters assembled outside the building during Gov. Mike DeWine's weekday update on the state's response to the COVID-19 pandemic, upset that the state remains under a Stay-At-Home order and that non-essential businesses remain closed.

While Bickel's photograph was taken on April 13 in Ohio, it truly went viral later a few days later when a similar (but larger) protest dubbed "Operation Gridlock" took place in Michigan and made national headlines. That protest featured hundreds of Michiganders outside of the state's Capitol demanding an end to Gov. Gretchen Whitmer's stay-at-home orders.

Whitmer said that the protest in Michigan, which featured American flags, Trump flags, Confederate flags, and a number of heavily armed protesters, was just as much about partisan politics as it was about public health.

It really wasn't about the stay-at-home order at all. [...] It was essentially a political rally, a political statement that flies in the face of all of the science, all the best practices. [...] It looks like a lot of people and it felt like a lot of people but in the bigger scheme of things, Michigan is a state of 10 million people, the vast majority of whom are doing the right thing. Our hospitals have stepped up, our nurses, our doctors, the average citizen whose staying home or is contributing in some way to help people on the front line. That's the story of what's really going on here.

This group, a small group of people that came together without masks on, who were passing out candy with bare hands to children, who were congregating together, who were brandishing their weapons, who were having posters of being anti-choice; this was a political rally, it was a political rally that is going to endanger people's lives, because this is precisely how Covid-19 spreads.

While there has been genuine criticism about various stay-at-home orders, there has also been a good deal of misinformation shared about these restrictions. For instance, many people falsely accused Whitmer of "banning the sale" of American flags.