Unsolicited emails that appeared as a fake Fox News article led to a Keto Burn scam that had no affiliation with the "Shark Tank" TV show. 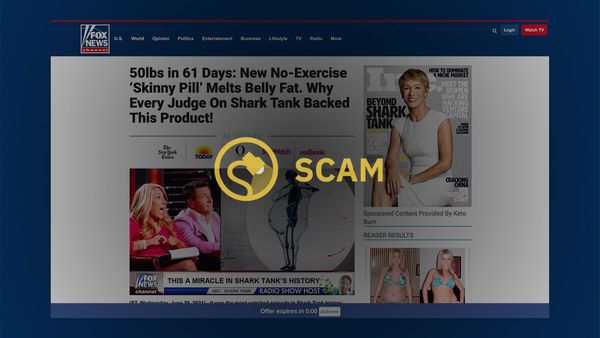 For years, readers have received unsolicited email messages about a weight loss product that purportedly appeared on the "Shark Tank" television show. Clicking the link in the email led to a product called Keto Burn. We previously reported about a similar scam involving a similarly-named product: Keto Fit.

The emails for Keto Burn were designed to look like a Fox News article, even though they appeared to have no affiliation with Fox News. This article did not come from Fox News. It was fake.

It appears that a person or company used the Fox News logo without the company's permission.

After clicking the link in the email, users were led through a number of questionable redirects, meaning that they were bounced from website to website before landing on a final page. On that final page was another misleading story on a website called Live Intelligence Outreach. The headline read: "50lbs in 61 Days: New No-Exercise ‘Skinny Pill’ Melts Belly Fat. Why Every Judge On Shark Tank Backed This Product!"

The article showed a screenshot that appeared to be from a Fox News Channel television show. This fake screenshot appeared on a Keto Burn pitch website.

However, this was also fake. This did not air on the Fox News Channel. One dead giveaway is that the font in the lower-third area looks amateurish.

Clicking the link in the email led to a page that claimed: "It was the most-watched episode in 'Shark Tank' history when sisters Anna and Samantha Martin won over the 'Shark Tank' panel."

However, we found no such episode. People named Anna and Samantha Martin never appeared on the show.

The scam article also claimed: "The pair are the first contestants in the show’s long duration to ever receive a standing ovation and offers of investment from all panel members. The sisters said they celebrated the success with champagne and cake when the episode wrapped."

The story then displayed a picture of "Shark Tank" personalities with a cake, purportedly celebrating after an episode about a weight loss product. This photograph has nothing to do with weight loss products.

These publisher logos were misleading.

However, we searched the content of all five publishers and did not find any coverage of a product called Keto Burn. This was highly misleading.

In sum, a scam involving unsolicited emails, "Shark Tank," and a Keto Burn weight loss product led to an article that misled readers. We recommend readers delete such emails and avoid following links to such websites.