Was Sharia Law Established in Texas?

The existence of voluntary religious tribunals for conflict resolution is not the equivalent of imposing "Sharia law." 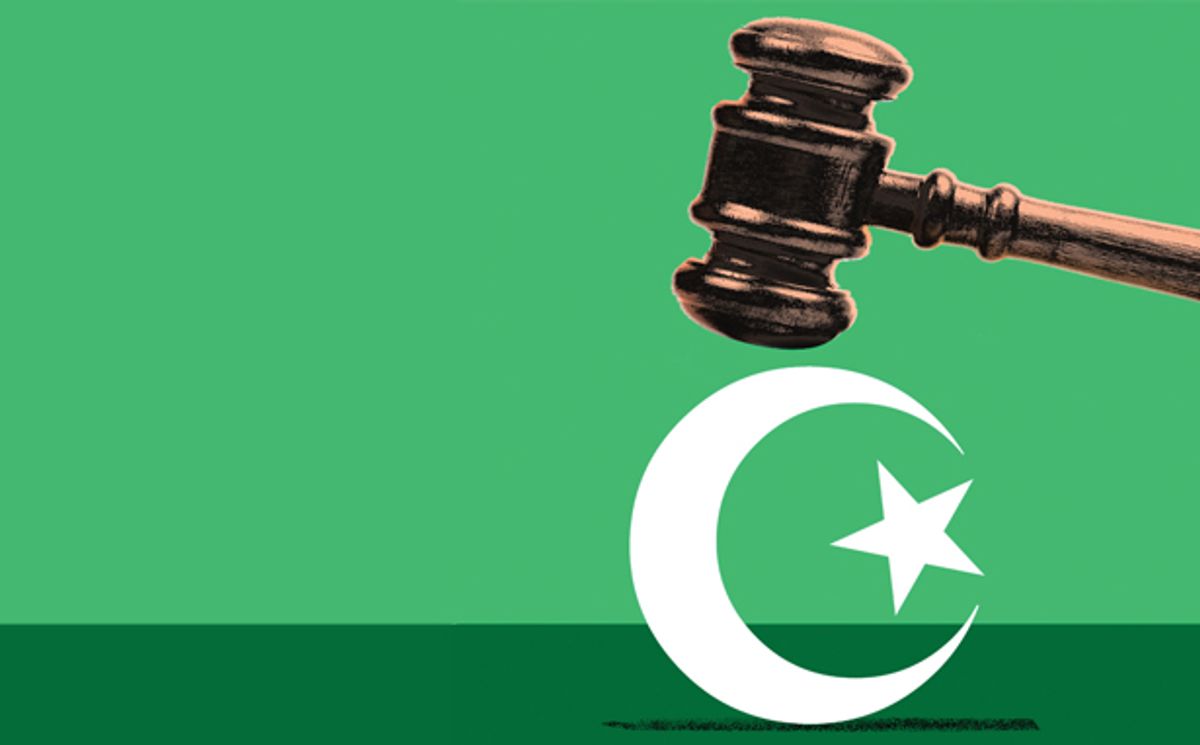 Claim:
Sharia law has been established in a jurisdiction in Texas.
Rating:

On 27 January 2015, the website Breitbart published an article titled "ISLAMIC TRIBUNAL CONFIRMED IN TEXAS; ATTORNEY CLAIMS 'IT'S VOLUNTARY.'" While the article's details were novel, the premise was not: A number of locations in the U.S. (Dearborn, Michigan, is frequently mentioned) have been rumored to be partially or fully subject to "Sharia law" enforcement. The claim also echoed the discredited belief in so-called "no-go zones" exist in the United States and Europe, where law enforcement agencies refuse to tread and immigrants who favor Islamic law have created a de facto parallel system of justice.

The Breitbart article began by stating that "[the existence of] an Islamic Tribunal using Sharia law in Texas" had been "confirmed" by the site, that the tribunal was "operating as a non-profit organization in Dallas," and that it was "voluntary" in nature. It went on to discuss potential conflicts between the tribunal and state law in Texas, making particular note of possible social sanctions for not abiding by the decisions rendered:

Breitbart Texas asked what happens when there is a conflict between Sharia law and Texas law. [Dr. Taher] El-badawi said most of the time, the laws are in agreement. When pushed further he admitted that, "we follow Sharia law." However, he explained, "If the parties are not satisfied with the tribunal's decision, they do not have to accept it and they can take the matter to Texas civil courts." He did not say what the social ramifications of rejecting the "judge's" decision would be.

El-badawi restated several times that participation in the tribunal is voluntary. However, he would not discuss what happens to someone who did not follow their rulings.

The claim was recirculated by readers and other blogs, many of whom inferred (in part due to the insinuation the rulings were somehow binding in a way the tribunal would not disclose) the service in question superseded local, state, or federal law. One such version voiced concern over the purpose of such an organization:

An Islamic Tribunal that uses Sharia as the basis for law, not the US Constitution, the Bible nor the Texas State Constitution has been set up as a non-profit organization in Dallas. The tribunal claims that, for the most part, Sharia is in agreement with the laws of Texas. Price was told by El-badawi that if the tribunal ruled in a way in which the parties disagreed, then they could go to the Texas courts, which makes you wonder why one would have this tribunal in the first place.

The source article linked to the tribunal's web site, which explained the center's intent and scope:

Conflicting problems within American Muslim society may range from personal and family matters such as marriage and divorce, as well as disputes among community members and those in positions of leadership. The courts of the United States of America are costly and consist of ineffective lawyers. Discontent with the legal system leads many Muslims in America to postpone justice in this world and opt for an audience on the Day of Judgment.

It is with this issue that Muslims here in America are obligated to find a way to solve conflicts and disputes according to the principles of Islamic Law and its legal heritage of fairness and justice in a manner that is reasonable and cost effective. These proceedings must be conducted in accordance with the law of the land; local, state and federal within the United States. Through effective mediation and arbitration, decisions can be made that are stipulated in the Shari'ah and adhering to the binding, ethical and legal code that exists within this country with the final approval of the relevant courts and judges.

The Islamic Tribunal seeks support and guidance from consultants and counselors to its attorneys to ensure that local, state and federal law are strictly conformed to and decisions that originate from the Tribunal are in accordance with said laws.

While its stated purpose is religious in nature (and specific to Islam), the practice described is neither new nor unusual. Mediation and arbitration are common practices to circumvent the escalation of disputes to civil court, often employed by people facing a family law issue (such as a pending divorce or the details of a child custody agreement). In business arrangements, parties frequently sign agreements mandating disputes first go to arbitration before any legal action is taken. Disputes resolved through mediation or arbitration are not enforceable unless confirmed by a court, and even decisions reached by binding arbitration (which the Texas Islamic tribunal does not claim to render) can be challenged:

Furthermore, the Islamic Tribunal in Dallas is by no means the only faith-based mediation entity operating in the United States. One such mediation service with a Christian focus describes their service thusly on their web site:

Peacemaker Ministries is a non-profit, non-denominational ministry whose mission is to equip and assist Christians and their churches to respond to conflict biblically. We provide conflict coaching, mediation and arbitration services to help resolve lawsuits, family conflicts, business disputes, and church divisions. Our training services include seminars, conflict coaching training, mediation training, advanced mediation and arbitration training for conciliators and church leaders working within their churches, as well as training for individuals conducting more formal and complex proceedings.

The dayanim who sit on cases include leading authorities on Jewish law, as well as lawyers and businessmen who are familiar with secular law and contemporary commercial practices. When appropriate, the Beth Din will either include expert professionals on an arbitration panel, or consult them as expert witnesses. Cases are decided under Jewish law, through the prism of contemporary commercial practice and secular law.

Prior to having a case heard by the Beth Din, litigants are required to enter into a binding arbitration agreement. The Beth Din conducts its proceedings in a manner that is consistent with the requirements of secular arbitration law, so that the rulings of the Beth Din are legally binding and enforceable in the secular court system.

So while there is an Islamic mediation center in Dallas, the tribunal neither possessed nor claimed any ability to supersede extant laws in its jurisdiction, either civil or criminal. Parties are not obligated to participate in the mediation it offers, nor does the center have any power to operate outside the law or enforce any settlements it may reach. Similar faith-based mediation centers are offered as an alternative to costly litigation, but ultimately, all citizens and residents of the United States are subject to the laws of its jurisdictions, and no such entity has the ability to override existing laws or enforce illegal contracts or agreements.

Dallas' D Magazine published an article that addressed various political responses to the media controversy over the Islamic mediation center, including the Irving City Council's voting in favor of a bill "that would forbid such tribunals from using foreign law in their rulings (which is already illegal)":

A few facts worth noting:

Most important, the tribunal is not affiliated with the Islamic Center. Imam Zia is one of four members who constitute the tribunal. Its official address is in North Dallas, but the tribunal meets about twice a month for hearings wherever they can find a suitable office (usually in Arlington).

Second: despite [Mayor] Van Duyne's claims, the city of Irving has taken no stance on the center or the tribunal (which, again, isn't even in Irving). It did issue a statement saying that the city wants residents to obey the law and that Irving "is proud to have one of the most diverse ZIP codes in the United States."

The Houston Chronicle dubbed rumors about Sharia courts "2015 Texas Hoax of the Year," making many of the same points about it that we did:

An Islamic tribunal does operate in the Dallas area, and has done so for several years. But the imams that run the panel do not usurp state or federal law. What exists is a forum where Islamic scholars help settle business disputes and other non-criminal matters. The rulings are nonbinding and work within the guidelines of U.S. law.

This is explicitly stated on the tribunal’s website: “These proceedings must be conducted in accordance with the law of the land; local, state and federal within the United States.”

Similar religious mediation services exist throughout the U.S. — for Christians, Jews and other devout worshipers — as a way to avoid heading to a civil court. These panels prevent private matters from turning into expensive, public affairs.

Since 1925, when Congress enacted the Federal Arbitration Act, U.S. law has been very open to the idea of private dispute resolution, said Lee Ann Bambach, a Georgia-based attorney who has a Ph. D in religion from Emory University. Her dissertation was titled "Faith-Based Arbitration by Muslims in an American Context."

“Those who would jump up and down about these so-called Sharia courts, which are really just alternative dispute resolution forums, will speak very highly of Christian reconciliation,” which is based on Biblical teachings, Bambach said.

The Islamic tribunals can benefit Muslim women by allowing them to receive a religious divorce. A women can receive a divorce from a U.S. civil court, but if she wants to remarry in the faith, then a religious divorce is warranted. In cases where the husband does not want to grant a divorce, a Muslim woman can make a case to a tribunal, but they are not always granted. Religious courts in Catholicism and Judaism perform similar acts for observers.

Still, a number of right-wing lawmakers have tried to pass either toothless or unconstitutional bills targeting the Islamic tribunals. They do so without any evidence that Sharia Law is causing an issue in their district.