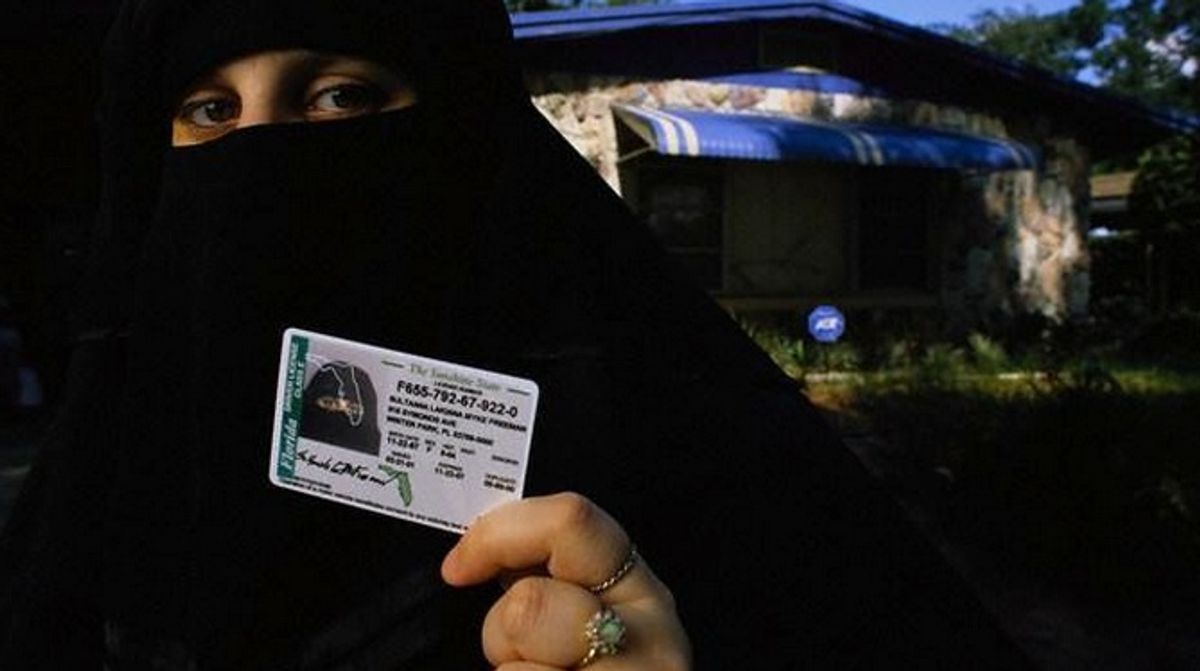 Origins: On 15 August 2015, the web site Bare Naked Islam published an article titled "SHARIA-COMPLIANT ILLINOIS will now allow Muslim headbags to be worn in official driver license photos." (A condensed version of the article was republished on 17 August 2015 to the similarly unreliable web site Jews News.)

Bare Naked Islam insinuated that regulations were being relaxed in response to complaints from Muslim residents specifically, referencing a July 2015 document [PDF] issued by the Secretary of State to Illinois DMV offices regarding religious headwear (described pejoratively in that article as "headbags"):

After complaints from Muslim extremist groups, the state of Illinois is reportedly telling DMV workers that anyone wearing a religious head covering doesn’t have to take it off for a driver’s license or photo ID.

As the excerpt above indicates, the claim was primarily lifted from an article titled "Illinois is taking a step toward preventing Sikh and Muslim discrimination at the DMV," published to the web site Fusion on 14 August 2015. Later iterations bore little resemblance to the initial piece; while the Council on American-Islamic Relations (CAIR) was cited as the primary force behind the flyer in two articles linked above, Fusion reported that a Sikh (not Muslim) advocacy group also prompted the guideline reiteration:

The Sikh American Legal Defense and Education Fund (SALDEF) took the issue to Illinois’ Secretary of State’s office about a year ago after Sikh community members complained that they had been asked to remove their dastaars, the turban Sikhs wear around their heads.

“A little over a year ago we had been getting complaints from around the states from Sikh Americans who were being asked to remove or modify their turbans to get their photo ID,” said Jasjit Singh, SALDEF’s Executive Director.

SALDEF consulted with the Chicago chapter of the Council on American Islamic Relations (CAIR) and other local advocacy groups and found that Muslims in Illinois were also being asked to remove their religious head coverings (hijabs or niqabs worn by some women). At that point, they decided they needed to take the issue to the Illinois state government, and worked with the Illinois Secretary of State.

Learn about @cairchicago's work with @SALDEF, @SAAPRIChicago, and @MALDEF for religious accommodation at #DMV! https://t.co/HsuBBPzQqY

But Fusion's article clearly indicated SALDEF (a Sikh group) as well as CAIR (a Muslim group) was largely responsible for the reiteration of existing guidelines (a description in line with statements from SALDEF and CAIR on Twitter and elsewhere):

Victory! Sikhs In Illinois Can Continue to Wear Turbans on IDs. https://t.co/kMKXeDUnQD. Many thanks to our partners! pic.twitter.com/KCeT6oJc89

No change has actually taken place to our procedures. What we’re doing was always allowed the religious head coverings of this nature but what we want to ensure is that the public’s aware of them because we were told that some individuals were unaware that they could have their photo taken for the drivers license wearing them. We’re always mindful of the fact that we want to communicate well with the public.

It bears mentioning that Haupt phrased his comment to suggest residents were unaware of the religious exemptions, whereas SALDEF indicated DMV employees asked Sikh residents to remove their legally permitted religious headwear. SALDEF asserted that was the case in a 13 August 2015 press release about the issue:

SALDEF received reports that Sikh Americans and members of other communities, like the Muslim community, in Illinois were being asked to remove dastaars and/or modify their articles of faith in order to get their driver’s licenses. SALDEF engaged directly with Drivers Service Department in order to secure the needed religious accommodations for Sikhs and members of other faiths. As a result, the Department has published a poster and handout on religious accommodation of Sikh Americans, which is being shared with every office in the State as well as the public.

Some interpretations of this item claim that Muslims are now allowed to pose for driver's license photographs in Illinois with everything but their eyes obscured. However, the Illinois Religious Accommodation Guide covering driver's licenses and other forms of state-issued ID specify that Muslims (and Sikhs) may wear head coverings (such as hijabs) in photographs, not face-covering garb (such as burqas): On 25 August 2015, Haupt clarified in an email to Snopes that a person's face cannot be obscured in a driver's licence photo:

Illinois law allows a person to wear a religious head covering when photographed for their driver’s license or identification card, provided it does not cover the person’s face. This is because the photograph plays an integral part of identifying the holder of the driver’s license and identification card. To clarify further with an example, a head scarf covering the hair of a customer would be allowed, but an article of clothing covering the entire face, except the eyes, would not be allowed. In addition.... we did not change any procedures; this has simply been a public awareness effort to ensure that customers and employees are aware of the long-standing procedures that govern photos for driver's licenses and identification cards in Illinois.

It's true that the state of Illinois issued a flyer to DMV offices in July 2015 about extant exemptions for religious headwear in driver's license photos. But the guidelines were neither new nor reissued under pressure from "Muslim extremists"; a Sikh advocacy group (who consulted with a Muslim advocacy group) prompted the flyer's issuance after they said Sikh residents complained about being asked to remove religious headgear for state-issued identification photos. Finally, Bare Naked Islam described CAIR as a "designated terrorist group," which was a misleading claim at best:

Two American groups that represent Muslims — the Council on American-Islamic Relations (CAIR) and the Muslim American Society — had been designated terrorist groups by the [United Arab Emirates].

Neither CAIR nor the Muslim American Society are designated terror groups by the U.S. government, which is a major ally and trading partner of the U.A.E., and their inclusion on the list surprised many analysts — especially when more established groups such as Hamas and Hezbollah in Lebanon were left off. CAIR put out a statement that said they were seeking clarification on their "shocking and bizarre" inclusion on the list, while the Muslim American Society said that they had had "no dealings with the United Arab Emirates" and were "perplexed by this news."