Rumors about a repeal of the ACA, also known as Obamacare, were alarming to many but mostly inaccurate. 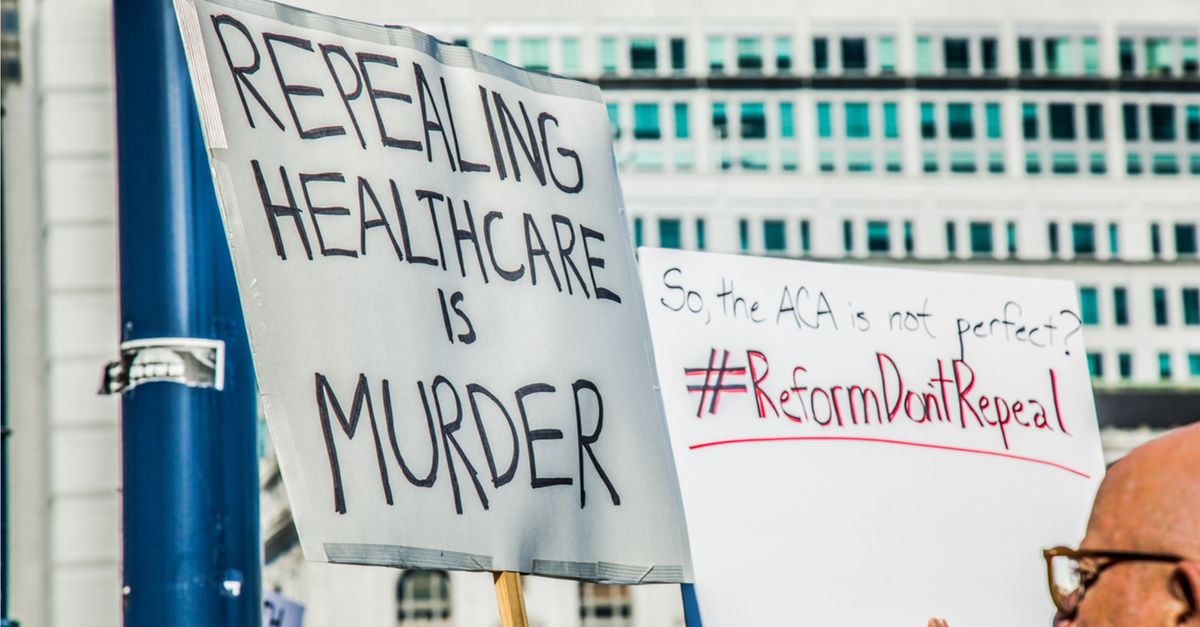 The United States Senate voted 51-48 to approve a budget that would allow the repeal of the Affordable Care Act.

The senate did not vote to repeal the Affordable Care Act on 12 January 2017.

On 12 January 2017, the United States Senate voted 51 to 48 to approve a budget resolution for the upcoming year. At the time of its passage, many news outlets reported that the Senate was "one step closer" to repealing the Affordable Care Act:

The Senate took a crucial step to pave the way toward repealing Obamacare early Thursday morning, passing a budget resolution that would let Republicans’ eventual repeal bill move through the chamber with just 51 votes.

The measure passed 51-48, with every Senate Democrat present opposing it, and every Senate Republican except Sen. Rand Paul (R-KY) supporting it.

If the House of Representatives passes the same measure — and they plan to do so later this week — it will go into effect, and make sure that Obamacare repeal cannot be filibustered by Senate Democrats.

Shortly after this budget was approved, a viral message started circulating on Facebook which claimed that the Senate had voted to immediately repeal several individual provisions afforded by the ACA:

1. To end coverage for preexisting conditions, veterans benefits, and aid to rural hospitals.
2. To remove discrimination protection for women in healthcare.
3. Against the provision allowing children to remain on their parent's insurance till the age of 26.
4. To cut off funding for the Child Health Insurance Program (CHIP).
5. Against ACA contraceptive coverage and maternity care provision.
6. To direct committees to send budget legislation to defund and repeal the Affordable Care Act.

For those who get health insurance through work, no pre-existing conditions.

Lifetime caps for coverage are back for everyone.

Despite their assertions of this being an action to "repeal and replace," no viable alternative plan has been proposed.

As of this moment, no replacement exists.

The message continued to be shared on social media for weeks, making the warning that the "House votes Friday" outdated. On 13 January 2017, the House voted 227 to 198 to approve the budget blueprint:

The House cleared the way on Friday for speedy action to repeal the Affordable Care Act, putting Congress on track to undo the most significant health care law in a half-century.

With a near party-line vote of 227 to 198, the House overcame the opposition of Democrats and the anxieties of some Republicans to approve a budget blueprint that allows Republicans to end major provisions of President Obama’s health care law without the threat of a Democratic filibuster in the Senate.

The viral Facebook post does list several provisions afforded by the ACA, and the United States government did start passing legislation that could conceivably lead to the repeal of President Barack Obama's signature health law in early 2017.  However, the Senate did not explicitly vote on 12 January 2017 to repeal the Affordable Care Act.

Another message about a potential repeal also appeared on social media at the same time. While the previous message exaggerated the Senate's 51-48 vote, the following message attempted to warn people about what could happen if the health care law was repealed:

Friends ... just a reminder that even if you are safely covered behind employer-provided insurance, the protections set forth in the ACA (Affordable Care Act), apply to you too. And if those protections are repealed along with the rest (or any part) of the program, you will also be affected.

That means you may be trapped in a job, because your pre-existing condition may mean you will not qualify for new insurance offered by another employer, and the cost of private insurance would be prohibitive. If your employer shuts down, lays you off, or even changes insurers, well, you are out of luck. The Senate GOP voted this week that they would not require an eventual ACA replacement to protect against discrimination for pre-existing conditions, which was the standard before the ACA.

It means that you (a young adult under the age of 26) or your adult children (over 18) may find yourselves without the protection of insurance, as the Senate GOP voted last night that an eventual ACA replacement will not be required to allow young people to remain on their parents' insurance up to the age of 26.

It means that if you have a high-risk pregnancy, or life-threatening illness such as cancer, you may not be able to afford all the care you need, because you may hit lifetime or annual caps. If you have an infant born with any kind of severe medical condition, or premature, they may hit their lifetime insurance cap before they are old enough to walk. The Senate GOP voted last night that an eventual ACA replacement program would not be required to prohibit lifetime insurance caps.

It means that if you are a struggling parent who is uninsured or under-insured, you will no longer be able to count on at least your kids getting the routine medical and dental care they need under the Children's Health Insurance Plan (CHIP). The Senate GOP voted that CHIP is not required to be protected by an eventual ACA replacement.
These provisions of the ACA affect everyone in this country, not just those without insurance through their employers.

Much of the focus on repealing the Affordable Care Act has been on the millions of people who will lose their health insurance. However, as noted in the post above, the ACA actually affects many people beyond those who directly purchased insurance through the government marketplace:

Much of the recent attention on the future of the Affordable Care Act (ACA) has focused on the fate of the 22.5 million people likely to lose insurance through a repeal of Medicaid expansion and the loss of protections and subsidies in the individual insurance market. Overlooked in the declarations of who stands to lose under plans to “repeal and replace” the ACA are those enrolled in employer-sponsored health plans — the primary source of coverage for people under 65.

Job-based plans offered to employees and their families cover 150 million people in the United States. If the ACA is repealed, they stand to lose critical consumer protections that many have come to expect of their employer plan.

The ACA also placed limits on out-of-pocket limits, prevented insurance companies from denying coverage to those with pre-existing conditions, and extended coverage to dependents until the age of 26.

The Facebook post does list some of the provisions that would potentially be lost with the repeal of the ACA, it does not take into account what will be in the the legislation that is to be written in order to replace it. For instance, President Trump said that he wanted the replacement for the ACA to continue coverage for pre-existing conditions. As Republicans have not yet introduced an official replacement, it is as yet difficult to tell exactly how health insurance in the United States will change as a result, or indeed if it will change at all.