Were Seesaws Installed at the U.S.-Mexico Border?

We saw a seesaw, but we don't see the seesaw we saw anymore. 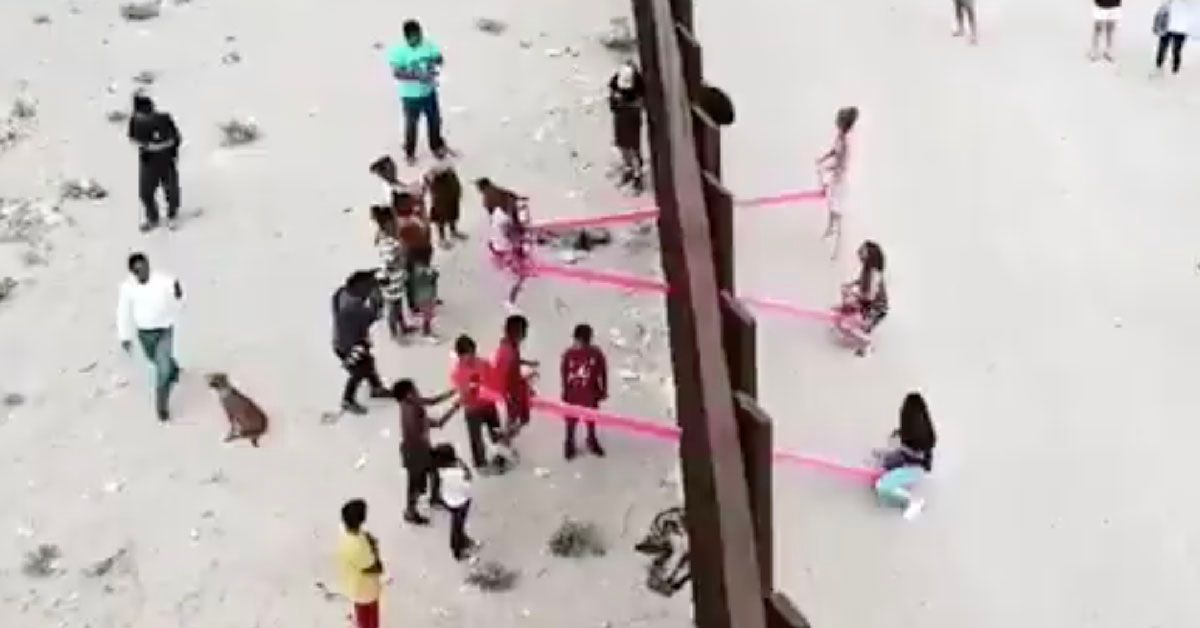 Claim:
An artist installed seesaws at the border of the United States and Mexico.
Rating:

A group of artists temporarily installed seesaws along the border of the United States and Mexico in New Mexico in July 2019.

This was not a permanent installation. The seesaws were up for about a day before being taken down.

On July 29, 2019, a video supposedly showing several seesaws installed across the border wall between Mexico and the United States went viral on social media:

Artists installed seesaws at the border wall so U.S. and Mexico kids could play together.

This is so pure and so beautiful ?pic.twitter.com/rU3K6lLKO5

This is a genuine video of seesaws installed through slats in the border wall in New Mexico. However, this was not a permanent installation. As of this writing, the seesaws are no longer there.

California professors Ronald Rael and Virginia San Fratello first came up with the idea of border seesaws while exploring alternatives to a traditional border wall in 2009. Rael and Fratello brought the project to life in July 2019 with the help of a group of artists in Juarez, Mexico.

Rael posted several photographs and videos of the "Teetertotter Wall" to his Instagram page, along with a message explaining the idea behind the project:

One of the most incredible experiences of my and @vasfsf’s career bringing to life the conceptual drawings of the Teetertotter Wall from 2009 in an event filled with joy, excitement, and togetherness at the borderwall. The wall became a literal fulcrum for U.S. - Mexico relations and children and adults were connected in meaningful ways on both sides with the recognition that the actions that take place on one side have a direct consequence on the other side. Amazing thanks to everyone who made this event possible like Omar Rios @colectivo.chopeke for collaborating with us, the guys at Taller Herrería in #CiudadJuarez for their fine craftsmanship, @anateresafernandez for encouragement and support, and everyone who showed up on both sides including the beautiful families from Colonia Anapra, and @kerrydoyle2010, @kateggreen , @ersela_kripa , @stphn_mllr , @wakawaffles, @chris_inabox and many others (you know who you are). #raelsanfratello #borderwallasarchitecture

"There is no playground along the U.S.-Mexico border wall in New Mexico. On the evening of July 28, U.S. Border Patrol agents encountered a small group who identified themselves as local university faculty/staff at the border wall. They had placed boards through the wall and appeared to be playing with residents of Mexico while recording the engagement. The group removed the boards and left the area without incident after it was established that there was no advance coordination. Agents ensured that no people/goods were crossed during the encounter."