This rumor surfaced in a tweet after Cassidy Hutchinson testified in front of the U.S. House Jan. 6 panel. 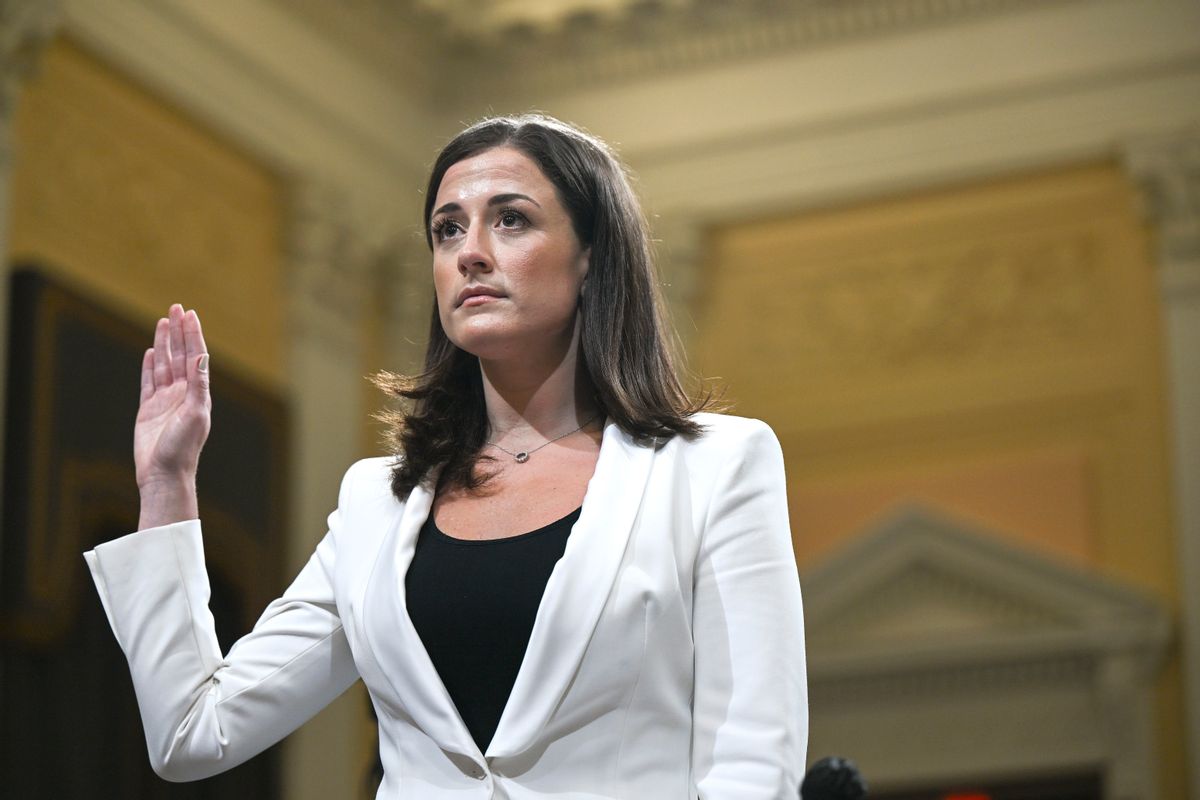 Claim:
As of the morning of June 29, 2022, evidence showed the U.S. Secret Service had officially debunked ex-White House aide Cassidy Hutchinson's testimony that she gave under oath before the U.S. House Jan. 6 panel.
Rating:

In the early morning hours of June 29, 2022, author Nick Adams tweeted that the U.S. Secret Service had "officially debunked slanderous claims" against former U.S. President Donald Trump that were purportedly made on the previous day by ex-White House aide Cassidy Hutchinson in front of the U.S. House Jan. 6 Capitol riot panel. The end of the tweet asked, "Will the fact checkers correct the record?"

Adams also later tweeted that Hutchinson had been "exposed by the United States Secret Service as a fraud," apparently asserting that her credibility had been called into question. However, the truth was that these tweets were misleading. Prior to these two tweets being posted, the Secret Service had not "officially debunked" anything Hutchinson said, nor did the agency do so in any of the following days that same week.

Hutchinson previously served in the West Wing of the White House as a special assistant and aide to Trump’s chief of staff, Mark Meadows. The House select committee investigating the Jan. 6 attack on the U.S. Capitol spent the opening minutes of its June 28 hearing by establishing Hutchinson's close proximity to the former president's activities in the days and weeks around Jan. 6.

Aside from the claim made by this rumor, perhaps the key takeaway from Hutchinson's testimony was her recounting that Trump and Meadows both knew of the dangerous threat of violence on Jan. 6, including that of armed supporters near Trump's rally, and that neither man chose to act sooner to prevent or stop the attack on the Capitol. Trump even wanted to join the crowd, just as he said into the microphone at his own rally on the Ellipse.

Adams himself did not specifically include in the tweets what "slanderous claims" he was referring to in regard to Trump from Hutchinson's testimony. However, CBS News, NBC News, The Independent, and others published what was then the only known statement from the Secret Service. The reporting in these articles specifically referenced Hutchinson's testimony about the moments after Trump was driven away from the site of his Ellipse speech on Jan. 6, 2021.

The Secret Service statement, which did not debunk Hutchinson's testimony, read as follows:

The United States Secret Service has been cooperating with the Select Committee since its inception in spring 2021, and will continue to do so, including by responding on the record to the Committee regarding the new allegations surfaced in today’s testimony.

Trump in the Suburban

During Hutchinson's testimony, she was asked by the select committee's vice chair, U.S. Rep Liz Cheney, R-Wyoming, to recount the moments after Trump was driven away from his speech on the Ellipse on Jan. 6. Hutchinson's remarks referenced Bobby Engel, whom she referred to as the head of Trump's Secret Service detail, as well as another security official named Tony Ornato, who also served as the White House deputy chief of staff.

Hutchinson testified that Ornato told her in his office in the West Wing, with Engel in the room, that Trump became angry in his Suburban after being informed he was being driven back to the White House. The president had previously told the crowd at his rally that he would be walking with them to the Capitol. (Note: Hutchinson referred to the presidential limousine known as "The Beast." However, Trump rode in a Suburban that day.)

According to the testimony, Trump believed he was going to be driven to the Capitol following his speech. Hutchinson said:

Tony [Ornato] described him as being irate. The president said something to the effect of, "I'm the f'ing president, take me up to the Capitol now," to which Bobby [Engel] responded, "sir, we have to go back to the West Wing." The president reached up towards the front of the vehicle to grab at the steering wheel. Mr. Engel grabbed his arm, said, "sir, you need to take your hand off the steering wheel. We're going back to the West Wing. We're not going to the Capitol."

Mr. Trump then used his free hand to lunge towards Bobby Engel. And Mr. — when Mr. Ornato had recounted this story to me, he had motioned towards his clavicles.

Shortly after Hutchinson's testimony on June 28, NBC News reported that neither Ornato nor Engel had responded to its request for comment, but that a spokesperson for the Secret Service said that its personnel "are available to testify under oath":

NBC News has reached out to both Ornato and Engel for comment; neither has responded.

Secret Service spokesman Anthony Gugliemi told NBC News that the Secret Service has communicated to the Department of Homeland Security that any and all personnel requested by the Jan. 6 committee are available to testify under oath, responding to Tuesday's allegations. The Secret Service is part of DHS.

NBC News chief White House correspondent Peter Alexander, who collaborated with colleague Allan Smith on the reporting, also posted the news on Twitter, tweeting, "A source close to the Secret Service tells me both Bobby Engel, the lead agent, and the presidential limousine/SUV driver are prepared to testify under oath that neither man was assaulted and that Mr. Trump never lunged for the steering wheel." This development was also broadcast on "NBC Nightly News" that night.

A subsequent tweet from Alexander read, "A source close to the Secret Service says both men dispute Trump grabbed the steering wheel or assaulted an agent. They do not deny that Trump was irate and demanded they drive to the Capitol." The Washington Post's Carol Leonnig reported much the same, as did CBS News.

Scott Wong and Peter Nicholas also reported for NBC News that "parts of Hutchinson’s testimony involving Trump’s car ride back to the White House after his Jan. 6 rally at the Ellipse have been validated by others," and that "one person close to the Secret Service said that 'there are very important pieces of the testimony that are out there that [agency officials] have no issue with. … We don’t want to lose the forest for the trees.'"

In response to some of these partial denials of the Suburban story that were being reported, Jody Hunt, Hutchinson's lawyer, tweeted, "Ms. Hutchinson testified, under oath, and recounted what she was told. Those with knowledge of the episode also should testify under oath."

Despite all of this, none of the reporting amounted to what Adams had claimed in regard to the unsupported idea that the Secret Service "officially debunked" Hutchinson's claims.

Alyssa Farah Griffin, a former Trump White House communications director, also said during the same week as the hearing that she was the person who originally put Hutchinson in touch with the select committee. She quote tweeted Troye's tweet, adding, "Tony Ornato lied about me too."

It did not appear that Ornato had responded to these tweets from Troye or Griffin.

On July 1, CNN reported that it had made contact with "two Secret Service sources who say they heard about the incident" involving Trump in the Suburban "from multiple agents, including the driver of the presidential SUV where it occurred."

The reporting said that the details of the moments in the Suburban differed among multiple accounts from Secret Service agents. However, the idea that Trump was involved in an angry confrontation was found to be consistent among the agents' accounts:

"He had sort of lunged forward -- it was unclear from the conversations I had that he actually made physical contact, but he might have. I don't know," the source said. "Nobody said Trump assaulted him; they said he tried to lunge over the seat -- for what reason, nobody had any idea."

The employee said he'd heard about the incident multiple times as far back as February 2021 from other agents, including some who were part of the presidential protective detail during that time period but none of whom were involved in the incident.

The article continued by providing information about a third source that CNN had cited in previous reporting. That third source, identified as a "Secret Service official," had "denied that Trump grabbed at the steering wheel or lunged toward an agent on his detail, and that Ornato denied telling Hutchinson the same." However, that same official "did not dispute that Trump directed his agents to take him to the Capitol," which again, was perhaps the larger story of the day.

CNN also reported that "Ornato has a close relationship with Trump and his team" after previously serving "as head of his protective detail and then being granted an unusual leave from his Secret Service duties to be detailed to the White House as deputy chief of staff for operations."

CBS News reported that the Secret Service had already "provided dozens of hours of testimony to the Jan. 6 committee" and that both Ornato and Engel also previously provided testimony behind closed doors:

According to the source close to the agency, both Ornato and Engel have appeared before the committee on the record and behind closed doors, at the committee's request. Those sessions were recorded, but not used in Tuesday's hearing.

On June 29, U.S. Sen. Lindsey Graham, R-S.C., tweeted about the baseless rumor involving Hutchinson, "If it is true the Secret Service denies the allegations against President Trump of lunging and assaulting officers, then the story is really passing along gossip that did not bear fruit."

The keywords from Graham's tweet appeared to be "if it is true." Graham was referring to one of his previous tweets where he promoted a Fox News article. The article's headline read, "Tony Ornato did not brief Cassidy Hutchinson that Trump tried to lunge at Secret Service agent: sources." The story contained no information about the Secret Service having "officially debunked" Hutchinson's testimony, as Adams' tweet claimed.

On July 2, 2022, additional reporting was added to this story from The Washington Post, CNN, and NBC News, including further accounts from sources who spoke on the incident involving Trump in the Suburban.