Did a Woman Find a 'Secret Room' Behind the Bathroom Mirror of Her Apartment?

Samantha Hartsoe ignored the lesson learned by many a horror movie character and went in there. 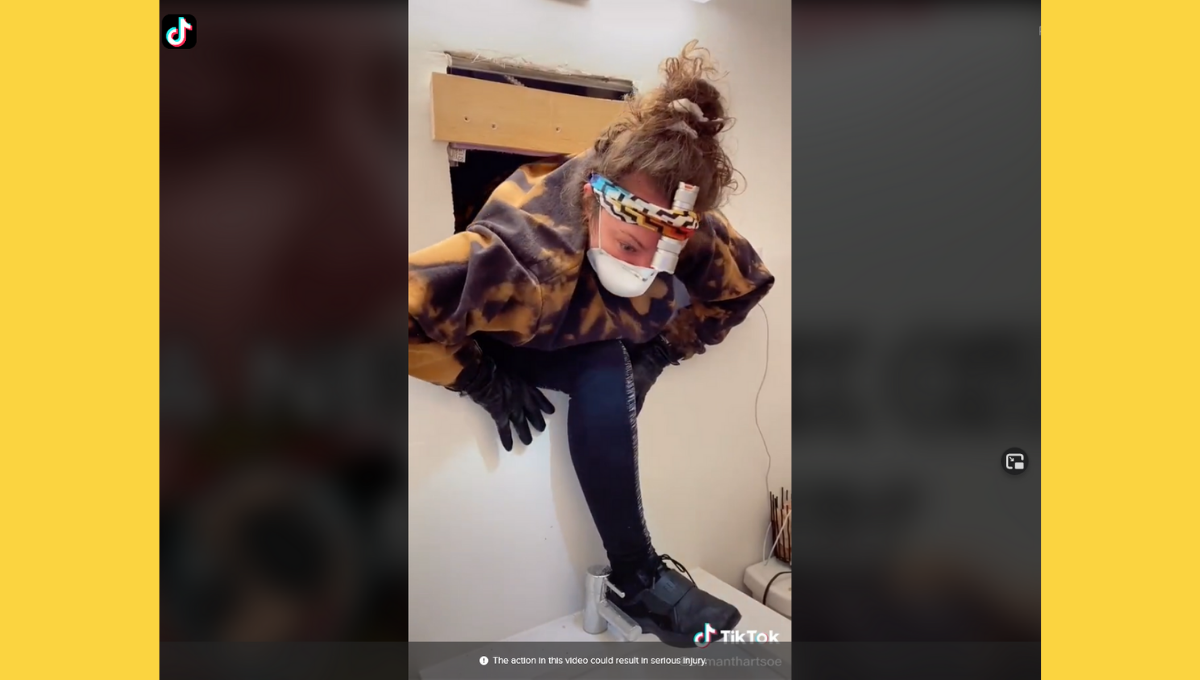 Claim:
New York City resident Samantha Hartsoe found a "secret" room connected to her apartment through a hole behind her bathroom mirror.
Rating:

New York City resident Samantha Hartsoe found an empty apartment next to her own which could be accessed through a hole in the wall behind her bathroom mirror.

However, after crawling through the hole and exploring the space behind her bathroom wall, Hartsoe found evidence (trash bags and a water bottle) that indicated the room wasn't exactly a "secret."

In early March 2021, New York City apartment dweller Samantha Hartsoe made a discovery in her bathroom that went mega-viral on the video-sharing platform TikTok.

In a four-part video series, Hartsoe described how she felt a strong breeze blowing through her unit and traced it to her bathroom mirror. The mirror, she discovered, easily came off the wall, revealing an opening to a darkened, mystery room where the bathroom wall should have been. Here is the video in the series where she explores the space:

As of this writing, Hartsoe's videos have been viewed millions of times. When asked why she thought they took off to the extent they did, Hartsoe told WNBC, "I think everybody in New York has such small apartments, you don't know what you're going to find, and everyone's hoping for more space."

The "secret room" premise is of course spooky and suspenseful. And Hartsoe adventurously braved the unknown against the advice of her roommate John, squeezing through the hole with a hammer for protection and a flashlight strapped to her forehead with a hair band, taking her viewers on the journey of discovery along with her.

The fourth video in Hartsoe's series reveals that it's not so much a "secret" room as it is an empty apartment adjacent to hers. While exploring it, Hartsoe discovered trash bags and a water bottle, indicating someone had been inside it recently (maybe the apartment building manager or a maintenance worker?). The breeze she encountered in her home was the result of the fact that someone (perhaps the aforementioned manager or maintenance worker?) had opened the windows in the empty unit.

Hartsoe spoke to real estate and architecture-oriented news site Curbed and said the unit she explored had three bedrooms and was totally torn up, appearing as though no one had lived there for a long time and may have been in the process of renovation. She also said that it had an exit into her apartment building's hallway, through which she made her way back to her own apartment.

Hartsoe's now-viral adventure landed her an appearance on the talk show "Ellen," where host Ellen Degeneres gifted her with a new bathroom vanity set-up (with no hole behind the mirror) and $10,000.