Did Lack of Social Distancing in 1918 Pandemic Cause More Deaths Than WWI?

A viral meme about the "Spanish flu" pandemic gets some general points right, but the presented timeline is inaccurate. 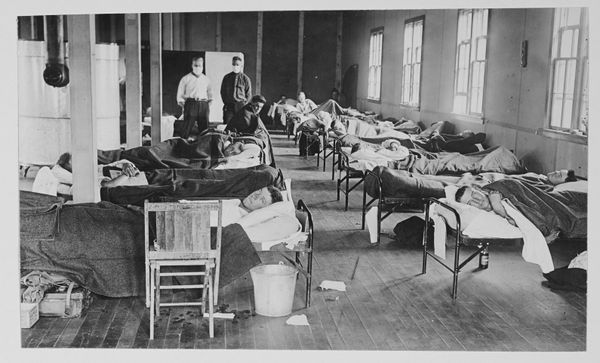 Claim:
People started to ignore social distancing rules during the 1918 pandemic, leading to a second wave of infections that killed more people than all of World War I.
Rating:

More people died during the 1918 flu pandemic than in all of WWI, with the majority of deaths occurring during the deadly second wave of the influenza outbreak. In general, places that disregarded social distancing rules saw more influenza cases.

However, the second wave of the influenza outbreak started before the end of WWI and was largely fueled by sickened soldiers traveling home to hospitals, not people disregarding social distancing rules.

In mid-April 2020, as some U.S. cities saw crowds of people protesting against shelter-in place or stay-home orders implemented to slow the spread of the COVID-19 coronavirus disease, a meme started circulating that claimed the majority of deaths during the 1918-19 pandemic occurred after people started to ignore social distancing guidelines: There is a lot of truth in the above-displayed meme, for instance:

However, the timeline presented in this meme is inaccurate and, contrary to what the text implies, the second wave of this pandemic was not fueled mainly by a lack of social distancing.

The 1918 pandemic, commonly known by the misnomer "Spanish flu," left at least 50 million people dead around the world, including 675,000 in the United States. Comparatively speaking, about 20 million soldiers and civilians died in WWI. There were three waves of illness during this pandemic, which started in the spring of 1918 and subsided in the summer of 1919, the most deadly of which was the second wave that peaked in the fall of 1918.

We haven't been able to definitively determine the percentage of deaths that occurred during the deadly second wave. We can say, however, that the U.S. saw close to 200,000 deaths from the pandemic in October 1918 alone. The U.S. lost approximately 115,000 soldiers during all of WWI.

While the majority of deaths did occur during the second wave, these deaths can't be solely attributed to a lack of social distancing after the war. In fact, a timeline of the 1918 pandemic from the Centers for Disease Control and Prevention (CDC) notes that the second wave started in September 1918, approximately two months before Germany officially surrendered on Nov. 11, ending WWI.

History.com notes that the second wave of the 1918 pandemic was largely fueled by sickened soldiers who traveled to countries across Europe, the U.S., and Africa:

While the global pandemic lasted for two years, the vast majority of deaths were packed into three especially cruel months in the fall of 1918. Historians now believe that the fatal severity of the Spanish flu’s “second wave” was caused by a mutated virus spread by wartime troop movements ...

In late August 1918, military ships departed the English port city of Plymouth carrying troops unknowingly infected with this new, far deadlier strain of Spanish flu. As these ships arrived in cities like Brest in France, Boston in the United States and Freetown in west Africa, the second wave of the global pandemic began.

“The rapid movement of soldiers around the globe was a major spreader of the disease,” says James Harris, a historian at Ohio State University who studies both infectious disease and World War I. “The entire military industrial complex of moving lots of men and material in crowded conditions was certainly a huge contributing factor in the ways the pandemic spread.”

While military parades and a lack of social distancing at the end of the war did not cause the second wave of the 1918 pandemic, they did exacerbate the problem.

Much like today, many cities in the U.S. closed schools, businesses, and other public spaces during the 1918 pandemic. (You can read some old news clippings urging social distancing here.) These actions were largely successful in slowing the spread of the disease, as noted in a recent study from the Journal of the American Society of Cytopathology:

A recent analysis concluded that in some cities (San Francisco, St. Louis, Milwaukee, and Kansas City), where the measures were implemented early, they reduced transmission rates by up to 30–50%. Cities that implemented such measures earlier had greater delays in reaching peak mortality, and had lower peak mortality rates and lower total mortality. The duration that these “social distancing” measures were kept in place correlated with a reduced total mortality burden.

There are also several historical examples of cities that flouted these rules, only to see an increase in influenza cases. Philadelphia, for instance, hosted a 200,000-person parade about 10 days after they saw their first deadly case of the "Spanish flu" in September 1918. St. Louis was also scheduled to hold a parade around this time, but they canceled the event due to the pandemic. Unsurprisingly, Philadelphia would wind up with a death rate more than twice that of St. Louis:

The deaths due to the virus were estimated to be about 385 people per 100,000 in St Louis, compared to 807 per 100,000 in Philadelphia during the first six months — the deadliest period — of the pandemic.

To sum up: The 1918 pandemic left an estimated 50 million people dead, which is more than double the death toll of WWI. While a disregard of social distancing rules did result in an increase in influenza cases, Armistice Day parades commemorating the end of WWI were not the cause of the deadly second wave, as it was already underway by the time WWI came to an end.

Pambuccian, Stefan.   “The COVID-19 Pandemic: Implications for the Cytology Laboratory.”       Journal of the American Society of Cytopathology.   26 March 2020.