Did Seattle Police Chief Tell Residents 'We Cannot Enforce the Law, You Are On Your Own'? 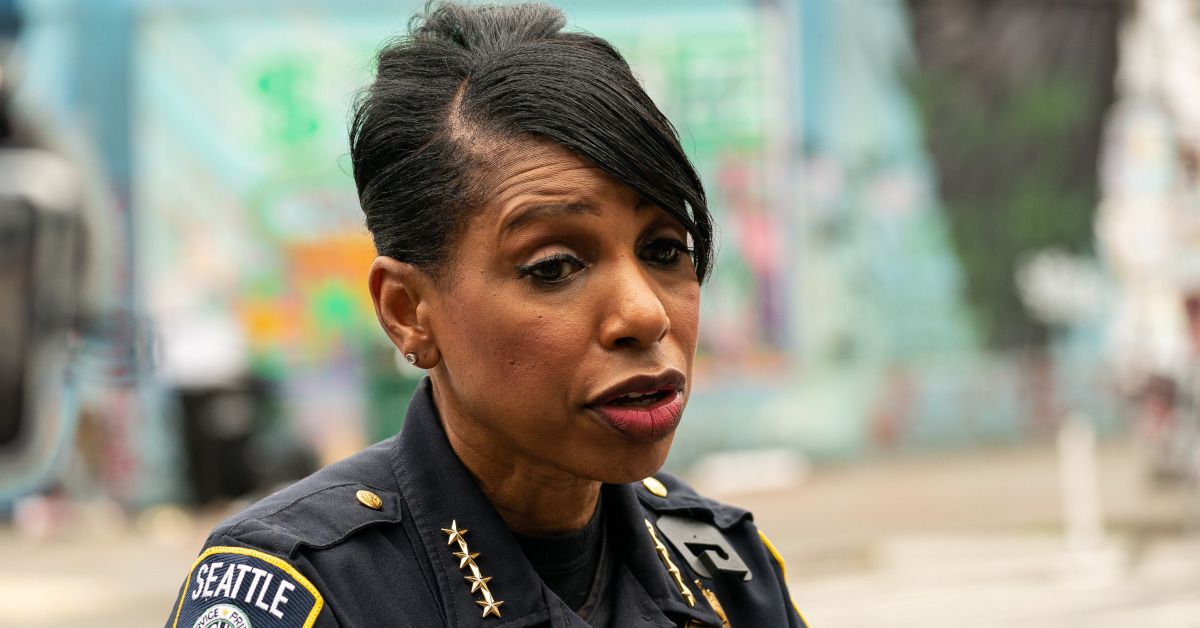 Claim:
In a letter in July 2020, Seattle Police Chief Carmen Best told residents and business owners, "We cannot enforce the law. You are on your own," or words to that effect.
Rating:

On July 24, Seattle Police Chief Carmen Best wrote to residents that a city ordinance prohibiting police from using "crowd control weapons" would mean her officers would have "no ability to safely intercede to preserve property in the midst of a large, violent crowd."

Best did not utter or write the words falsely attributed to her as a direct quotation. Her statements, in the July 24 letter, were much more narrowly focused and specific than, "We cannot enforce the law," and her letter directly contradicted claims that she had, in effect, told Seattle residents, "You are on your own."

In the summer of 2020, amid nationwide protests over the death of a Black man in police custody, readers asked us to verify claims that Seattle Police Chief Carmen Best had told residents and business owners in that city, "We cannot enforce the law. You are on your own."

On Twitter and in blog posts, those words were presented in quotation marks, indicating that they were a direct quotation from remarks made, or words written, by Best. Several other sources did not place quotation marks around the words, indicating that they constituted a summary of Best's comments, rather than a direct quotation.

Seattle Police Department (SPD) confirmed for Snopes that the letter was authentic, and said it was posted to the website Nextdoor.com on July 24. The letter did not contain the words, "We cannot enforce the law. You are on your own." As such, online posts that placed quotation marks around those words misled readers by presenting them as if they were a direct quotation. Those words were also not a fair or reasonable summary of the statements made in the letter.

That legislation banned the use or possession by any city department, including SPD, of "crowd control weapons," defined as: "kinetic impact projectiles, chemical irritants, acoustic weapons, directed energy weapons, water cannons, disorientation devices, ultrasonic cannons, or any other device that is designed to be used on multiple individuals for crowd control and is designed to cause pain or discomfort."

Hence Best's assertion, in her letter, that "This ordinance bans Seattle Police officers [from] the use of less lethal tools, including pepper spray that is commonly used to disperse crowds that have turned violent." Best added: "Simply put, the legislation gives officers NO ability to safely intercede to preserve property in the midst of a large, violent crowd."

That is a much more specific and narrowly focused assertion than, "We cannot enforce the law." There are many areas of policing and law enforcement that SPD, like countless other local police forces around the country, address on a daily basis. Crowd control is just one such area. While some observers might have been alarmed by Best's warning to residents that Ordinance 126102 would substantially hamstring her officers' capacity to police a large, unruly protest, it was a misrepresentation to summarize her warning as, "We cannot enforce the law."

Similarly, Best also did not write words to the effect that Seattle residents were "on their own." Her letter began by saying that SPD was "committed to addressing life safety incidents and calls for service, and responding to ongoing demonstrations and unrest in the city." Best did not say that officers would not deal with incidents during protests, but did warn residents that her department would have an "adjusted deployment in response to any demonstrations this weekend ..."

Best therefore indicated there were certain, specific kinds of disorder and breaches of the law that she anticipated her officers' would be limited in combating, but she did not say, or imply, that SPD "cannot enforce the law."

Best and SPD have consistently opposed the provisions of Ordinance 126102, and on July 25 the U.S. District Court for the Western District of Washington granted an application by the U.S. Justice Department for a temporary restraining order, which prevented Ordinance 126102 from coming into force that weekend. In a statement published later that day, Best advised Seattle residents that "... SPD officers will be carrying pepper spray and blast balls today, as would be typical for events that carry potential to include violence ..."

In a separate but related court case, Black Lives Matter activists in and around Seattle have sued the city and the police department for, in brief, allegedly using excessive force and violating the First Amendment rights of those taking part in protests against racial injustice and police brutality in the city, which have taken place throughout the summer.

In June, U.S. District Court Judge Richard Jones issued a temporary restraining order against the city, prohibiting SPD from "employing chemical irritants or projectiles of any kind against persons peacefully engaging in protests or demonstrations." However, the order allowed exceptions in cases where police officers take "necessary, reasonable, proportional, and targeted action to protect against a specific imminent threat of physical harm to themselves or identifiable others or to respond to specific acts of violence or destruction of property." The order was later extended and is scheduled to remain in place until Sept. 30.

In clashes with some protesters on July 25, SPD deployed pepper spray, blast balls, and sponge grenades. Black Lives Matter activists have alleged that those actions amounted to a violation of Jones' restraining order, and two days later the activists filed a motion alleging contempt of court against the city and its police force, claiming that on July 25, "SPD suddenly and without warning divided the protesters into two groups and began an all-out assault. SPD officers lobbed flash-bang grenades, blast balls filled with pepper spray, and foam tipped bullets into the middle of retreating crowds."

For its part, SPD said the protests descended into a "riot" at one point, with an explosion causing damage to the East Police Precinct building and 59 officers injured over the course of the day.

Newspunch.com.  "Seattle Police Chief Sends Letters to Residents: We Cannot Enforce the Law, You Are on Your Own."   26 July 2020.

Greenberg, Jay.  "Seattle Police Chief Warns Residents: We Cannot Enforce the Law, You Are on Your Own."   NeonNettle.com.  27 July 2020.

LifeZette.  "Seattle Police Chief Telegraphs Residents: We Cannot Enforce the Law, You Are on Your Own."   27 July 2020.