Does Vid Show Seattle First Responders Turning in Boots After Being Fired Over Vaccines?

Footage of the alleged protest received more than 3 million online views — and counting. 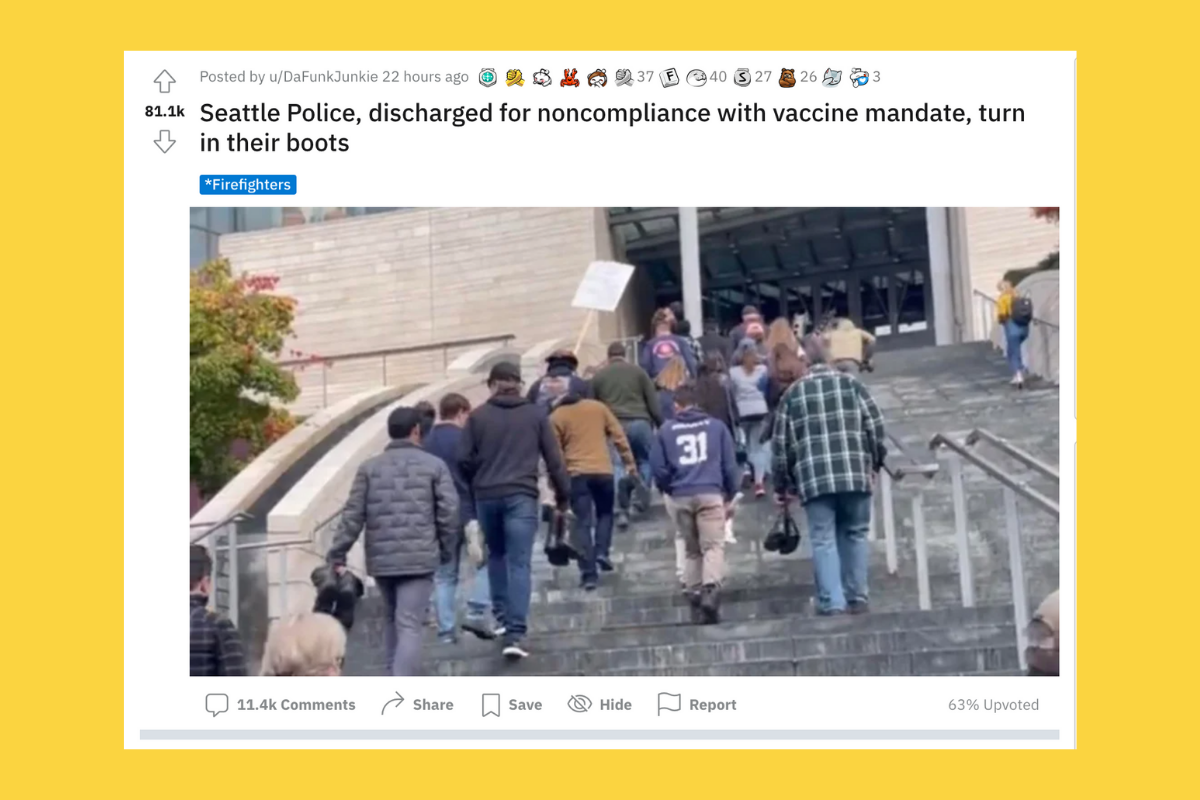 Claim:
Visual evidence that circulated widely on Oct. 19, 2021, showed former Seattle police officers and firefighters "turning in their boots" at City Hall after supervisors had fired them for not complying with the city’s COVID-19 vaccination requirement.
Rating:

Seattle Fire Department confirmed for Snopes that videos and photographs of people “turning in their boots” at City Hall on Oct. 19 in protest of mandatory vaccinations included members of the department.

City supervisors had not fired any firefighters or police officers over vaccine requirements at the time of the protest. Employees who did not submit the required vaccine paperwork were still employed; however, many were in the process of “separating” from their employer, a process that could span weeks and reverse the employees’ status.

It’s unknown if, or how many, Seattle police attended the Oct. 19 protest, based on available evidence.

In late October 2021, a roughly 30-second video clip supposedly showing first responders in Seattle who were fired for not complying with the city’s COVID-19 vaccination requirement gained millions of views on Twitter.

Simultaneously, a Reddit post depicting a screenshot of the footage rose in popularity, and media outlets such as Fox News and Newsweek drew attention to the scene supposedly showing a protest by cops and firefighters against mandatory COVID-19 vaccines. A writer for The Post Millennial, a Canadian conservative media outlet, appeared to be the source of the footage. The clip was part of a tweet thread that began shortly before 2 p.m. (EDT) on Oct. 19 with a shorter video supposedly showing the “Seattle firefighters and Seattle police officers that were fired for not complying with the vaccine mandate” serving breakfast at a park to people without stable housing. A few hours later, the writer tweeted the visual evidence referenced in the claim — a roughly 30-second clip showing the people who were at the park now walking up a flight of stairs. Some of them carried boots.

We cross-referenced the scene with an authentic picture of Seattle City Hall by photographer Joe Mabel (which we obtained via Wikimedia Commons), and confirmed the video indeed depicted an entrance to the government building. The Post Millennial writer’s tweet thread concluded with several pictures of the group inside City Hall. One photograph supposedly showed them “saying goodbyes” to each other or colleagues who presumably maintained their employment under the city’s immunization policy, and other pictures depicted them laying out the boots — apparently to symbolize their careers’ end — and praying. That latter picture showed 22 people. A local radio station, KIRO, documented the scene, as well. The media outlet interviewed someone from the group who carried boots in protest of mandatory vaccinations, Seattle firefighter Andrew Pittman. He remained employed (he said supervisors had not fired him), but he was not expecting accommodations for his “strong moral and philosophical convictions against taking the shot.”

In the same article, another firefighter, Mike Todd, told KIRO he would be “losing his job” after 27 years; however, the piece did not make explicitly clear if, or to what extent, that decision was voluntary, permanent, or related to the vaccine requirement.

Next, we sought evidence to confirm whether any Seattle police officer or firefighter had been “fired” for not complying with the vaccine mandate that took effect Oct. 18.

According to The Associated Press and The Seattle Times, it was true that some members from both departments were unable to report to work at the time of the City Hall protest (the day after the vaccine mandate took effect) because they: (A) did not submitted vaccination forms, or (B) were waiting for supervisors to approve their requests to be exempt from the mandate due to religious beliefs or medical conditions. That group included 176 police officers and firefighters all together.

We broke down the numbers. According to a statement from the Seattle Police Department (SPD)’s public affairs office, six employees (whom The Seattle Times confirmed were sworn officers, not administrative staff) declined to submit vaccination forms and were in the process of “separating” from the department.

That meant they were going through the administrative steps of resigning, retiring, or being discharged — though it was unclear which and if, or to what extent, the mandatory vaccination played a role for each of them. We reached out to SPD to answer those questions, and we were waiting for a response.

Per SPD’s manual governing department protocol, the “separation process” in discharge cases includes legal hearings where the employee can try to argue against their supervisors’ decision to end their employment. And, ultimately, those proceedings, called Loudermill hearings, determine whether they stay or leave the department.

Aside from those six cops, more than 100 SPD employees (93 of whom were also sworn officers, The Seattle Times reported) requested an exemption from the city’s vaccine requirement, according to the SPD statement. Their supervisors were in the process of reviewing their circumstances and potentially developing accommodations for them to work unvaccinated — perhaps via remote methods. However, at the time of the City Hall protest, they were unable to return to work due to the city-mandated policy and burning through paid time off.

Similar events were unfolding at the Seattle Fire Department (SFD). That agency released an Oct. 19 statement saying all but 11 employees (whose rank or position remained unknown) did not turn in vaccination forms or exemption requests. They were in the same legal process in which union-represented employees can request a Loudermill hearing.

In an Oct. 20 email to Snopes, spokesperson Kristen Tinsley wrote: “[At] this time the department has not terminated any employees due to the mandate.”

Additionally, 66 employees submitted requests for exemptions and “will be on leave and unable to work until the accommodation process is complete,” or they get the immunization, the SFD statement said. Agency leaders had already approved a portion of those requests, possibly via developing work-from-home arrangements.

Lastly, we sought evidence to confirm whether the group carrying boots in the viral footage included the six Seattle police officers and 11 employees of the fire department who did not submit vaccination forms, aside from Pittman’s interview with KIRO.

We reached out to public information officers representing both agencies asking whether the people in the video were former or current employees. Responding via emails, SPD said, “it is not possible for us to tell” whether the video showed Seattle police officers, and the Seattle Fire Department sent us this statement:

"The Seattle Fire Department’s leadership was made aware of an event occurring at Occidental Park yesterday (Oct. 19), which was reportedly organized by off-duty SFD members who are against the Mayor and Governor’s vaccine mandates. From our understanding, the event was focused on feeding breakfast to community members in the area, followed by a march to Seattle City Hall.

"The department was made aware during the event that several department vehicles and on-duty members were in attendance. The department did not authorize participation by on-duty personnel. The members assigned to those units were immediately contacted and asked to leave the event (unless dispatched to an emergency in the area).

"The photos and video presented, which show some off-duty members in uniform without masks, were provided to the department’s Equal Employment Opportunity Officer for further investigation. "

In sum, while it was true the visual evidence of people “turning in their boots” in protest of mandatory COVID-19 vaccinations included some Seattle firefighters, they were not fired. Additionally, it was unknown if, or how many, Seattle police officers participated in the demonstration. For those reasons, we rate this claim a “Mixture” of accurate and misleading information.