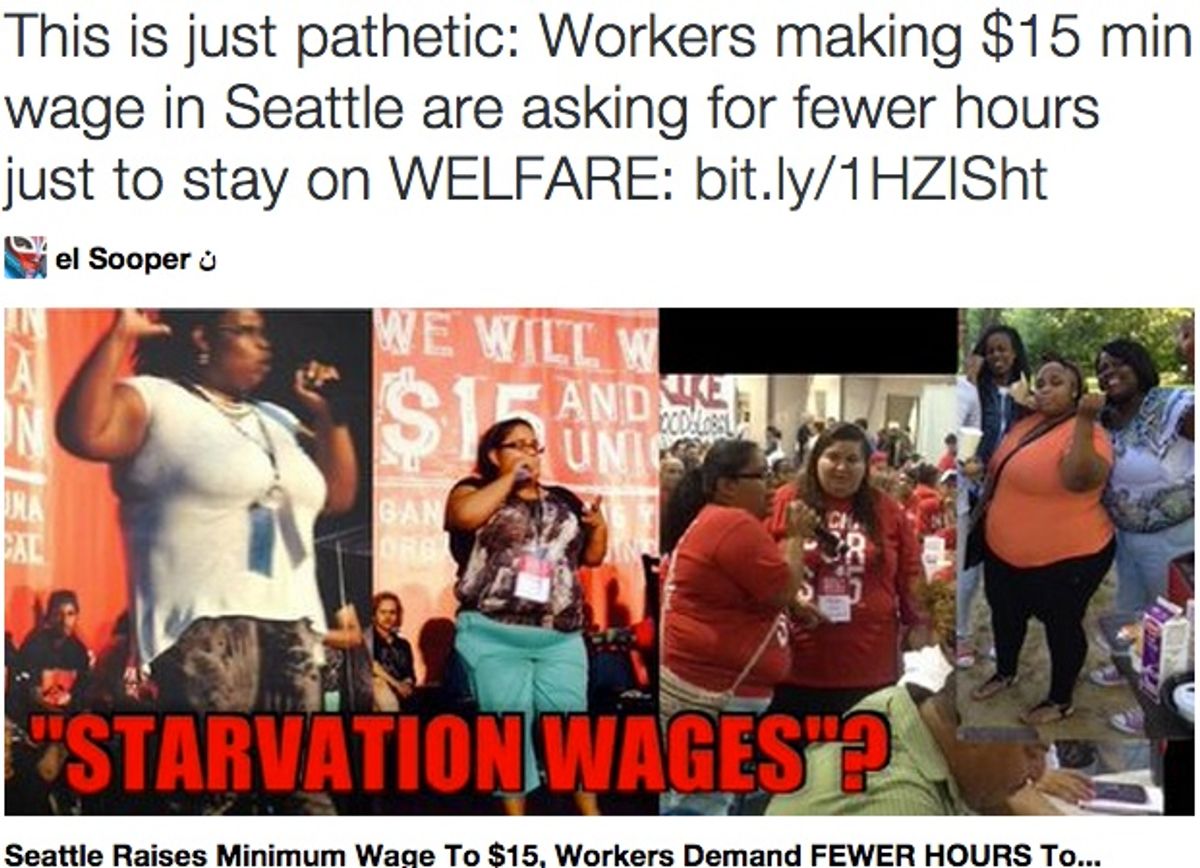 Claim:   Minimum wage workers in Seattle are asking for their hours to be cut so they can retain welfare benefits.

In Seattle, which now has a $15 minimum wage, workers are now demanding fewer hours to remain eligible for welfare. Obama's America.

Hey #Fightfor15 if workers just want to get out of poverty, why are they asking for fewer hours to stay on WELFARE? https://t.co/2MIvc3QQLf

This is just pathetic: Workers making $15 min wage in Seattle are asking for fewer hours just to stay on WELFARE: https://t.co/2MIvc3QQLf

Origins:  On 22 July 2015, Fox News published an article titled "Seattle Sees Fallout from $15 Minimum Wage, as Other Cities Follow Suit." Credited to correspondent Dan Springer (who also recently reported that Oregon was providing 15-year-olds with sex change surgeries), the article lamented what it claimed were "unintended consequences" resulting from a Seattle law raising the minimum wage there to $15 per hour.

The Fox News article and video reported that "evidence is surfacing" to suggest Seattle workers have begun to work less in order to claim a higher hourly wage while still qualifying for government assistance:

Evidence is surfacing that some workers are asking their bosses for fewer hours as their wages rise — in a bid to keep overall income down so they don't lose public subsidies for things like food, child care and rent.

"If they cut down their hours to stay on those subsidies because the $15 per hour minimum wage didn't actually help get them out of poverty, all you've done is put a burden on the business and given false hope to a lot of people," said Jason Rantz, host of the Jason Rantz show on 97.3 KIRO-FM.

Watch the latest video at video.foxnews.com

However, if Springer found "evidence" of such a trend, he did not include it in his 22 July 2015 article (claims from which have since been aggregated to multiple web sites). While Springer pointed to a Seattle home nursing nonprofit (Full Life Care), he only vaguely referenced a statement an unidentified individual there made to a third party, then quoted an opinion provided by a local radio host who speculated upon what might happen if workers opted to cut their hours based on a higher minimum wage in order to retain government assistance. Lacking from this narrative was any actual evidence that such claims were rooted in any measurable labor trend in Seattle.

It appears Springer's entire premise was lifted from an 8 June 2015 report by television station KIRO which provided additional context that painted the claim in a slightly different light:

Nora Gibson is the executive director of Full Life Care, a nonprofit that serves elderly people in various homes and nursing facilities. She is also on the board of the Seattle Housing Authority.

Gibson told KIRO she saw a sudden reaction from workers when Seattle's phased minimum-wage ordinance took effect in April, bringing minimum wage to $11 an hour. She said anecdotally, some people feared they would lose their subsidized units but still not be able to afford market-rate rents.

For example, she said last week, five employees at one of her organization’s 24-hour care facilities for Alzheimer's patients asked to reduce their hours in order to remain eligible for subsidies.

In that same article, Full Life Care's executive directly explicitly stated that the issue was not one of worker laziness or an intent by employees to "game the system" for additional "welfare benefits," but rather one of necessity due to Seattle's exceptionally high market rate for private housing:

"This has nothing to do with people's willingness to work, or how hard people work. It has to do with being caught in a very complex situation where they have to balance everything they can pull together to pull together a stable, successful life," Gibson said.

Gibson said she fully supports a minimum wage increase but was not surprised when her employees asked for fewer hours.

"The jump from subsidized housing to market rate in Seattle is huge," she said.

While two other Seattle residents spoke to KIRO about the specter of being shut out of subsidized housing by earning a slightly higher wage, a Seattle city council member told the outlet that the accounts did not reflect any measurable trend of which he was aware:

"We need more information, for one thing. This is anecdotal," Licata said.

Still, he said people need more options, especially after breaking the threshold that pushes them out of public housing.

"We do not want this to be an improvement on one side of the scale, and then decrease in living conditions on another," Licata said. "We should not be using this as an excuse not to address the overall problem."

What has been reported is that several full-time workers at a single Seattle non-profit may have expressed a desire to adjust their hours to retain subsidized housing, but more "evidence" of workers requesting fewer hours on the job after the minimum wage increase hasn't turned up yet. Moreover, the source originally quoted about the issue stated that workers earning the higher hourly rate would likely be unable to afford private housing in Seattle due to market conditions, but they were not seeking other "welfare" benefits nor unwilling to work.