"If you cheat [at golf], you will be the loser, because you are cheating yourself," the actor once wrote. 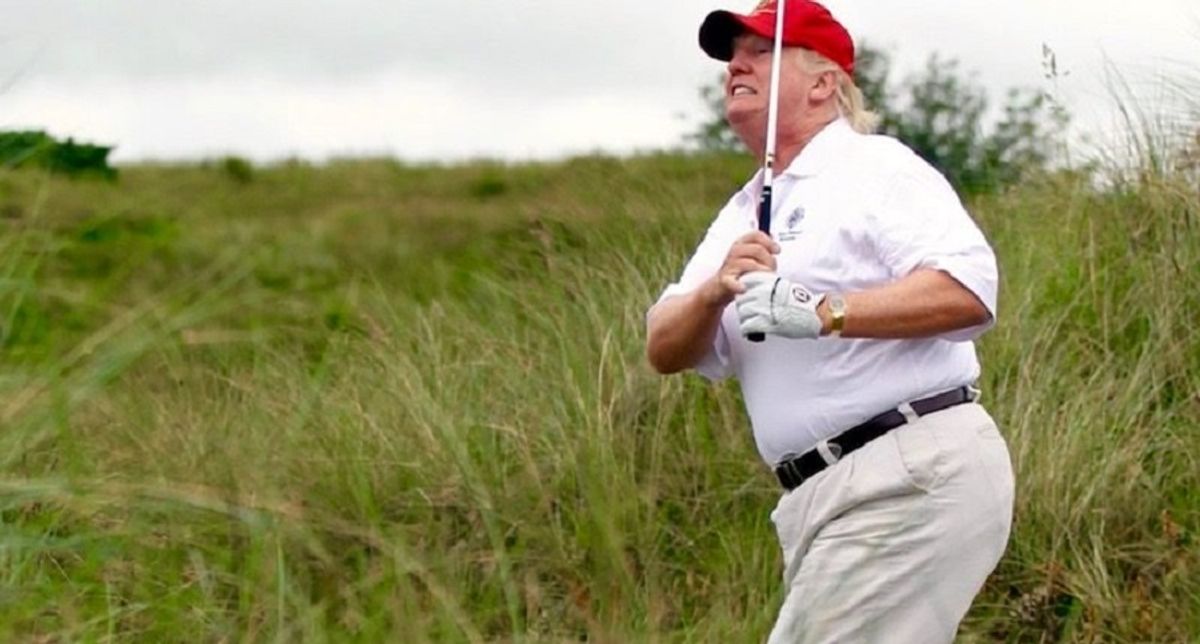 Previous Article
Next Article
Article 32 of 38 in Collection

On Nov. 1, 2020, a day after the passing of Scottish actor Sean Connery, U.S. President Donald Trump tweeted that Connery had been instrumental in helping him secure approval for a "big development in Scotland":

The legendary actor, 007 Sean Connery, has past on to even greener fairways. He was quite a guy, and a tough character. I was having a very hard time getting approvals for a big development in Scotland when Sean stepped in and shouted, “Let him build the damn thing”. That was all I needed, everything went swimmingly from there. He was so highly regarded & respected in Scotland and beyond that years of future turmoil was avoided. Sean was a great actor and an even greater man. Sincere condolences to his family!

Which development Trump was referring to was uncertain. He had previously made a similar claim about being aided by the Scottish-born Connery in his 2014 purchase of the hotel and golf courses at the Turnberry golf resort on the Firth of Clyde in Ayrshire, southwest Scotland. In 2018, for example, while visiting the UK Trump was reported as saying, "I met James Bond and I got all my approvals. James Bond was better than my approvals lawyer":

Donald Trump told Theresa May that Sir Sean Connery helped him win approval for his controversial golf course in Turnberry, according to reports.

As the two world leaders enjoyed a meal with their partners at Blenheim Palace they exchanged small talk.

According to the Sunday Times, the US President started to talk about his long battle with Scottish authorities to get planning permission for his Turnberry golf course in South Ayrshire, where he spent two nights of his three-night 'working visit' to the UK.

Trump is reported to have told May: "I met James Bond and I got all my approvals.

"James Bond was better than my approvals lawyer."

In 2010, however, while Trump was promoting the future opening of Trump International Golf Links in Balmedie, Aberdeenshire, Scotland, he stated that Connery had been instrumental in securing approval for that project:

Tycoon Donald Trump teed up the opening day for his new golf course in two years.

And he revealed his dream is to have movie star Sean Connery and European Ryder Cup captain Colin Montgomerie play the first round.

Trump was speaking as he declared himself the saviour of the sand dunes at his controversial development site at Menie Estate, Balmedie, near Aberdeen.

He said: "We have saved the dunes when they might have been blown away in the winds. From an environmental standpoint, it is a much better situation than before we bought the site.

"We're going to produce something for Aberdeen and Scotland that is going to be a masterpiece."

Trump said Connery and Monty had both backed his vision for the Dunes of Scotland course.

He added: "Sean was in New York recently and I was with him. He came out of the blue and endorsed this strongly.

"First of all, I loved him as James Bond, my all-time favourite James Bond. But when Sean Connery was strongly in favour of this course, that actually had a big impact."

The latter project, which was approved over the objections in local authorities in 2008, was certainly the more controversial of the two and required much more development work (since it did not involve the purchase of an existing facility):

As many Americans are trying to figure out what kind of president they have just elected, the people of Balmedie, a small village outside the once oil-rich city of Aberdeen, say they have a pretty good idea. In the 10 years since Mr. Trump first visited, vowing to build “the world’s greatest golf course” on an environmentally protected site featuring 4,000-year-old sand dunes, they have seen him lash out at anyone standing in his way. They say they watched him win public support for his golf course with grand promises, then watched him break them one by one.

A promised $1.25 billion investment has shrunk to what his opponents say is at most $50 million. Six thousand jobs have dwindled to 95. Two golf courses to one. An eight-story, 450-room luxury hotel never materialized, nor did 950 time-share apartments. Instead, an existing manor house was converted into a 16-room boutique hotel. Trump International Golf Links, which opened in 2012, lost $1.36 million last year, according to public accounts.

“If America wants to know what is coming, it should study what happened here. It’s predictive,” said Martin Ford, a local government representative. “I have just seen him do in America, on a grander scale, precisely what he did here. He suckered the people and he suckered the politicians until he got what he wanted, and then he went back on pretty much everything he promised.”

Which golf project Trump was making his claim about is unknown, as is just how and when Connery spoke up in a way that supposedly cleared the way for Trump to secure approval for it. The UK's Mirror newspaper stated in 2018 that "There is no evidence to support his claim," and Scotland's The National noted just after Connery's death that "There was no evidence to support Trump’s claim at the time, and although Connery was approached for comment, no response from the Scot was reported."

The Guardian reported, in reference to the Trump International Golf Links project, that the rumor was definitely untrue:

Martin Ford, the Aberdeenshire councillor who was chair of the planning committee that initially refused Trump’s application to build the resort, told the Guardian: “Mr Connery was not involved in the due process that led to the granting of planning permission for a golf resort at Menie. He did not submit a letter of representation to the council, appear at the planning hearing, or at the public local inquiry.”

Ford added: “Opinions offered in press articles are not material considerations in decisions on planning applications.”

David Milne, a near neighbour of the Trump golf course in Scotland, and the US president’s most vocal local critic, said the claim that Connery helped him land planning permission for his golf resort was “utter bollocks”.

Connery, at least, was indeed passionate about golf, although he did not take it up until later in life, as he wrote in his 2008 book "Being a Scot":

I never had a hankering to play golf, despite growing up in Scotland just down the road from Bruntsfield Links, which is one of the oldest golf courses in the world. It wasn't until I was taught enough golf to look as though I could outwit the accomplished golfer Gert Frobe in "Goldfinger" that I got the bug.

I began to take lessons on a course near the Pinewood film studios, and was immediately hooked on the game. Soon it would nearly take over my life.

I began to see golf as a metaphor for living, for in golf you are basically on your own, competing against yourself and always trying to do better. If you cheat, you will be the loser, because you are cheating yourself.

Previous Article
Next Article
Article 32 of 38 in Collection

Sources used are hyperlinked within this article.