No, Sean Connery's Net Worth Didn’t Leave Family ‘in Tears’ 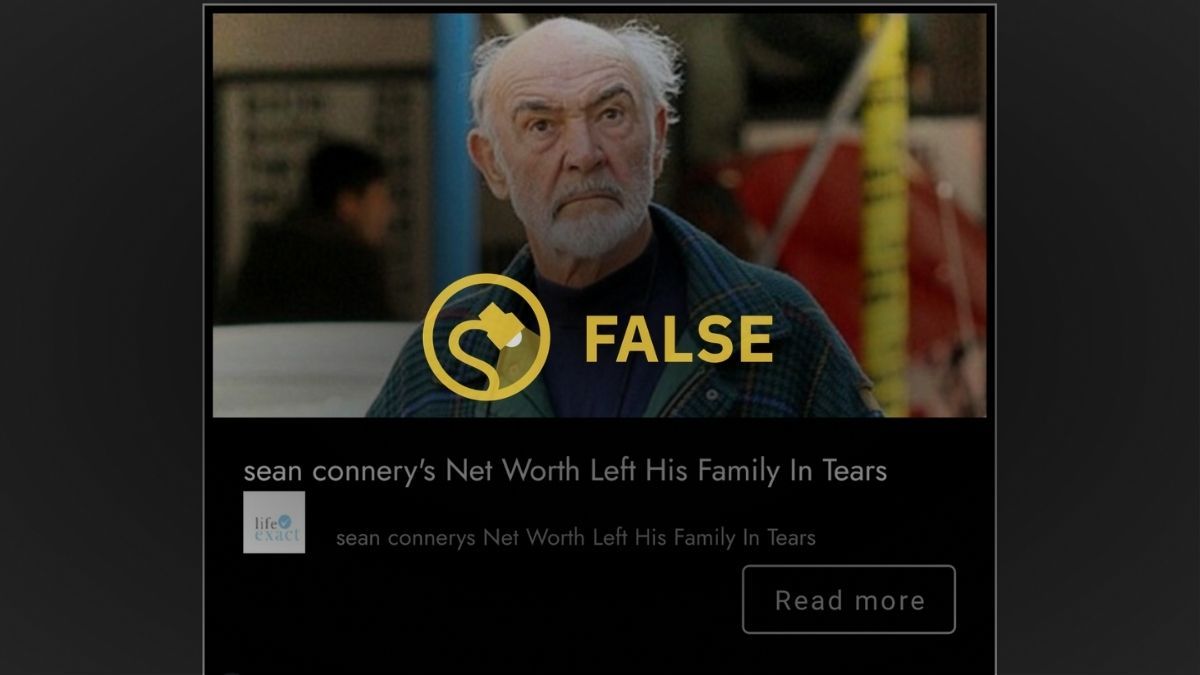 Known as a famous Hollywood actor and one of the original men to portray the iconic character James Bond, Sean Connery died on Oct. 31, 2020. According to TMZ, he died at 1:30 a.m. "at his home in the Bahamas."

Sean Connery died in his sleep from pneumonia, heart failure and old age ... according to his death certificate.

TMZ obtained Connery's death cert and it shows he died from respiratory failure as a result of pneumonia, old age and atrial fibrillation ... an irregular heart rate that can increase the risk of strokes, heart failure and other heart-related complications.

Entertainment Tonight made contact with the family, reporting that "Connery's wife, Micheline Roquebrune, and his two sons, Jason and Stephane, told ET that he died peacefully in his sleep, surrounded by family."

It's not true. It's fabricated and completely baseless. Sean Connery's family was not left "in tears" because of his net worth. We previously reported on the "net worth left his family in tears" advertising ploy with "Jeopardy" host Alex Trebek. The late Kenny Rogers also appeared to be a victim of the ploy. The advertisement in question appeared to lead to Life Exact, a viral content website. It was first documented by Reddit user JezCon. It's unclear if the advertisement is still active on the website. We were unable to locate the ad, but it likely lead to a slideshow with multiple pages, where the idea was to make more money on the advertisements displayed during the slideshow than it cost to run the original ad alongside Reddit content. This is known as advertising "arbitrage."

Business and technology blog Margins is managed by Ranjan Roy and Can Duruk, and Roy defined "arbitrage" as "leveraging an inefficient set of systems to make a riskless profit, usually by buying and selling the same asset." He also called it "the mythical free lunch that economics tells us does not exist."