Do Scorpions Glow Under UV Light?

As if we needed another reason to move to Alaska. 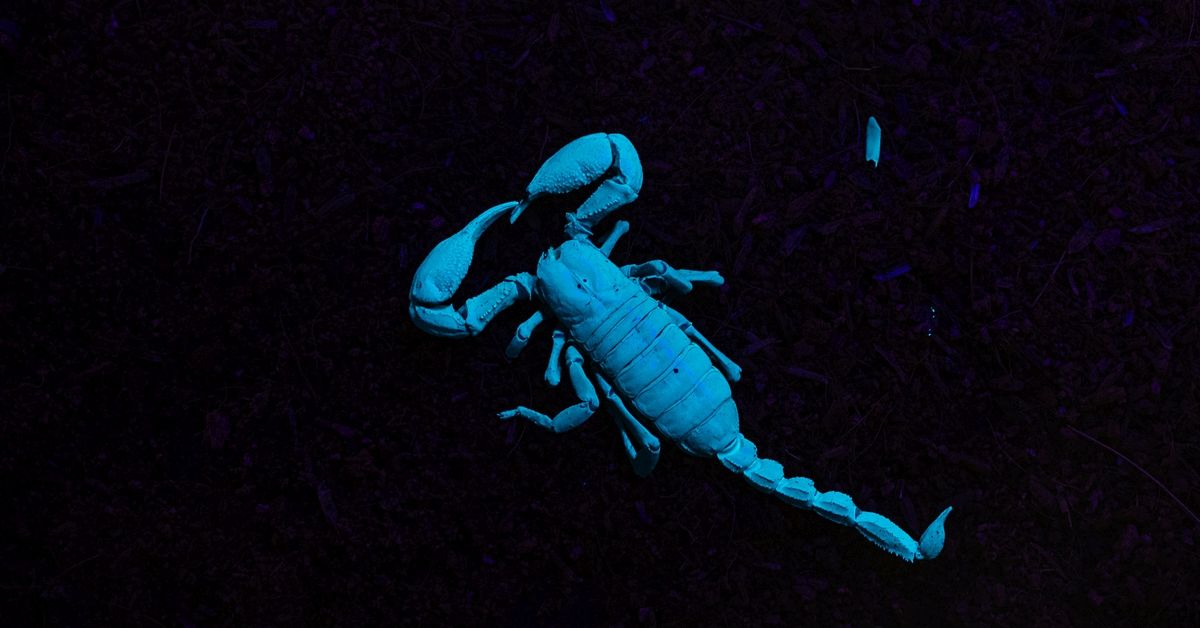 Scorpions are creepy and they’re kooky, mysterious and spooky, and come with an evolutionary ooky — that is, the ability to glow under UV (ultraviolet) light.

For decades, the reason why scorpions glow in the dark has stumped scientists. In fact, it was only in the 1960s that researchers first identified the illuminating ability. As The New York Times reported in 2017, we know that there are molecules in the layer of the cuticle, known as the exoskeleton, that absorb certain wavelengths of ultraviolet light and emit it in blue-green wavelengths that are visible at night and appear to glow.

For background, most of us know UV light as its most common form: sunshine. Certain wavelengths of UV light are visible to the human eye, and there are some species of insects, like bumblebees, that NASA notes can see other wavelengths that we can’t. (Some bug zappers glow at night to attract bugs, for example.)

Other species of insects also glow under UV light, including species of spiders, lightning bugs, and centipedes. But scorpions present a special enigma: Why?

Biologist Carl Klook has presented a number of theories. The glowing could be a “relic trait” that was once an evolutionary necessity that is no longer needed. It might also be some sort of sunscreen or a means of communication. The leading theory, however, is that a scorpion’s ability to fluoresce is likely a defense mechanism that helps the arachnid detect and avoid light.

In 2010, Klook and a team at the California State University in Bakersfield described a study in the Journal of Arachnology in which more than a dozen female scorpions were exposed to various types and combinations of light, including UV, infrared, and white light to see how active they would be under certain conditions. It was determined that scorpions exposed to more fluorescent light reduced their activity and tended to stay more stationary. This means that the fluorescence ability potentially aids in the detection of and response to UV light, and may potentially help them to hide from predators.

“Because night-time levels of UV light correlate with the Moon phase, this could enable the creatures to detect moonlight and remain obscured on moonlit nights,” according to a 2010 article published in Nature describing the study. They may have eight eyes, but it appears that scorpions “see” with their entire body.

In 2012, Douglas Gaffin from the University of Oklahoma expanded upon Klook’s work to determine how scorpions react to ultraviolet and blue-green light both when the arachnid’s eyes are blocked and unblocked. Scorpions whose eyes were blocked reacted to UV light in much the same way as those whose eyes were unblocked, which suggests that molecules in the exoskeleton may “function as a whole-body photon collector, transducing UV light to cyan-green before relaying this information the central nervous system.” In essence, scorpions “see” with their entire body and may use this ability to detect shelter. For example, if one is hiding under a rock, they won’t be able to “see” the UV rays with their body.

In 2020, scientists with the American Chemical Society set out to identify fluorescent molecules in addition to previously identified β-carboline and 7-hydroxy-4-methylcoumarin, which scientists knew existed in the hard outer shell, or exoskeleton. Writing in the peer reviewed Journal of Natural Products, the team extracted compounds from the molted exoskeletons of Liocheles australasiae (dwarf wood scorpion), purified that compound, and identified its structure phthalate ester. With antifungal and anti-parasitic properties, the presence of phthalate ester may also guard scorpions against parasitic infections in addition to its glowing properties.

Most scientists agree that the ability of scorpions to glow under ultraviolet light allows them to detect where UV light is, and isn’t, thus giving them the ability to determine when they are covered and hidden from potential predators.

And if you want to try it for yourself, simply shine a black light over a scorpion at nighttime.

“Why Do Scorpions Glow in the Dark (and Could Their Whole Bodies Be One Big Eye)?” Discover Magazine, https://www.discovermagazine.com/planet-earth/why-do-scorpions-glow-in-the-dark-and-could-their-whole-bodies-be-one-big-eye. Accessed 22 June 2022.