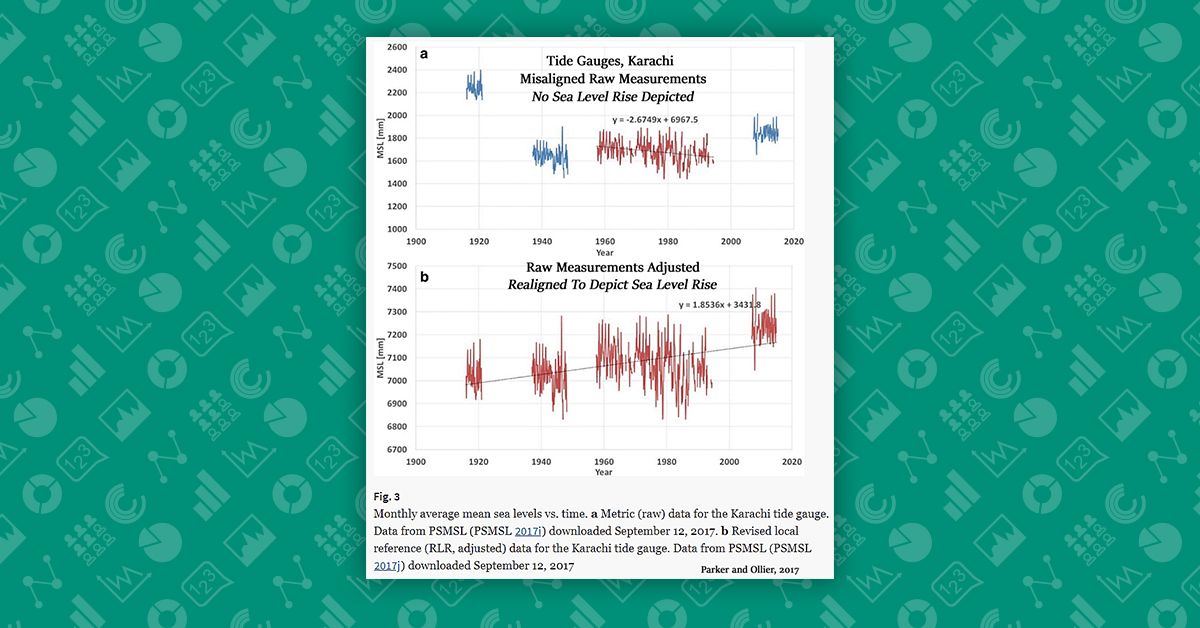 On 6 December 2017, Breitbart added to their highly shareable series of articles that falsely claim to have found proof climatologists manipulate data to exaggerate the threat of global warming. Taking a break from their usual misreading of global temperature records, Breitbart this time dipped their toes into sea level records.

The claim, like many others pushed by Breitbart author James Delingpole, was based on a research paper first highlighted by a post on a blog with a history of misrepresenting or manipulating data. The study itself was written by an ex-Fiat engineer with no formal training in sea level data publishing under an assumed name, someone who is infamous within the climate community for pushing a high volume of questionable studies in journals desperate for submissions.

The study, which did not appear to have been copy edited, asserted that scientists had been arbitrarily adjusting historical tide gauge data to inflate estimates of sea level rise. As evidence, the study focused on the routine corrections scientists applied to a single record in Aden, Yemen.

How Do Scientists Know Sea Levels are Rising?

Scientists around the world have arrived at the consensus that sea levels have risen by about 1.7 millimeters on average per year since the 1900s, and that the rate of sea level rise is accelerating. Researchers arrived at this conclusion mostly by using tide gauge records, some of which go back as far as the 1700s. These records, created by simple instruments in harbors around the world that measure the height of sea level relative to a fixed point on land, provide scientists with the longest record of changing sea level based on human-made measurements.

Marta Marcos, a sea-level researcher at the University of the Balearic Islands in Spain, told us by email that raw data from tide gauges comes with a number of natural challenges: Land sometimes rises or sinks for example, and the ocean’s currents and global mass distribution shift over time. Like many historical records, the data are subject to human or instrument errors and differ in quality, geographic coverage, and temporal range. Accounting for all these factors to get a global picture is the main focus of most contemporary sea-level research, Macros said.

Philip Woodworth, a former director of the Permanent Service for Mean Sea Level (PSMSL), told us that one of the main challenges for scientists working with tide gauge records is inconsistencies in documentation -- like if a station moves to a new location or a harbor changes its measurement methods. The PSMSL, which is part of Britain's Natural Environment Research Council, is one of the primary organizations that works to compile sea level data from tide gauge records.

Yet, all the methods scientist use to adjust the data generally agree on the same thing, according to the most recent Intergovernmental Panel on Climate Change (IPCC) assessment: that it is “very likely” that the sea level has been rising by about 1.7 mm per year globally from 1900-2010 -- a rate that is now accelerating.

The paper Breitbart promotes attempts to cast doubt on both PSMSL and their large dataset, which includes over 2,000 stations around the world. As proof, it uses the adjustments made to a single one of these records in Yemen.

In a paper (“Is the Sea Level Stable at Aden, Yemen?”) published in the second issue of a brand new journal Earth Systems and Environment, Albert Parker (an ex-Fiat engineer with no university affiliation), and Cliff Ollier (a retired geologist from the University of Western Australia and a member of an Australian climate skeptic organization) claim without evidence that the corrections applied to one of the oldest tide gauge records in the Indian Ocean — a record from Aden, Yemen — were “arbitrary” and manufactured to exaggerate sea level rise.

The authors’ main proof that this is the case? Their description of the raw data at Aden, Yemen (which doesn’t show dramatic rise in sea level) and that of the corrected data (which does show a rise in sea level) in a tone suggesting: “we caught you!” They then conclude that the adjustments to the Aden record were arbitrarily “composed to produce a high trend, high acceleration record.” (The data they describe are freely available on the PSMSL web site).

To prove their point, they created their own arbitrary correction to the raw data showing that it should actually show virtually no sea level rise. However, they provide no basis for their adjustments to the raw data -- they merely compare them to records from two other stations, without ever proving that these comparisons have merit.

Parker and Ollier dismiss this work by PSMSL saying it is incorrect and arbitrary.  However, they provide absolutely no information to support their allegations. Instead they make up their own adjustments to the sea level record so that the trend over the series is minimal.

Parker and Ollier also never address the scientific rationale documented by scientists working with the Aden dataset. Oftentimes, these adjustments were based on interpretations of documentation from the Aden port and are checked against nearby records theoretically likely to present similar tide histories. They have been further supported by modern instrumentation installed at Aden in the mid 2000s. Woodworth told us the most recent adjustments to the Aden record were based on his work, and came from a reassessment of the Aden data’s documentation:

It is not out of the question that, if new documentation becomes available or if there is new interpretation of the existing documentation, that sections of the record could be altered again.

There is nothing sinister about that, one always tries to provide records that are as reliable as possible, and there is no conspiracy to make them look as if sea level is rising.

Parker and Ollier could perhaps direct blame toward the PSMSL for not digitizing literally every bit of untranslated, raw Aden tide gauge data documentation. However, Parker and Ollier are categorically wrong when they suggest that scientists made these adjustments without rationale, as detailed in a formal response from PSMSL. Further, the two authors provide no credible evidence that their version of corrected data is superior to the PSMSL’s.

Who Is Albert Parker and Why is Breitbart Quoting Him?

Numerous scientists have alleged that Albert Parker is actually a former Fiat engineer named Alberto Boretti. Boretti, who listed an engineering Ph.D. on an archived faculty page, held a professorship at Australia’s now-defunct University of Ballarat and he appears to have started using the name Parker professionally sometime around 2012 when he took on a teaching role at Australia’s RMIT University. In a press release about his then-affiliation with their “Green Engines Research Facility,” RMIT described him as an “engine technology expert.”

According to Woodworth (who also echoed claims that Parker and Boretti are the same person), Parker is “a prolific author of unreadable papers,” which he publishes in journals desperate for submissions. This paper certainly fits that profile, as it was published in the second issue of Earth Systems and Environment. Not overloaded with submissions by any stretch, the journal accepted a second Parker and Ollier study in that same issue.

Under the name Albert Parker, he served as a reviewer for the sea level chapter of the IPCC’s most recent climate assessment report. His primary contribution as a reviewer was to suggest that eight Alberto Boretti papers and four Albert Parker papers should have been mentioned. The final draft of the IPCC chapter devotes a paragraph to these works, largely dismissing them as lacking merit. Church, who was the lead author of that chapter told us:

The hurdle for being an IPCC reviewer is set very low and yes [Parker] was a reviewer. We had to respond to his comments, which included that we had not previously referred to his long list of papers.  You can look up his comments and our responses on the IPCC web site – everything is [...] open for inspection.

Scientists have publicly criticized the scientific conclusions of his papers for being nonsensical and inaccurate. Responding to a 2013 Parker paper, oceanographer John Hunter described his analysis as “collection of the authors' personal views masquerading as a comment.”

We reached out to Parker to confirm his academic background. Outside of telling us he had a Ph.D. and master’s in engineering, Parker/Boretti ignored our multiple requests for clarification about where he got his degrees and what professorships he has held. His co-author, Ollier, also refused to tell us anything about Parker’s background outside of his being an engineer.

How, then, could so many red flags have been ignored by Breitbart’s James Delingpole? Because, as he explained in an October 2017 open letter, he does not read the papers he reports on and instead blindly trusts the analysis of a skeptic blog called the No Tricks Zone.

That blog searches for papers that sound like they challenge the consensus on global warming (whether or not they actually do). “Life’s too short” to spend any more time than he has to on his climate stories, he wrote.