Whether it’s feasible or not remains to be determined 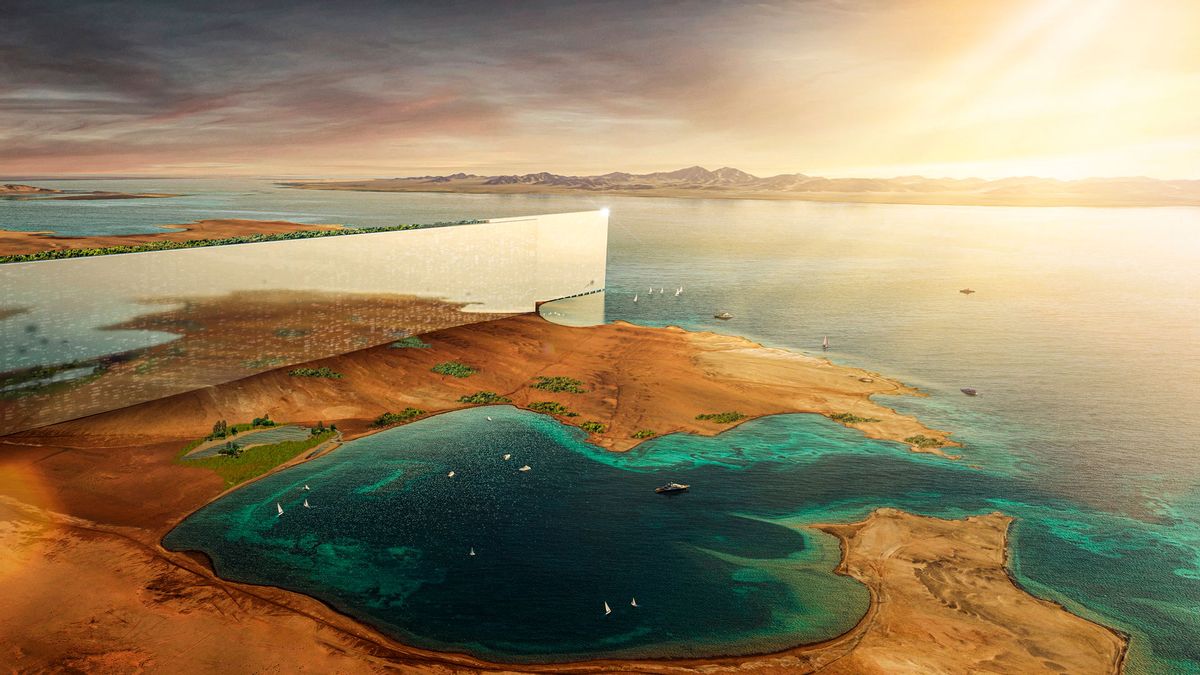 Whether the plans are feasible, or will come to fruition, remains to be seen.

For half a decade, Saudi Arabia's Crown Prince Mohammed bin Salman has touted the futuristic, utopian — and perhaps implausible — city of the future named Neom. Plans for the revolutionary metropolis once again made headlines in July 2022 when bin Salman released a proposal for the backbone of the city, known as “The Line.”

A video of the prospective city near the Gulf of Aqaba and its centric “infrastructure spine” were shared to Reddit and TikTok:

With an outer mirror facade, The Line is a skyscraper planned to one day house 9 million residents and is intended to blend in with nature, despite it being a tenth-of-a-mile wide and 105 miles long.

“The designs revealed today for the city's vertically layered communities will challenge the traditional flat, horizontal cities and create a model for nature preservation and enhanced human livability. THE LINE will tackle the challenges facing humanity in urban life today and will shine a light on alternative ways to live,” said bin Salmon.

With a high-speed rail offering end-to-end transit of 20 minutes, the concept for The Line is based on vertical layering – that is, layering amenities like parks, pedestrian areas, and homes across different levels. All amenities will be accessible within a five-minute walk, say planners.

The newly released plans were covered by a number of reputable news publications, including The Guardian, The Washington Post, and Bloomberg. While it’s true that the plans have been released, it’s not yet clear whether they are feasible. As they say, if something is too good to be true, chances are that it may be.

The prince first announced plans for Neom in 2017 as part of his Vision 2030 reform plan. In July, planners of Neom published a news release that offered more details about the enigmatic “civilization revolution,” releasing with it some of the finer city details.

Speaking to Reuters, bin Salmon said the $500 billion flagship project will be partially financed through a public offering and private sector investment in 2024. City design will be completely digitized and includes intentions of being 100% renewable.

Whether or not it will happen remains to be seen. As the tech news website Verge wrote, promotional footage of the city is “the result of some very excitable marketing execs and a fortnight of all-nighters in Blender.”

As the Neom website notes, the urban metropolis is touted as a home “for people who dream big.”

Bloomberg - Are You a Robot? https://www.bloomberg.com/tosv2.html?vid=&uuid=379bd9bc-0ed9-11ed-b498-7a416d715753&url=L25ld3MvYXJ0aWNsZXMvMjAyMi0wNy0yNS9tYnMtbWFwcy10d2luLTEwMC1raWxvbWV0ZXItYnVpbGRpbmdzLXRvLWhvdXNlLTktbWlsbGlvbi1wZW9wbGU=. Accessed 29 July 2022.