Did Sarah Huckabee Sanders Wear a KKK Halloween Costume in 1993? 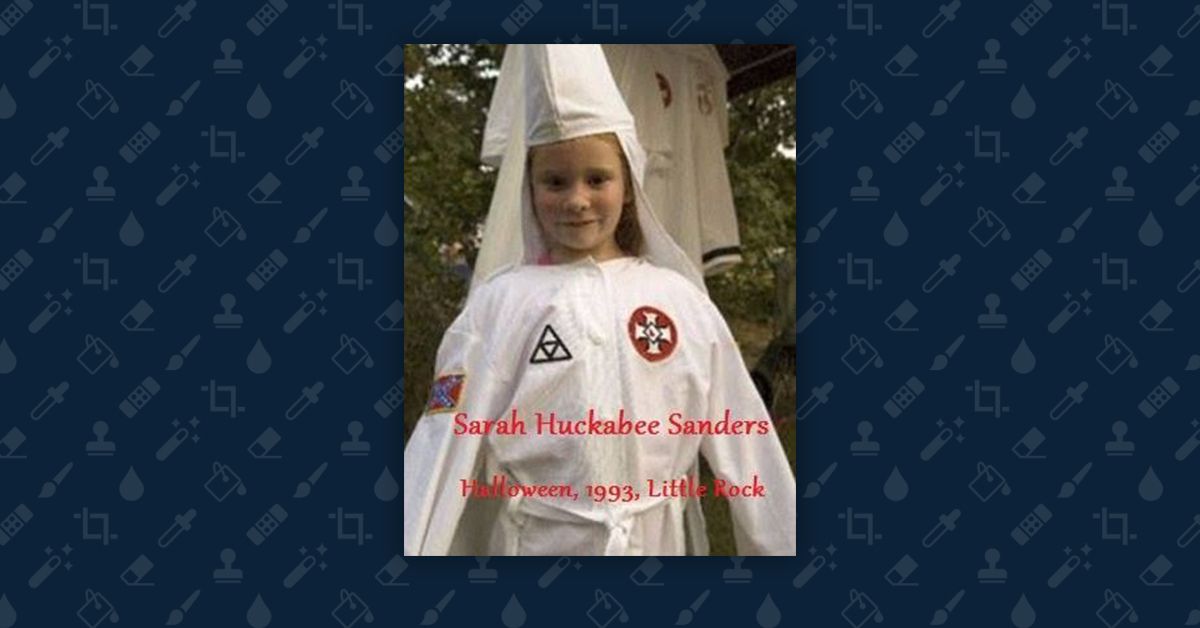 An image purportedly showing White House press secretary Sarah Huckabee Sanders dressed in a Ku Klux Klan costume for Halloween in 1993 was circulated on social media in October 2017 after it was posted to the Wake Up America Facebook page: Not only is Sarah Huckabee Sanders not the girl in the photograph, the image has nothing to do with Halloween, is not from 1993, and was not taken in Little Rock, Arkansas.

Photojournalist Anthony Karen took the photograph in 2007. "Ms. Ruth," a woman who sews hoods and robes for Klan members in Mississippi, made the KKK robe that the pictured girl wore in the photograph. Karen interviewed Miss Ruth for a photo-essay published in Mother Jones in 2008:

Coming from five generations of Ku Klux Klan members, 58-year-old “Ms. Ruth” sews hoods and robes for Klan members seven days a week, blessing each one when it’s done. A red satin outfit for an Exalted Cyclops, the head of a local chapter, costs about $140. She uses the earnings to help care for her 40-year-old quadriplegic daughter, “Lilbit,” who was injured in a car accident 10 years ago.

Although this image is not currently available on Karen's web site, the same child (along with the hanging robes behind her) can be seen in at least two of his other photographs. Karen also sent us a copy of the original photograph and confirmed via email that the image was part of the same set of photographs taken in September 2007: Here is the original caption and photo (this one was taken at the same time as the one you sent, I just can't access all my files at the moment).

"September 1, 2007. Arkansas. An honorary L.O.T.I.E (Ladies Of The Invisible Empire) dons her robe during a Ku Klux Klan Labor Day gathering. Klan realms from five different states came together for a three-day weekend of racial unity. The event included a cookouts, games and a Klan naturalization ritual. A historical cannon was fired every hour on the hour during daylight hours until local neighbors complained. Saturday evening closed with a cross lighting ceremony which, according to Klan beliefs, dispels darkness and ignorance. Due to a statewide burn ban, the lighting ceremony was carried out with Christmas tree lights. Credit - Anthony Karen"

No, it is not Sarah Huckabee Sanders and that child was, in fact, a member of the Ku Klux Klan at the time.

Sarah Huckabee Sanders was approximately 25 years old when these photographs were taken in 2007.

The Facebook page that circulated this image in October 2017 likely knew that this image didn't actually show the White House press secretary, as it was accompanied by a quote stating: "The problem is not whether this photo is real or not - it's that no one would be surprised in the slightest if it IS real."

We'd argue that the actual problem is that fake photographs are being shared with false claims in order to amplify the echo chamber and reinforce preconceived (and often erroneous or inflammatory) beliefs.