A popular meme detailing the actual delegate count between Bernie Sanders and Hillary Clinton in May 2016 is mostly accurate. 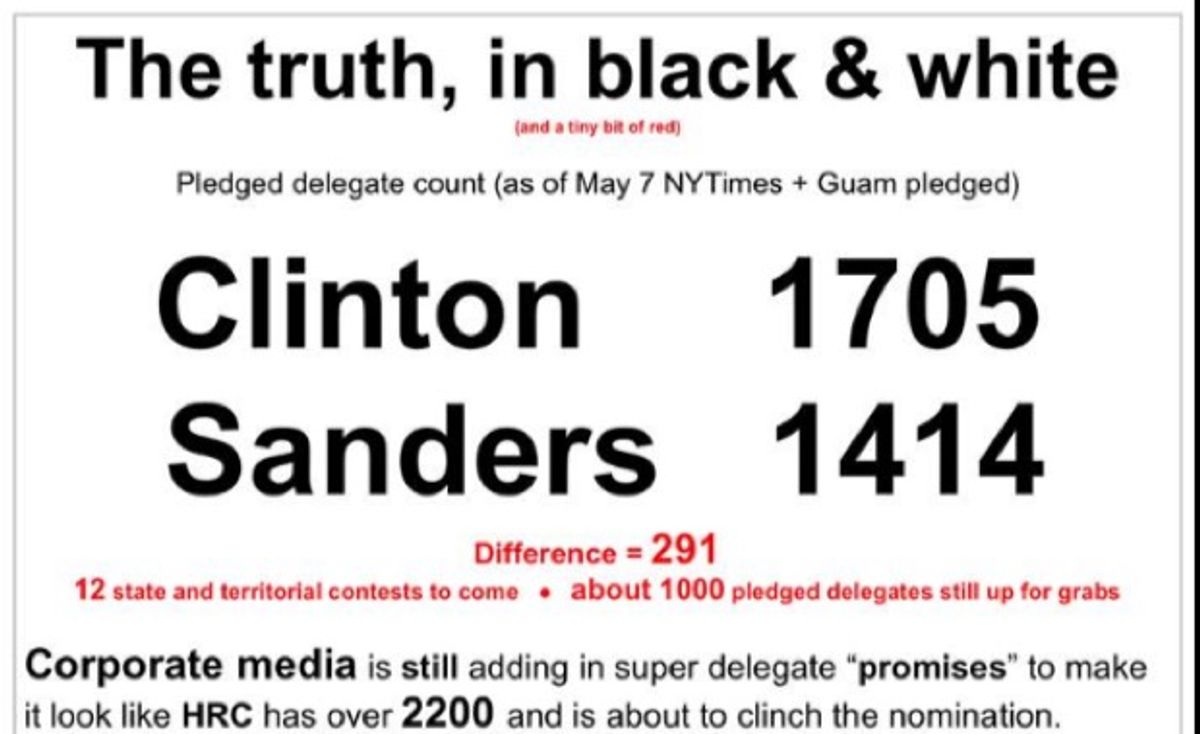 Claim:
Bernie Sanders trailed Hillary Clinton by only 271 delegates in May 2016, despite media inclusion of superdelegates in their respective totals.
Rating:

Bernie Sanders trailed Hillary Clinton by just 290 delegates in the Democratic presidential nomination race on 10 May 2016 if superdelegates were not counted.

Superdelegates are free to vote for any candidate, but most of them have already indicated support for a particular candidate.

On 6 May 2016, a Facebook user published the above-reproduced graphic to the Facebook group "Bernie Sanders for President 2016," saying in essence that Bernie Sanders trailed Hillary Clinton by just 291 pledged delegates, even though news reports typically included counts of unpledged superdelegates (who won't officially back candidates until the July 2016 Democratic National Convention) in the candidates' respective totals (and thereby made Hillary Clinton's delegate lead seem much larger):

The truth, in black & white (and a tiny bit of red)

Pledged delegate count (as of May 7 NYTimes + Guam pledged)

Corporate media is still adding in superdelegate "promises" to make it look like HRC has over 2200 and is about to clinch the nomination.

At this rate, neither HRC nor Bernie will get to the required 2383 pledged delegates needed to lock up the nomination before the convention.

This race will be decided at the convention.

Finding a current delegate count during primary season is a simple matter. Entering permutations of "Democrat delegate count" into an online search engine typically lead to an up-to-date image and numbers pinned to the top of search results: Hillary Clinton had earned 1,705 pledged delegates through primaries and caucuses as of 10 May 2016, while Bernie Sanders had earned 1,415. The chart shown here listed superdelegate counts separately from pledged delegate counts, but a bar chart at the top of the chart combined the two to suggest that Clinton held a 774 delegate lead and needed just 155 more delegates to lock up first ballot nomination.

Unlike pledged delegates, superdelegates (who are drawn from the ranks of Democratic National Committee members, distinguished party leaders, members of the United States House of Representatives and Senate, and state governors) can vote for any candidate from the first ballot onwards, but since they don't express anything more official than a preference until they cast votes at the Democratic National Convention in July 2016, some media outlets have criticized the inclusion of superdelegates in running totals. The Huffington Post, for example, noted that superdelegates can shift their original preferences in favor of stronger candidates right up until convention time, and Barack Obama trailed in superdelegate counts at one point in the 2008 presidential campaign until he secured additional primary victories that drove more superdelegates into his column:

Including super delegates at this point is not only misleading, but downright dishonest because super delegates won’t vote until the Democratic National Convention. As they did for Obama in 2008, super delegates can and will transfer their support to Sanders if the Senator continues to win in primaries and caucuses. To portray Clinton as the clear favorite this early on is a clear fallacy.

Nonetheless, superdelegate counts are not completely meaningless in judging a candidate's likelihood of securing the nomination, as most superdelegates have endorsed or expressed a clear preference for a particular candidate well ahead of the convention. An Associated Press report from February 2016, for example, suggested that Bernie Sanders' win in New Hampshire and other states had essentially been nullified by superdelegates:

So much for Bernie Sanders' big win in New Hampshire.

Since then, Hillary Clinton has picked up endorsements from 87 more superdelegates to the Democratic National Convention, dwarfing Sanders' gain from the New Hampshire primary, according to a new Associated Press survey. Sanders has added just 11 superdelegate endorsements.

If these party insiders continue to back Clinton overwhelmingly — and they can change their minds — Sanders would have to win the remaining primaries by a landslide just to catch up. He would have to roll up big margins because every Democratic contest awards delegates in proportion to the vote, so even the loser can get some.

However, the issue of superdelegate counts remains a relatively new and confusing one, because as NPR noted back in 2008, no Democratic race had yet been close enough for superdelegates to matter:

[Superdelegates] don't [significantly affect the nomination process] — usually. That's because in the past, the battle for the Democratic nomination had been settled fairly early. Michael Dukakis (in 1988) and Bill Clinton (four years later) established themselves as the clear front-runners fairly early in the process. It was even more one-sided in 2000, when Democrats nominated Al Gore, and in 2004, when John Kerry got the nod. The superdelegates really didn't have much of a role to play. But this time it's different. Neither Obama nor Clinton is running away with the nomination. And that puts the supers in a position they have never been in before.

The New York Times reported that as of 10 May 2016, 1,102 delegates (pledged and unpledged) remained up for grabs in states which had yet to cast their primary or caucus ballots, so the Democratic race is still certainly far from decided (even if Hillary Clinton remains the likely victor). By 24 May 2016, that number dropped to a difference of 271 delegates between Sanders and Clinton: Mathematically, the meme shown above is correct. It's also true that superdelegates are not pledged, don't cast votes until the national convention is held, and can vote for any delegate on any ballot (regardless of previously expressed preferences). However, superdelegates do typically endorse and express preferences for particular candidates well in advance of the convention, so even though some of them may switch sides before actually voting at the convention, the inclusion of them in candidates' running delegate totals is not meaningless or disingenuous — although it may ultimately prove inaccurate.

Abramson, Seth.   "The National Media Has Been Instructed By the DNC Not to Count Superdelegates, So Why Have They Refused?" Huffington Post.   2 March 2016.

Borchers, Callum.   "We Need More Questions Like This One From Jake Tapper To Debbie Wasserman Schultz [Video]." Washington Post.   12 February 2016.