A menu from a Bernie Sanders charter flight is real, but the selections are standard fare for Delta charters and not an example of hypocritical excess. 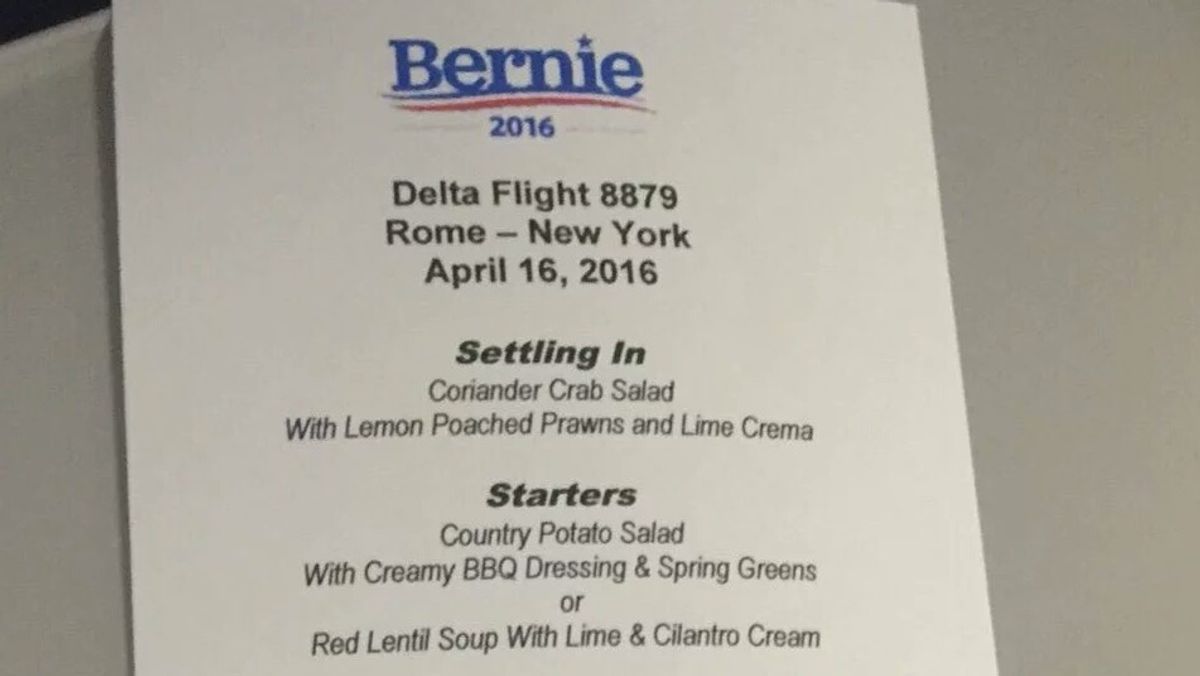 Claim:
Bernie Sanders flew on a private jet and served a lavish menu when traveling to Rome in April 2016.
Rating:

A widely-circulated photograph of a menu from a flight chartered by the Bernie Sanders campaign was authentic and unaltered.

The menu was not any different from Delta's commercial and charter flight offerings for Spring 2016; Sanders didn't fly on a private jet; photos of the purported private jet did not depict part of the Delta fleet; Sanders selected from available charter menu offerings and didn't demand lobster or "corn-fed chicken"; Delta (not charter customers) is responsible for available menu choices on chartered flights.

On 23 April 2016, the web site US Chronicle reported that a menu from a private Bernie Sanders flight to Rome revealed hypocritically luxurious fare on a presumably swanky voyage:

One thing that Socialist Bernie Sanders will tell you, ad nauseum, is that the rich have too much. They live like kings, and don’t spread that wealth to the masses of people who work for them. He will point to fast food workers, who put lettuce and pickles on burgers all day, and say that it’s not right that a person has to work forty hours per week still can’t make ends meet.

A menu has been obtained by New York Times best selling author, Conservative commentator, and former Secret Service Agent Dan Bongino, in which only the humblest of food choices were offered to ‘average Joe’ candidate, Bernie Sanders.

The photograph attached to the article had been shared on social media several hours earlier by New York Times writer Yamiche Alcindor, who had been reporting on Sanders' brief visit to Rome for the paper. Her original tweet depicted both sides of the chartered (not private) flight:

.@BernieSanders is about to take off for NY. We've been served a menu for the 9 hour chartered flight he's taking pic.twitter.com/1nR15R3aQQ

Examples of menus from 2012 and 2015 were similar on Delta charters and commercial flights: Delta's charter flight program is used by large groups traveling together as a more economical alternative to multiple separate ticket purchases. Companies and organizations that arrange charter flights not only receive customized, branded menus, but also are presented with a catalog of options that come standard with each flight chartered. Among those choices are several catering options.

The items seen in the above photographs are offered by Delta as part of their in-flight menu, not requested by Sanders or his staff specifically. The selections are closely in line with menu offerings reported by travelers flying both commercially and on chartered flights operated by Delta.

The US Chronicle article also included an image of an opulent private plane interior that was unrelated to the Sanders flight.