Is SF Changing the Name of a School Because Lincoln Didn't Show 'Black Lives Matter'?

A story that rocketed around the internet for its clickbait value employed misleading framing of an issue in San Francisco. 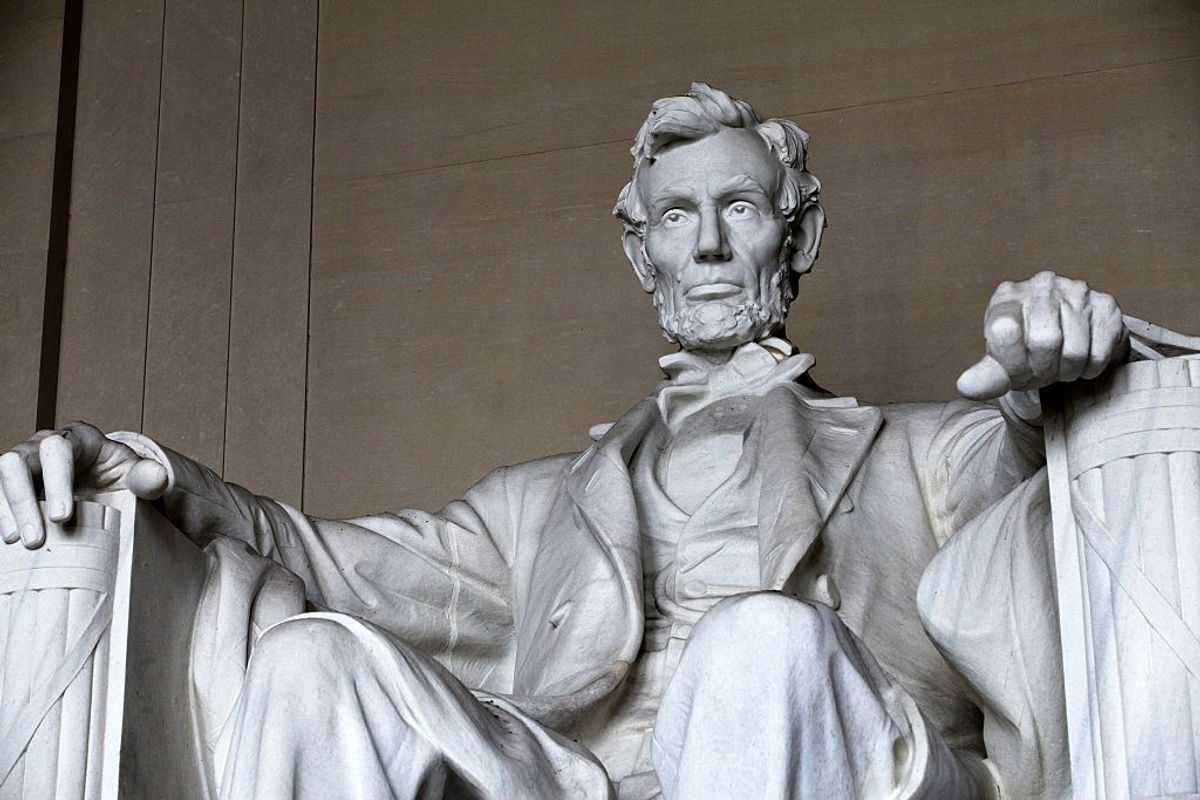 WASHINGTON - APRIL 10: Abraham Lincoln statue sits inside the rotunda of the Lincoln Memorial on April 10, 2015 in Washington, D.C. (Photo By Raymond Boyd/Getty Images)

On Dec. 15, 2020, various conservative news outlets published stories reporting that public schools in San Francisco were set on changing the name of Abraham Lincoln High School in the city's Sunset District because Lincoln "didn't show Black lives mattered to him."

Since massive Black Lives Matter demonstrations over the spring and summer of 2020 following high-profile police killings of Black Americans, the modern-era civil rights movement has been the subject of national media coverage and discussion. U.S. President Donald Trump, who has been accused of racism during his tenure in office, called it a "symbol of hate" when the phrase "Black Lives Matter" was set to be painted on New York City's famed Fifth Avenue, even as numerous businesses, politicians, and celebrities professed support for the movement.

So stories about the proposed high school name change may be a bit of red meat thrown to the nation's culture warriors, but predictably, the story is more nuanced. For starters, it's misleading to frame the most sensational aspect of the story as the most important, because in reality, the proposal to rename Lincoln High School had nothing to do with Black Lives Matter.

The source for the numerous headlines reporting that the liberal Bay Area city was set on changing the name of Lincoln High because Lincoln didn't show "Black lives matter" comes from a single quote from Jeremiah Jeffries, the chair of San Francisco Unified School District's School Names Advisory Committee. He was quoted by the San Francisco Chronicle in a Dec. 14, 2020, article on the subject with the following remark:

"Lincoln, like the presidents before him and most after, did not show through policy or rhetoric that Black lives ever mattered to them outside of human capital and as casualties of wealth building."

"The discussion for Lincoln centered around his treatment of First Nation peoples, because that was offered first," Jeffries stated.

A spreadsheet compiled by the committee on schools recommended for name changes made no mention of "Black lives matter." The entry for Lincoln instead exclusively pertained to the plight of Native Americans under Lincoln's presidency, which included the continued, forced removal from ancestral lands and the mass execution of dozens of Dakota Sioux men in 1862.

It's important to note that just because the advisory committee placed certain school names on the list for potential change doesn't mean the change will happen. It has to be reviewed and voted on by the city's school board, a process expected to take place in early 2021.

It's also important to note that even though the story has been presented in national news outlets as an example of liberal cancel culture gone wild — one story got retweeted by Trump — the name-change proposals have been controversial within the city itself.

San Francisco's Democratic mayor, London Breed, issued a statement in October 2020 blasting the process as a poor use of public resources amid an ongoing pandemic and resulting school closures, saying it was "offensive" to consider while parents and children struggle with distance learning. Breed's statement read, in part:

Look, I believe in equity. It’s at the forefront of my administration and we’ve made historic investments to address the systemic racism confronting our city. But the fact that our kids aren’t in school is what’s driving inequity in our City. Not the name of a school. We are in a pandemic right now that is forcing us all to prioritize what truly matters. Conversations around school names can be had once the critical work of educating our young people in person is underway. Once that is happening, then we can talk about everything else. Until those doors are open, the School Board and the District should be focused on getting our kids back in the classroom.

The year 2020 has been punctuated by discussions of how racism and injustice played a formative role in U.S. history, many times cropping up in the form of protests over symbols and statues of historical figures like Confederate soldiers and Christopher Columbus.

Lincoln's role in ending slavery and unifying the country after the Civil War has made him one of the most recognizable and revered historical figures in American history. The Lincoln Memorial in the nation's capital is one of the most iconic American landmarks, and former President Barack Obama, the nation's first Black president, in 2008 honored Lincoln with a train ride echoing Lincoln's journey to his inauguration.

But Lincoln's legacy for many indigenous peoples is more complicated, because of the ongoing brutality of U.S. government policies toward the nation's indigenous communities. The mass execution of the 38 Dakota Sioux men, who were part of an uprising in 1862 brought on by treaty violations, hunger, and poverty in Minnesota, remains a source of trauma to which Lincoln's legacy is attached.

On April 6, 2021, citing "huge tension" generated by the name changing controversy, the San Francisco school board was set to vote on a resolution that would officially suspend the effort for the time being.

Updated to note that the school board was set to vote on a resolution that would suspend the name change effort over the controversy it generated.