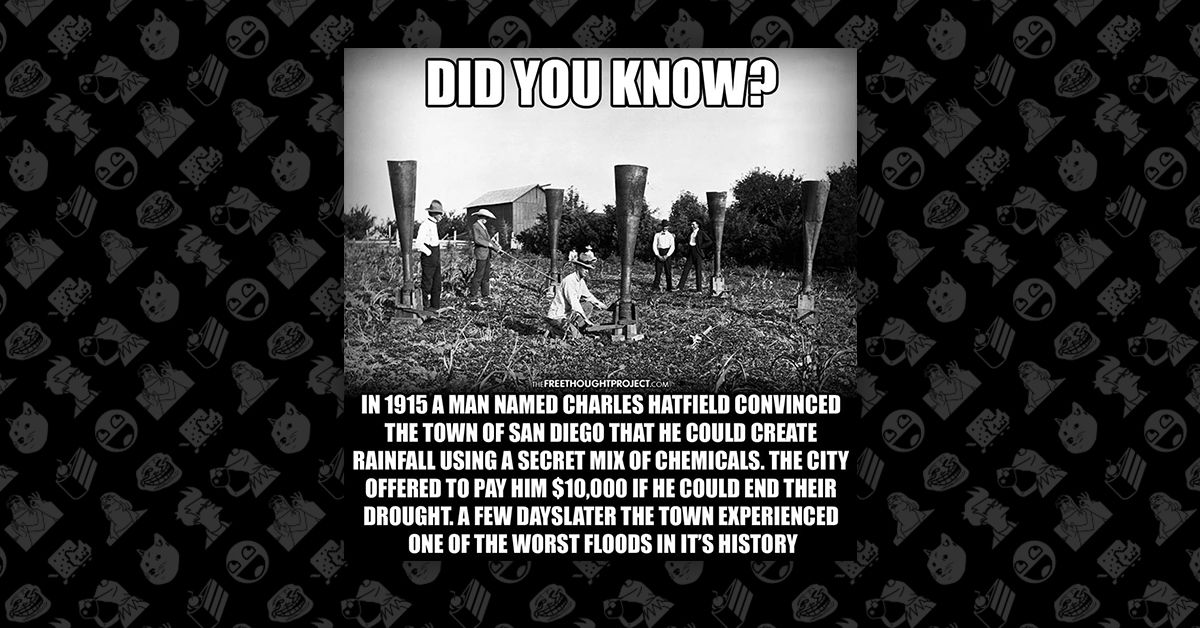 Claim:
In December 1915, San Diego agreed to pay $10,000 to "rainmaker" Charles Hatfield to bring an end to the region's drought; over the next few weeks the city was inundated by rain and suffered one of the worst floods in its history.
Rating:

"The bigger the humbug, the better the people will like it," P.T. Barnum once said.

One of the best examples of that might be the life and career of Charles Hatfield, professional rainmaker, who is remembered as the man who summoned rain from the heavens to save San Diego from the drought it had suffered throughout most of 1915, only to be blamed afterward for one of the worst floods in the city's history.

Even now, his saga is recounted in Internet memes that don't always get the facts straight and are often accompanied by images unrelated to Hatfield's own endeavors (see the featured image above, which depicts an altogether different rainmaker at work), while still conveying the bitter irony of his single greatest claim to fame.

Hatfield, who preferred the title "moisture accelerator" to "rainmaker," set about rescuing San Diego by climbing the two 35-foot towers he had built outside the city limits and igniting a secret slurry of chemicals he claimed would extract moisture from the atmosphere and convert it to rain.

The setup was similar to one he had used 11 years before in Los Angeles:

The verbal agreement he struck with the San Diego City Council in mid-December 1915 called for Hatfield to produce enough rainfall to fill the 15 billion-gallon Morena Reservoir within one year for a fee of $10,000 (equivalent to more than $200,000 today), on a "no rain, no pay" basis. No one had seen the reservoir completely full since it was built in 1897. The city figured it had nothing to lose.

On or around 1 January 1916, puffs of smoke or vapor reportedly wafted skyward from the towers as Hatfield put his so-called "rain precipitation and attraction plant" into operation (at least one witness also reported hearing muffled explosions, although this detail has been disputed). Hints of precipitation, in the form of a light drizzle, were noted almost immediately.

On 5 January it actually rained at Morena Reservoir, though not heavily enough to make a serious dent in the water level. But on 10 January, rain "of a genuinely remarkable quan­tity" started to fall, according to the San Diego History Center:

For 24 hours in San Diego itself it rained off and on, but reports from the back country said it rained hard and almost continuously. From then until the 18th it was rainy weather. On the 14th it rained torrents and continued to rain heavily for several days. Roofs leaked. Storm drains that had not been taxed for years overflowed.

On 17 January, the San Diego River overflowed its banks and flooded the Mission Valley. The Associated Press reported:

Three days of steady rain has transformed the San Diego and Tijuana Rivers into raging torrents, the rapidly rising waters compelling hundreds of persons in the lowlands to abandon their homes.

The Mission Valley, through which the San Diego River courses, is inundated for miles, while the flood waters of the Tijuana River threatened the new race track of the Lower California Jockey Club and submerged many homes at San Ysidro, a few miles south of this city.

Charles Hatfield telephoned to the City Hall today that in ten days he will have the Moreno [sic] reservoir full and will come to sign up his contract. He has a verbal contract with the City Council now for $10,000 if he causes the reservoir to be filled.

He would brook no skepticism about his having caused the precipitation. "I understand the newspapers are saying I didn’t make the rain," he told the San Diego Union. "All I have to say is that Morena has had 17½ inches of rain in the last five days and that beats any similar record for the place that I have been able to find."

The rains subsided for a few days then picked up again on 26 January as new storm fronts settled in over Southern California. The fresh downpour was so heavy it caused the Otay Dam southeast of San Diego to collapse on the 27th, flooding the Otay Valley and killing a reported 50 people (an estimate later revised downward to about 20). "No survivors and no corpses were discovered as the torrents had swept everything clean," the San Bernardino News reported two days later.

The catastrophe (which locals took to calling the "Hatfield Flood") has been described by the National Weather Service as "the most destructive and deadly weather event in San Diego County history," with damages approaching $8 million in 1916 dollars (the equivalent of almost $200 million today).

Despite rumors that lynch mobs were looking for him, Hatfield set out from his Morena Reservoir campsite to San Diego City Hall to demand payment for his services. "The essence of my contract was to fill Morena Reservoir. That has been done," he said in an appearance before the City Council on 17 February. "I have fulfilled my contract and I desire that the city should fulfill its contract to pay me $10,000."

Perhaps fearing the legal repercussions of acknowledging it played a role in bringing on the devastating storms, the city reneged, arguing that Hatfield did not have an enforceable contract with San Diego. He filed suit and indicated his willingness to accept a settlement, which prompted an offer from the city attorney to pay Hatfield the full amount of $10,000 if Hatfield would assume full legal responsibility for the flood and all the damage it caused. He turned it down. After many years in legal limbo, the lawsuit was eventually dismissed.

Far from harming his reputation, the San Diego flood only increased the demand for Hatfield's services. His rainmaking career would ultimately span almost 30 years, from 1902, when he first began devoting time off from his job selling sewing machines to the study of meteorology, into the early years of the Great Depression. But San Diego would always be his biggest claim to fame.

Was Hatfield (and, by association, the San Diego City Council) really responsible for the massive January 1916 rainfall that almost destroyed San Diego?

As far as the courts were concerned, the answer was no. A judge ruled in damage lawsuits filed against the city that the flooding was "an act of God."

Professional meteorologists didn't buy Hatfield's claim that he successfully manipulated the weather, either. Notices in the Bulletin of the American Meteorological Society regularly dismissed his efforts as "pseudo-scientific trickery." Skeptics pointed out that the storm systems responsible for the flooding in San Diego County were actually quite vast, wreaking devastation throughout Southern California. A U.S. Geological Survey (USGS) report gives a sense of the scale:

The rains that swept southern California in mid-January 1916, converted the streams into torrents that overran their banks and devastated wide areas of the most fertile land of the State. The rains were heaviest and the floods most disastrous in San Diego County, but they were also very heavy in parts of Riverside, San Bernardino, Los Angeles, and Ventura counties, and they wrought widespread ruin throughout the region that extends southward from Santa Clara River to the Mexican boundary, and westward from the north-south ranges of San Bernadino and San Diego counties to the ocean.

Could Hatfield have accomplished all that by sending up fumes from his campsite at the edge of Morena Reservoir in San Diego? And it wasn't just a question of scale. The timing of Hatfield's endeavor was a bit suspect, as well. The month of January is smack in the middle of San Diego's normal rainy season. If you're betting on rain, bet on January. Even better, Hatfield's proposal gave him a full year to accumulate enough rainfall to fill the reservoir. It seems unlikely that the choices he made that so greatly favored the odds of success were accidental.

Despite insisting throughout his life that his methods were valid and scientific, the closest Hatfield ever came to explaining them was when he plied the press with self-promoting double-talk. "There is no magic in my method," Hatfield assured Everybody's Magazine in 1919, continuing:

The problem involved in the production of rain by artificial means resolves itself into the matter of somewhat localizing the ever-present air-borne moisture and condensing it to the point of precipitation. To accomplish this I use certain chemicals, the character of which must naturally remain my secret. I work from towers about thirty-five feet high, on which I have great evaporating tanks. The fumes of the chemicals, by means of the heat I use, are mixed with the surrounding air, which results in what you may term an overturning of the atmosphere. This first produces clouds, cirrus clouds, the forerunners of rain-clouds. In a short time these cirrus clouds develop into a nimbus, or rain-cloud. Yes, it is all very simple. My system is not one of bombarding the heavens, nor do I merely trust to luck. You can understand that luck isn't going to favor the same man something like five hundred times running.

Charles Hatfield died in obscurity in Pearblossom, California in January 1958, at age 82 (his death wasn't reported until three months later). Among the photographs taken of him in the last years of his life are publicity shots of Hatfield posing with the cast members of The Rainmaker, a 1956 film based on the play by N. Richard Nash, which was said to have been loosely inspired by the life of Charles Hatfield. He did not appear troubled by the fact that the title character in that drama (portrayed by Burt Lancaster in the movie) is a flamboyant con man.

Neither Hatfield nor his brother (and sometime assistant) Paul, who died in 1974, ever revealed his secret formula for making rain. All we really know about it to this day is that, according to Hatfield, it contained 23 different chemical ingredients and emitted fumes that bystanders said reminded them of Limburger cheese.