Since 2004 the retail chain's "no solicitation" policy has kept Salvation Army bellringers away from Target stores. 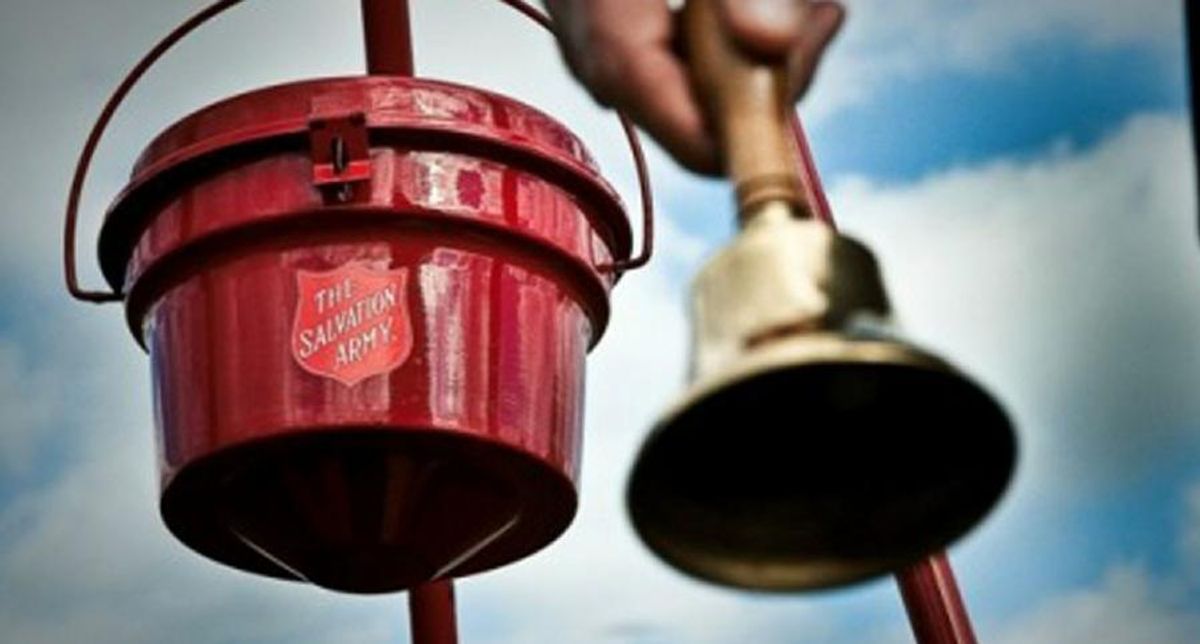 In 2004, the Target retail chain announced a new corporate policy that banned Salvation Army bellringers and their collection kettles from Target storefronts, a move that drew immediate criticism and condemnation from many shoppers:

Target has decided to NOT allow the Salvation Army to ring the bell for the holiday season. I love the bell ringers and what they stand for. Each person gives up their time to collect money for the needy. The holiday season is the perfect time to remind us to share our blessings with others. I try to give something to each bell ringer, no matter how small I know the Salvation Army will put it to good use.

Target announced this week that Salvation Army bell-ringers will no longer be allowed in front of their stores during the holiday season. The retailer tells Eyewitness News, "...Like many nationwide retailers, Target Corporation has a long standing no solicitation policy that must be applied across all of its stores." The Lancaster County Salvation Army says there's no hard feelings, just a rethinking of ways to keep the kettles out and the bells ringing. Nearly a quarter of all donations came from Lincoln's two Target stores. Last year, the Lincoln/Lancaster County Salvation Army raised more than a dollars during their kettle drive.

If you believe in the Salvation Army and want to encourage Target to rethink their decision then go to the link above and send them your comment. And forward this email.

Founded in 1865 as a religious and charitable mission, it provided over in service throughout the U.S. during the past year. Last year they collected about outside the stores.

My response is to make Target a "target" to avoid, and when I see the bell-ringers from the Salvation Army at other stores to drop in a little more and tell them that is my contribution for Target.

If you agree, please pass this on.

P. S. Target says they give over $67 million per years to various worthy causes — one of them being sending drops to the contestants of the show really needy cause!!!!

The retailer already had a policy in place at their stores, but they previously had made an exception for the Salvation Army. That exception finally went by the wayside when in a September 2004 statement, Target spokesperson Carolyn Brookter said the chain "determined that if we continue to allow the Salvation Army to solicit, then it opens the door to other groups that wish to solicit our guests."

"It's becoming increasingly difficult to have an exception to our policy, so we decided we would have no exceptions," Brookter said. "This year we just said it's time make our solicitation policy consistent."

A copy of Target's corporate "No Solicitation Policy," as found on their web site, now explains:

Based on Target's commitment to maintaining a distraction-free shopping experience for our guests, we do not allow Salvation Army bell ringers outside our store nationwide. However, Target proudly supports The Salvation Army, which serves more than 30 million people across the United States each year. Some of our year-round efforts include grants to local chapters, volunteerism and in-kind donations to help those who need it most. Target also partners with The Salvation Army to support its disaster relief efforts in communities across the country.

Target's change in policy was undoubtedly detrimental to the Salvation Army's kettle campaign, which raises up to of the Salvation Army's total annual income for efforts such as funding shelters, offering meal programs, and providing Christmas toys, after-school programs and emergency assistance:

The "miracle" of Christmas is repeated over and over again through the joy of caring and sharing. The traditional red kettle is an integral part of the Christmas scene, with millions of dollars donated each year to aid needy families, seniors, and the homeless, in keeping with the spirit of the season.

Volunteers distribute gifts to shut-ins in hospitals and nursing homes, and shelters are open for sit-down dinners. The Salvation Army endeavors to bring spiritual light and love to those it serves at Christmas so that the real meaning of the season is not forgotten.

Many families receive aid over a period of months after the Christmas season as well, people struggling with difficult family, emotional, or employment problems.

In November 2006, the Salvation Army announced Target had launched a multi-faceted Christmas partnership with it that would include an online version of The Salvation Army’s Angel Tree Program and a donation by the retailer of to get that program up and running. Target also promised to donate 100% of proceeds from the sales of a limited edition Harvey Lewis angel ornament accented with red Swarovski crystals to the Sally Ann.

As of 2011, Target proclaimed that they were providing $250,000 in gift cards to Salvation Army chapters as part of their partnership with that organization:

With gift-giving season in full swing, we took a short break to spend some time with longtime Target partner The Salvation Army. During this time of year, people across the country gather together to give the most important kind of gift – helping those in need.

For each of the last two years, Target has provided $250,000 in gift cards to 96 Salvation Army Chapters to assist their holiday toy drives and Angel Tree program. But, the holidays aren’t the only time to lend a hand.

Year-round, Target proudly supports The Salvation Army as it serves more than 30 million people in the United States. Grants to local chapters, support from team member volunteers, donations and support of disaster relief efforts are just a few of the ways Target helps out.

In fact, over the past five years, Target has provided cash and in-kind donations totaling more than $13.6 million to all The Salvation Army locations nationwide.