Did J.D. Salinger Write in the Nude?

A photograph purportedly showing the famously reclusive author wearing nothing but a pair of sandals actually shows a different writer, Jayson Loam. 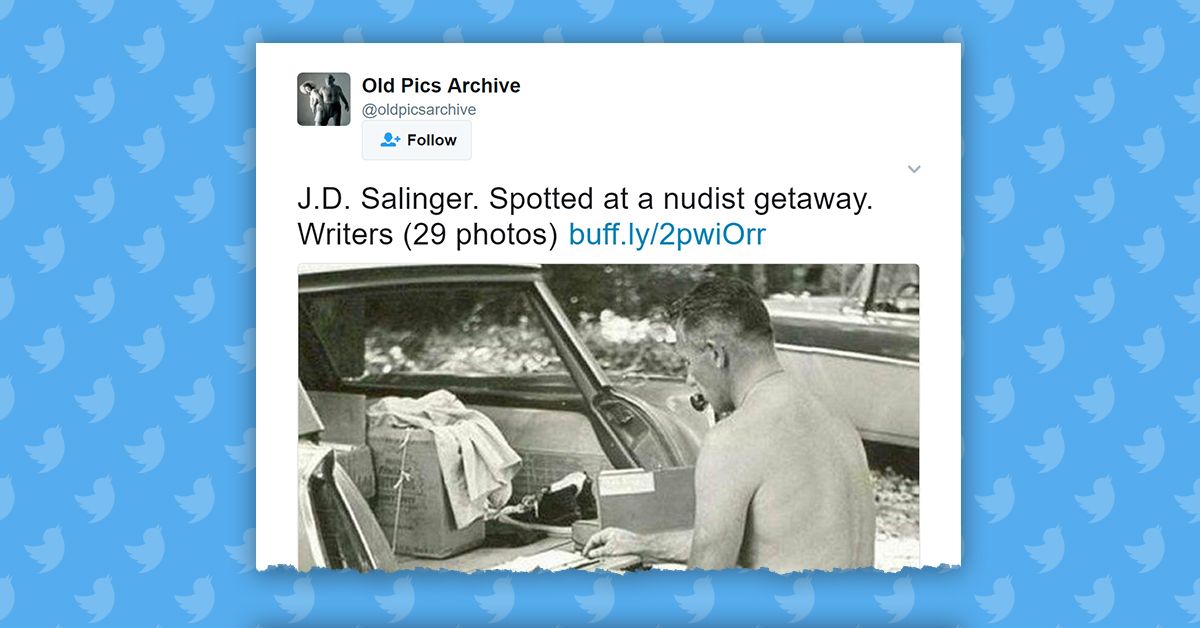 A photograph of a naked man sitting a suitcase and using typewriter received attention on social media on 15 May 2017 after the Twitter account @oldpicsarchive posted it along with the claim that the writer was J.D. Salinger, author of The Catcher in the Rye: Because you cannot see his face, the claim seems plausible. The man in the photograph, however, is not J.D. Salinger, but Jayson Loam (also known as Stan Sohler), a writer for American Sunbathing Magazine. According to the photograph's caption,  which was written by science fiction fan and longtime publisher Earl Kemp (a friend of Loam's) in 2004, Loam was filing copy from a California nudist camp:

Jayson Loam (then Stan Sohler) writing articles for American Sunbathing Magazine out of the back of the family station wagon at Lupin Lodge, a nudist camp between Los Gatos and Santa Cruz, California.

Even so, the photograph has been linked to Salinger since at least 2013, and appears to serve as the sole piece of evidence for the claim that the Catcher In the Rye author was known for writing in the nude. NinjaEssays.com published an infographic showing the "Unusual Work Habits of Great Writers" in 2014, which included Salinger's alleged quirk: However, NinjaEssay's source for this claim was a single post on Quora that simply included this photograph and the author's name.

The photograph also bears only a passing resemblance to J.D. Salinger, who was notorious for hating to be photographed. Photographer Antony di Gesu recalled a 1952 photography session with Salinger (from which many of the most iconic images of him came) in an excerpt from an unpublished memoir:

On the 20th of November, 1952, J.D. Salinger (author of Catcher in the Rye) came to the studio and said he wanted a portrait of himself for his mother and his fiancee. Since I didn’t [know] as much then as I do now, I set up the camera and light and sat him right down. His expression was so rigid and self-conscious [that] I was at my wits end. Nothing happened. I decided on something I had never done before with an adult. I excused myself, went up to my apartment and came down with “Catcher in the Rye.” I brought him a table and ashtray, set down the book (why the hell didn’t I ask him to autograph it?) and suggested he do anything he pleased. Read to himself. Read aloud or just smoke.

If I’d thought he was going to be so damned famous, I’d have written down everything we talked about to get the expression we did. I took 48 5×7 negatives. Serious, thoughtful, smiling, laughing, howling with laughter. White shirt, white background. Black suit, black background. But I don’t remember a thing.

Another clue —  although it is far a conclusive piece of evidence —  is Salinger loved to smoke, but was known for enjoying cigarettes, not pipes.

We were also unable to locate any credible sources confirming that Salinger regularly wrote in the nude, unlike Loam, who evidently had no compunction about writing or being photographed in the nude. In fact, most biographies of the author note that he was a private and very reclusive person, making it unlikely that he ever wrote publicly, much less publicly naked.