Did Congressman Tweet Pix of Russian Warship While Wishing US Navy Happy Birthday?

A quickly deleted tweet may have reverberated online due to Russia's making other headlines in the U.S. 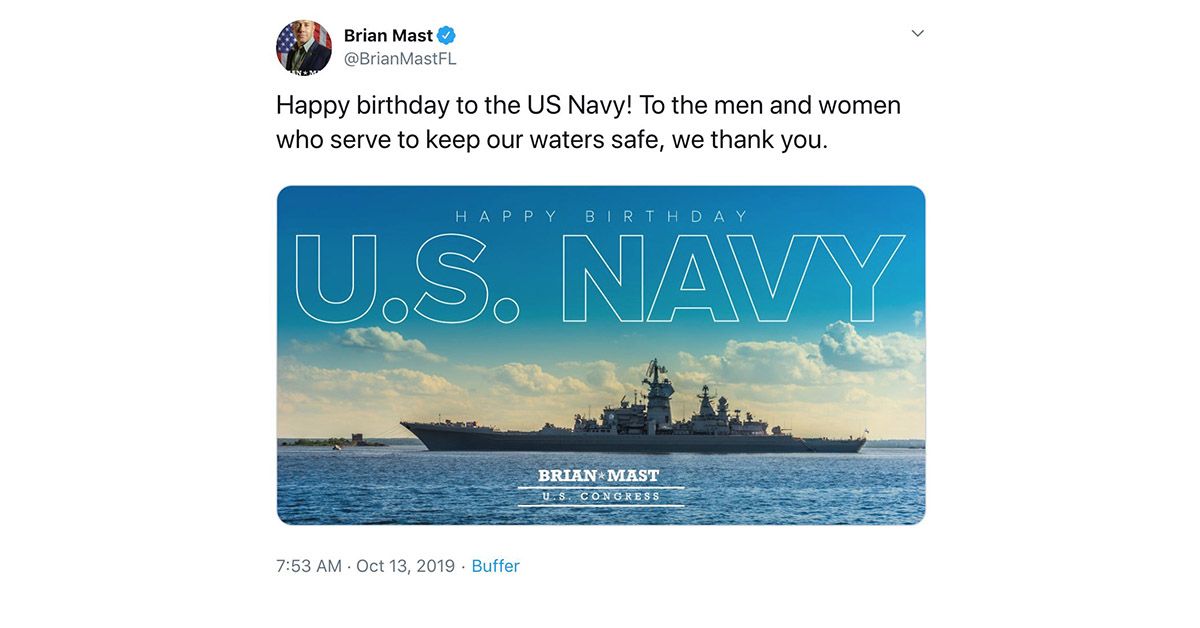 U.S. Congressman Brian Mast, R-Fla., tweeted happy birthday to the U.S. Navy but attached an image of a Russian, not American, warship. The tweet has since been deleted, but not before some users had captured images of it.

The image appeared on Mast's reelection campaign Twitter feed on Oct. 13, 2019, the 244th anniversary of the American naval force. The flub may have gone mostly unnoticed at any other time in history but for ongoing reports that the Russian government meddled in the 2016 U.S. presidential election.

And as of Oct. 13, 2019, the day the tweet was posted, Russia was making news in the U.S. for different reasons: U.S. President Donald Trump pulled U.S. forces from northern Syria in what was widely seen as a betrayal of Kurdish allies, and militarily that appeared to play into the hands of Russian President Vladimir Putin. Kremlin-funded websites RT and Sputnik celebrated the battleship image mix-up.

Mast's campaign spokesman said the error was the result of misleading labeling on the stock image site Shutterstock. The picture of the Pyotr Velikiy available there doesn't show the ship's markings and only carries a vague caption that reads, "A warship on the horizon. Rocket cruiser." Spokesman Brad Stewart said that the picture "was deleted as soon as the mistake was realized."

"Pyotr Velikiy" translates to Peter the Great. The Soviet-era, nuclear-powered battle cruiser is named for one of the most influential czars who ruled the Russian empire, from 1682 until his death in 1725.

The account belonging to Mast, a U.S. Army veteran who lost both legs serving in Afghanistan, deleted the picture of the Pyotr Velikiy and then tweeted a video created by the Navy with a similar message commemorating the military branch's milestone.

Happy birthday to the US Navy! To the men and women who serve to keep our waters safe, we thank you. https://t.co/yYUilgIh7v