Are These 'I'd Rather Be a Russian Than a Democrat' Shirts Real?

A photograph of two men wearing "I'd Rather Be a Russian Than a Democrat" t-shirts was taken at a rally for President Trump in Ohio. 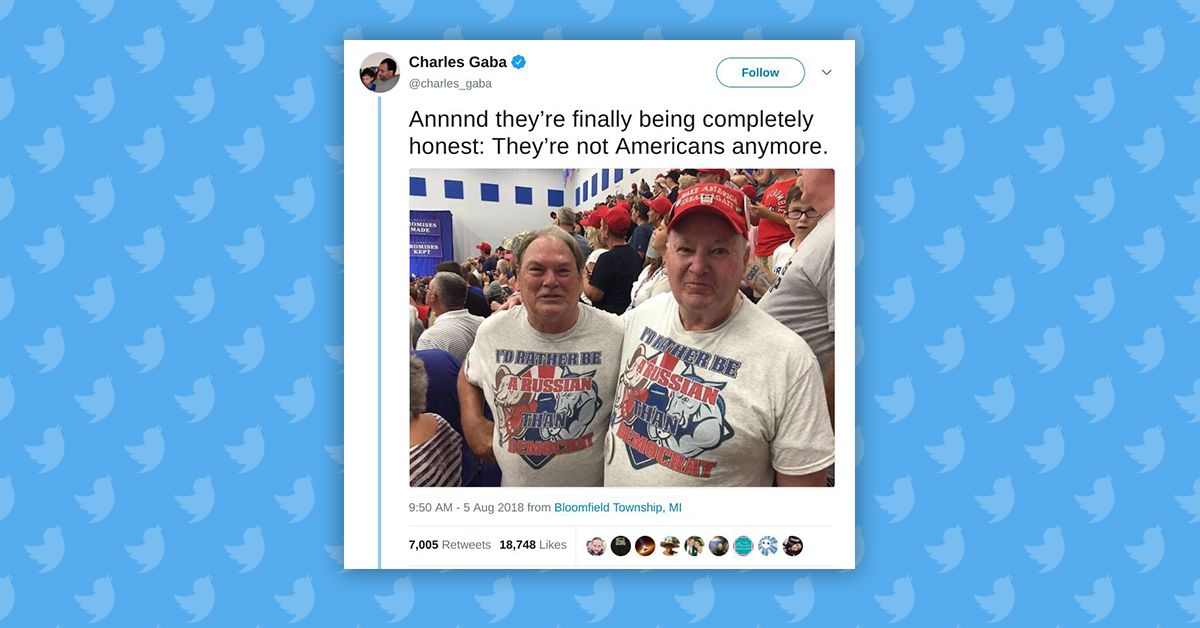 Claim:
A photograph shows two men wearing "I'd Rather Be a Russian Than a Democrat" shirts at a rally for President Trump.
Rating:

On 5 August 2018, a photograph purportedly showing two men wearing t-shirts which read "I'd Rather Be a Russian Than a Democrat" while attending a rally for President Trump hit social media: Some viewers who encountered this image online were so bewildered by the shirt's message — Would supporters of an American president really voice support for a hostile foreign power over their fellow Americans? — that they wondered if the photograph had been doctored in some way. The photograph, however, is real.

This picture was taken by Cleveland.com reporter Jeremy Pelzer at a Trump rally at the Olentangy Orange High School in Ohio on 4 August 2018:

So I took this photo yesterday of two guys from Delaware, Ohio at a Trump rally. Learn more about them here. https://t.co/nEPZFvdCS0 pic.twitter.com/kzdcwWtXfm

Pelzer identified the two men as James Alicie and Richard M. Birchfield and reported that the two men decided to attend the rally because they had never seen a U.S. president in person.

Alicie and Birchfield offered some advice for Democrats:

The two friends from the city of Delaware said they came out to the rally because they've never seen a president in person before. Asked about their shirts, Alicie (left) said he didn't understand why Trump is getting so much criticism about Russia when Hillary Clinton and Barack Obama weren't similarly scrutinized. Asked what he would tell Democrats, Alicie said, "To jump on board this train and give him a chance."

Although some viewers may have been shocked to see the phrase "I'd Rather Be a Russian Than a Democrat" on a t-shirt at a rally for the president of the United States, this slogan can be found on a variety of products offered for sale by several different retailers: It's unclear who manufactured the t-shirts seen in the viral picture. We've reached out to Teechip, a vendor that sells these shirts, for more information.