Is This a Russian Pilot Flying Under a Bridge in 1965?

On June 4, 1965, the military pilot Valentin Privalov flew this plane under the central span of the bridge across the Ob River. 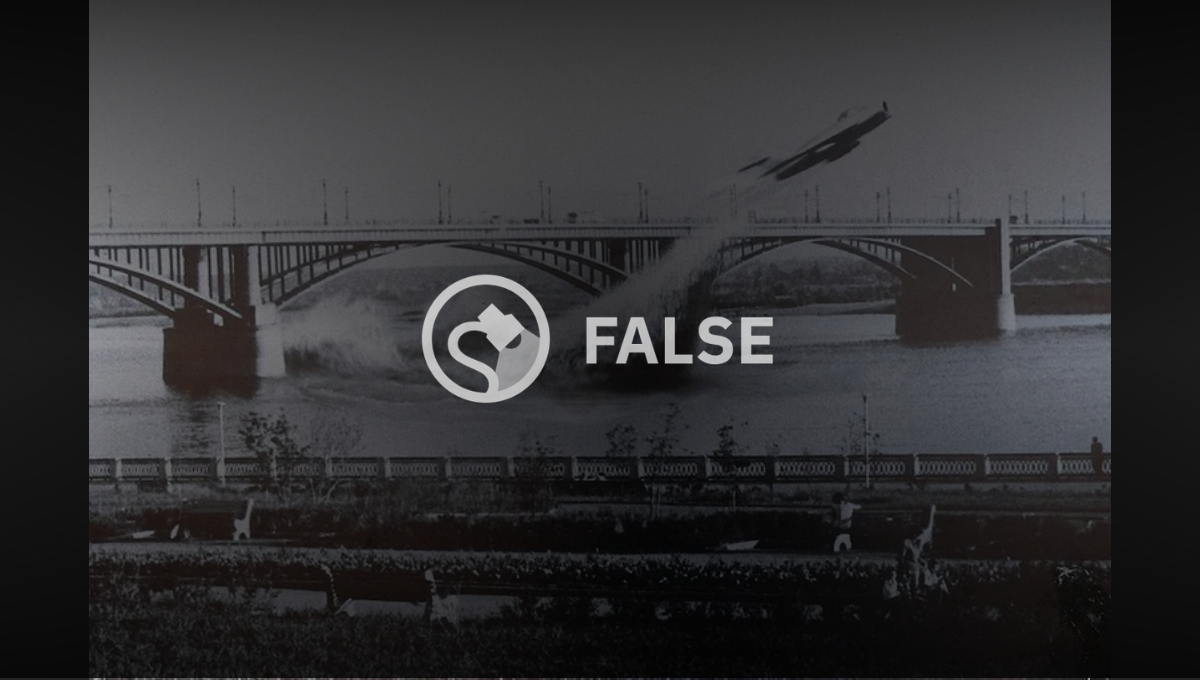 Claim:
A photograph shows a Russian pilot flying under a bridge in 1965.
Rating:

If you travel to Novosibirsk, Russia, you might hear a story about a pilot named Valentin Privalov who reportedly flew a MIG 17 aircraft under the municipal bridge on 4 June 1965. There isn't much photographic evidence of the dangerous stunt, other than this image: This picture is typically accompanied by a few brief sentences about Privalov's stunt. One version of the story was posted to LiveJournal in October 2013, which we have translated via Google and edited for clarity:

On June 4, 1965, the military pilot Valentin Privalov flew this plane under the central span of the bridge across the Ob River. The day was hot and sunny, the beach on the shore filled with vacationers, with officers of the district headquarters among them. Suddenly, the plane rushed at everyone in front of the bridge like a silver arrow then abruptly soared upward into the sky. The distance between the bridge supports is 120 m, the height of the span is 30 m. The aircraft entered this "window" at a speed of 700 kilometers per hour. At this speed, even a slight touch to the control knob changes the height of the aircraft by meters. The plane flew just a meter above the surface of the water. The circumstances were complicated by the fact that at a distance of only 950 m downstream from the Communal Bridge is the railway bridge of the Zapsib highway, and the train was passing through it. The pilot had only five seconds to gain altitude without hitting this bridge.

The only person in the world who could fly a jet plane under a bridge, Novosibirsk pilot Valentin Privalov, on June 4, 1965. Collage by a Novosibirsk museum staff member.

An informational placard about Privalov's stunt that was created for the museum's "City Born To Fly" street exhibit in 2013 contained a wider version of this photograph. The Russian word "фотомонтаж" can be seen in the bottom right-hand corner of the image, which translates to "photo collage": In addition to the documentation at the Novosibirsk Museum, we also found a brief mention of the stunt in a contemporary English-language news wire:

The government newspaper Izvestia yesterday chastised three residents of Novosibirsk, 2,000 miles from Moscow in the Soviet Wild East, for "hooliganism." The paper put the finger on a drunk who stole a streetcar, a stunt flier who flew under bridges, and an aircraft mechanic who went on a joyride up and down runways in an Ilyushin-f transport. Izvestia said the drunk overturned the trolley, the pilot terrified bathers, and the mechanic finally had to be stopped by authorities.

To sum up: The viral image of a plane flying underneath a bridge in Russia in 1965 is not a genuine photograph. It was created for a museum display in order to illustrate what the storied flight might have looked like.