Video of 'Paratroopers Landing in Ukraine' is Miscaptioned 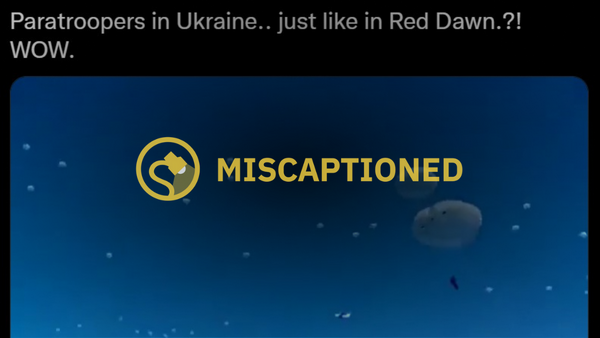 Claim:
A video shows Russian paratroopers landing in Ukraine during an attack in February 2022.
Rating:

On Feb. 24, 2022 (local time in Ukraine), Russia launched a full-scale invasion of Ukraine. As the tumultuous events unfolded on the news, social media quickly filled up with doctored, misleading, and miscaptioned images. One such video supposedly showed Russian paratroopers landing in Ukraine like in the movie "Red Dawn":

This video, which has racked up nearly 400,000 videos, is several years old. It does not show Russian paratroopers landing in Ukraine during the February 2022 invasion.

The video can be traced back to at least 2016 when it was shared on Twitter with the caption "запомните, именно так выглядят Российские десантники" or "remember, this is what Russian paratroopers look like."

A March 2014 post on Military.com appears to contain a longer version of this clip. Military.com reported at the time that the footage showed "15,000 Russian airborne troops being dropped in the Rostov Obslat region of Russia with their equipment."

If you encounter something online that you would like verified, please drop us a line, and we'll try to look into it.