The photograph is real, but was it a political statement? 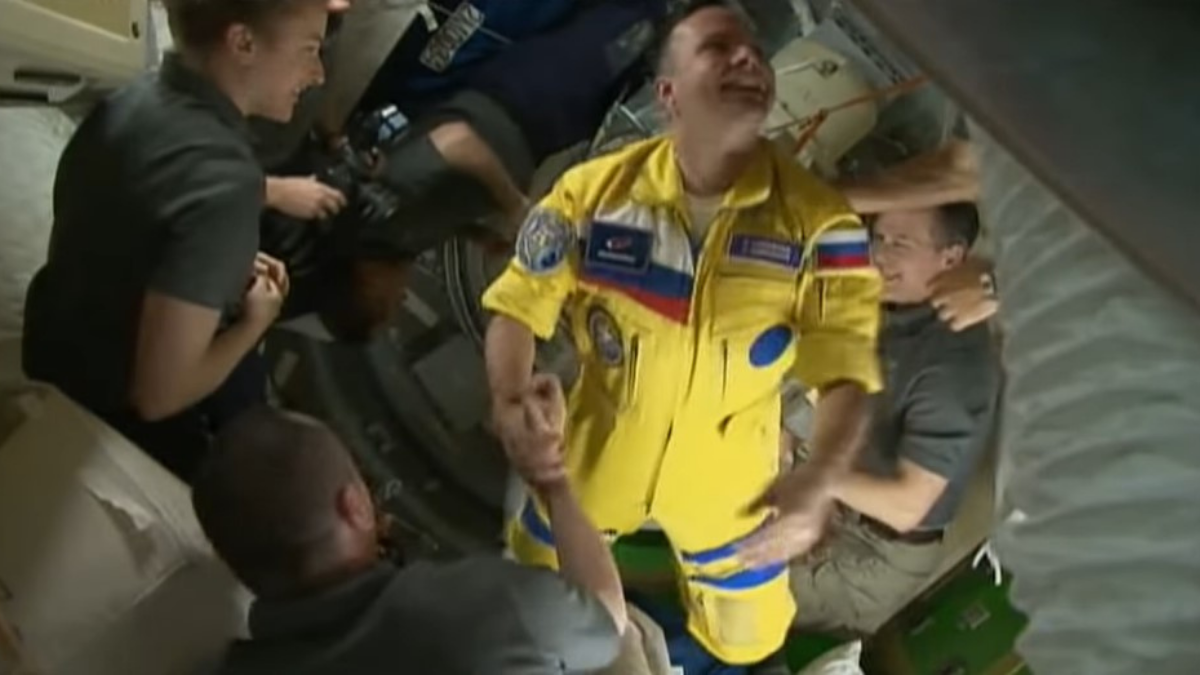 This is a genuine photograph of Russian cosmonauts dressed in blue-and-yellow (the colors of the Ukrainian flag) spacesuits. However, this appears to be more of a coincidence than a political display. These spacesuits were chosen months before Russia's attack on Ukraine in early 2022.

In February 2022, in the days after Russia launched an attack on Ukraine, people around the world expressed support for Ukraine by donning the colors blue and yellow, the colors of the Ukrainian flag. So when a photograph started to circulate in March 2022 showing Russian cosmonauts wearing these colors, many people assumed that they were voicing their opposition to the war from the relative safety of the International Space Station.

This is a genuine photograph of Russian cosmonauts wearing blue and yellow spacesuits aboard the International Space Station (ISS) in March 2022. However, this appears to be more of a coincidence than a political statement.

Here's a video of the cosmonauts arriving at the International Space Station:

Astronauts don't exactly have the luxury of going into their closets or running to the store in order to pick out a wardrobe to reflect current events. Rather, they have to wear spacesuits designed and made in the months leading up to their mission. In other words, these blue-and-yellow spacesuits were selected by these cosmonauts long before Russia launched its attack on Ukraine in February 2022.

Oleg Artemyev, one of the cosmonauts seen above, said as much when asked about the spacesuits during a livestream. According to The Associated Press, Artemyev said: "It became our turn to pick a color. But in fact, we had accumulated a lot of yellow material, so we needed to use it. So that’s why we had to wear yellow."

Roscosmos, Russia's space agency, also dismissed the idea that these cosmonauts were wearing blue-and-yellow spacesuits in support of Ukraine. In a Telegram post, Roscosmos said that "sometimes yellow is just yellow," that the "design of the uniform was agreed upon long before current events," and that these colors were chosen as a nod to Bauman Moscow State Technical University, where all three cosmonauts graduated. Here's a screenshot from Roscosmos Telegram channel that includes the school's emblem: While it's true that these Russian cosmonauts wore blue-and-yellow spacesuits, these colors were not chosen as an expression of support for Ukraine.

Vlamis, Kelsey. “Russian Cosmonauts Boarded the International Space Station Wearing Yellow and Blue, the Colors of Ukraine’s Flag, but It Might Not Be the Show of Support It Seems.” Business Insider, https://www.businessinsider.com/russian-cosmonauts-board-international-space-station-in-ukraine-colors-2022-3. Accessed 21 Mar. 2022.