Did Rudy Giuliani's Hair Dye 'Melt' During a News Conference?

While we're not sure exactly what this substance is, these images are real. 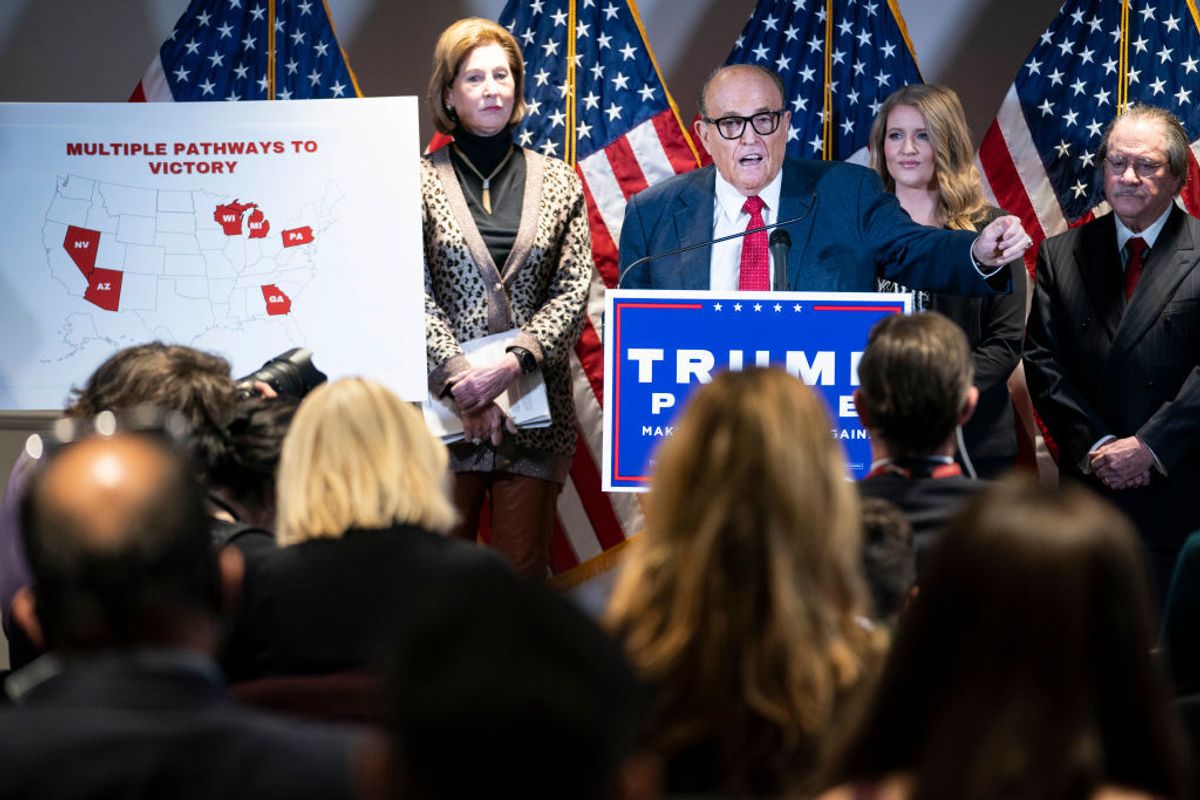 Image Via Sarah Silbiger for The Washington Post via Getty Images

The photographs are genuine.

The makeup of the substance is unknown.

On Nov. 19, 2020, U.S. President Donald Trump's personal lawyer, Rudy Giuliani, who was hired by Trump's reelection campaign to file legal challenges to the results of the 2020 election, gave a conspiracy theory-laden news conference alleging widespread voter fraud. While Giuliani urged viewers to take his evidence-free claims seriously (BBC's Americas Bureau Chief Paul Danahar called it the "most unsubstantiated diatribe" he had ever witnessed), much of the conversation on social media dealt with some odd images of New York City's former mayor that reportedly showed dark streaks of hair dye running down his face:

This is a genuine photograph of Giuliani during his news conference that was taken by Tom Williams. The image is available via Getty Images along with the caption:

UNITED STATES - NOVEMBER 19: Rudolph Giuliani, attorney for President Donald Trump, conducts a news conference at the Republican National Committee, on lawsuits regarding the outcome of the 2020 presidential election on Thursday, November 19, 2020. (Photo By Tom Williams/CQ-Roll Call, Inc via Getty Images)

There are several additional pictures of Giuliani from this news conference with dark streaks running down his face. The following photo, for example, was taken by Sarah Silbiger of The Washington Post: While these photographs are undoubtedly real, there is some debate over what caused the dark streaks down Giuliani's face. While most social media users presumed that it was melted hair dye, some hair care experts disagreed.

David Kholdorov of the Men’s Lounge Barbershop and Spa on Manhattan’s Upper East Side told The New York Times: "Hair dye doesn’t drip like that, unless it’s just been applied."

Mirko Vergani, the creative color director at the Drawing Room, said that the streaks may have been caused by mascara that was applied to the sideburns: "Sideburns are more gray than the rest of the head ... You can apply mascara to touch the gray side up a bit so it looks more natural."

Slate also launched an investigation into the strange streaks With the help of Nicole Wingo from Washington D.C.’s Barber of Hell’s Bottom, they concluded that it was likely some sort of pomade with a semi-permanent coloring effect:

WINGO: The hair journey that these guys are on is definitely a wild one. I think something like that is probably the result of a tinted product. I wouldn’t think that that was a demi-permanent or semi-permanent color. I would think it’s a topical product, like a pomade or a tinted gel that got really … gooey.

SLATE: So this is not a product you’re familiar with or use with your clients? Would this be the kind of thing you’d buy at the drug store?

WINGO: This is not something that I’ve seen on my clients. The only products I can think of that offer a color payoff in addition to a styling component are gray products that you see at the drugstore or darker gels or pomades. As far as higher-end things go, I don’t know of any topical products that have pigments in them for just like a day on the town, you know? I would guess that something like this is the $8 to $15 range.

While Giuliani's streaks stole the show at this news conference, the event also gave reporters plenty to discuss. For instance, Giuliani, at one point, invoked a character with notoriously bad eyesight from the movie "My Cousin Vinny" to make a point about observing poll watchers from an appropriate distance.  As for the rest of Giuliani's news conference, Fox News reporter Kristin Fisher said that most of what Trump's personal lawyer alleged was "simply not true":