Does this Photo Show a Rubber Duck Armada Lost at Sea?

The accompanying caption claims that the pictured toys were being observed by scientists to study ocean currents. 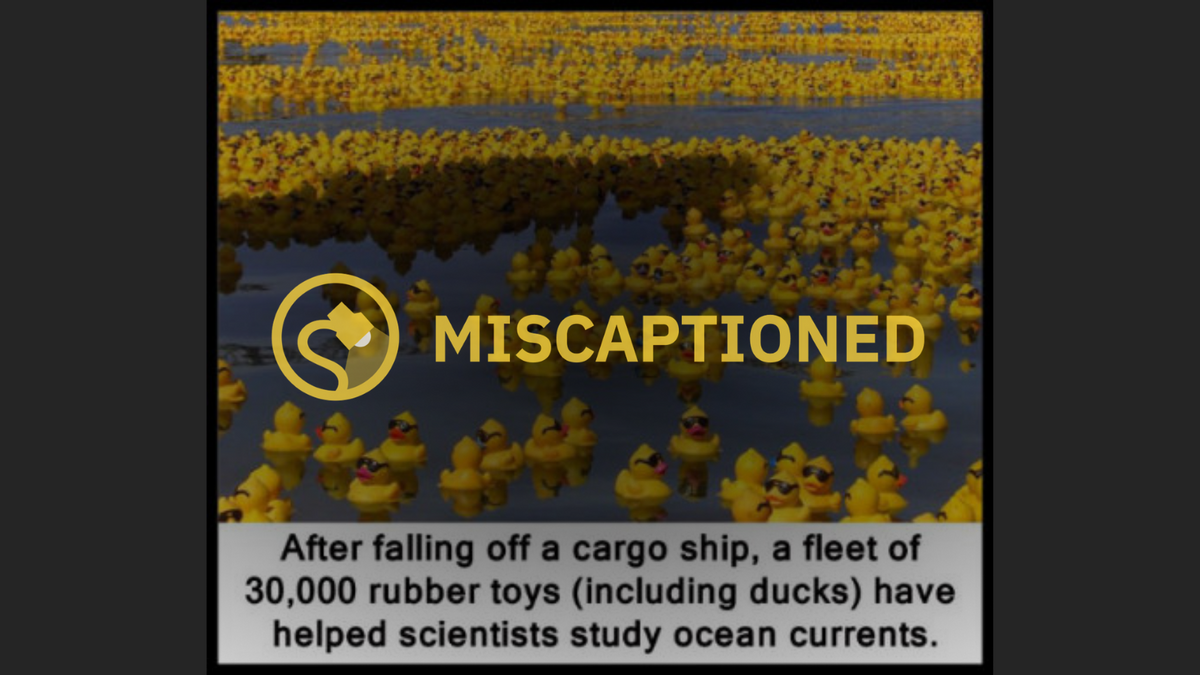 Claim:
A photograph shows thousands of rubber ducks lost at sea in 1992.
Rating:

This example was collected from the Snopes inbox in March 2015: Origins:  On 22 March 2015, the Facebook group AsapSCIENCE posted a photograph which they described as showing "the friendly floatees," a group of rubber ducks that have been floating in the ocean since being lost at sea in 1992:

The Friendly Floatees (as they're called) fell into the Pacific Ocean in 1992 and have been washing up on shores internationally ever since.

The posted photograph is authentic, and the caption accompanying it does describe a real event, but the two don't match: the rubber ducks shown in the image are not the infamous Pacific Ocean "friendly floatees." The above-displayed picture was taken by photographer Cassie Marshall at the Ken-Ducky Derby, an annual rubber duck race held in Louisville, Kentucky:

A few months ago I entered some of my photos in the Capture Kentuckiana Project. The project involved local amateur and professional photographers submitting their work to be viewed by the Courier-Journal staff as well as each other. Photos were voted upon and out 11,688 photos submitted 144 were chosen for the book. The book is a representative of Kentuckiana. I won $50 and second place for a photo I submitted in the 'News and Events' category! The photo was 'Rubber Duck Sea'. Funny enough it is one of my least favorite photos I submitted (yet it seems to be my most popular on here too), but I supposed I shouldn't be picky. I'm pretty proud of my accomplishment nonetheless because I was able to get my name out around Louisville as a photographer. Hopefully this will lead to bigger and better things!

Although Marhsall's photo did not capture a group of rubber ducks "lost at sea," the gist of the caption used by AsapScience is true. In 1992, a shipping crate carrying more than 25,000 bath toys (including ducks, beavers, blue turtles and green frogs) spilled into the Pacific Ocean, creating a group of Friendly Floatees that have inspired children's books, Disney movies, and helped oceanographers locate the North Pacific Gyre:

Perhaps the most famous Floatees, though, are the some 2,000 of them that still circulate in the currents of the North Pacific Gyre — a vortex of currents that stretches between Japan, southeast Alaska, Kodiak, and the Aleutian Islands that the plight of the duckies helped to identify. "We always knew that this gyre existed. But until the ducks came along, we didn't know how long it took to complete a circuit," said (Curtis Ebbesmeyer, a retired oceanographer and Floatee enthusiast). "It was like knowing that a planet is in the solar system but not being able to say how long it takes to orbit. Well, now we know exactly how long it takes: about three years."