Are Robbers Using Rubber Bands to Break Into Houses? 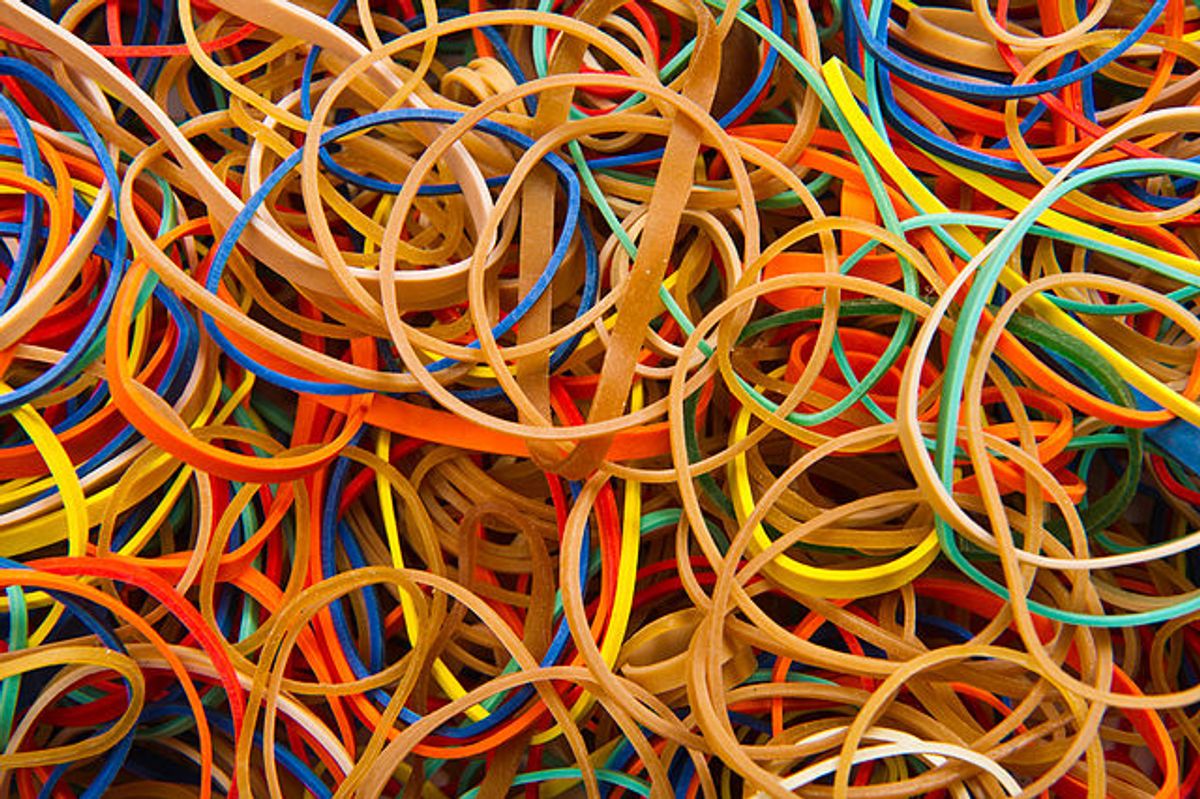 On 21 April 2016, Facebook user Kim Fleming posted an image of a rubber band stretched over a door latch handle, along with a message warning people about a new method of employing rubber bands purportedly used by thieves to break into homes:

Warning!!! Two weeks ago during the day, a hard knock was at my front door, not a regular knock but almost pounding, (I honestly thought something may have happened to someone and they needed help) but something didn't feel right....and I DO NOT answer the door when I am here by myself. So don't bother! After several Knocks, they finally left. I glanced and could see it was a man through the stained glass of my door. After about 30 minutes I walked outside to look for what I thought would be a brochure, but instead found a rubber band around my knob to hold the door to open when I unlocked the latch. I called Ron and he told me to get the gun out and leave it out. The Sheriff came by yesterday and said this is happening all of a sudden, as soon as you unlatch the door, they do not wait for you to turn the knob, they can bust in on you. Anyway just be careful, I USE to be such a trusting person, but not at all anymore! So let me just say, I have a GUN and I know how to use it, just FYI, I out shot my husband the last time we target practiced, so believe me, I will use it. I have too much to live for! Do NOT ANSWER doors without knowing for sure you know who is on the other side! Those days are over!!!! Kids need to be made aware of this too! Some techniques (of varying efficacy) have been demonstrated for using rubber bands to defeat chain locks and ordinary doorknob locks, but we're skeptical that what's pictured here had anything to do with a home invasion attempt.

The method described in this Facebook post doesn't seem to provide any advantage to a would-be robber. The scenario imagined above involves a thief's standing outside of a locked door and waiting for it to be unlocked before barging in — but hanging around the porch of a house waiting some indeterminate amount of time for the door to be unlocked is an awfully conspicuous and inefficient break-in method, and it isn't much facilitated by the use of a rubber band (since the would-be thief could simply hold the latch handle down with his thumb instead). And how is this method any easier or faster or more furtive than just knocking on the door and pushing it wide open once the resident answers it?

Kim's post also claimed that this style of home invasion has been "happening all of a sudden," but we were unable to uncover any news reports involving a similar scheme. While a specific location wasn't mentioned in the original message (which was shared more than 100,000 times within a few days of its initial posting) Kim's response in the comments section mentioned Tatum, Texas, and stated that this was also happening in Bossier, Louisiana:

Yet we found no warnings issued by the Tatum Police Department or the Bossier Sheriff Department regarding rubber bands and home invasions.

Lastly, the bulk of Kim's post had more to do with guns and a general mistrust of strangers (who could conceivably barge in through an exterior door any time you opened it, rubber bands or no rubber bands) than it had to do with a specific home invasion technique. It's possible people were confusing the combination of rubber band and door lock with other more effective techniques for defeating locks (such as the ones linked above), and/or that the placement of a rubber band shown here was unrelated to any potential criminal activity (i.e., it was just used to hold a brochure or newspaper that blew away or was removed by someone else).

We reached out to Kim Fleming Cernigliaro (as well as the aforementioned police departments) for more information with no response, but it appears that this Facebook message employed a fictional scenario in order to spread a general message encouraging caution when opening doors to strangers.