Did Woman Who Died at Capitol Riot Carry a 'Don't Tread on Me' Flag? 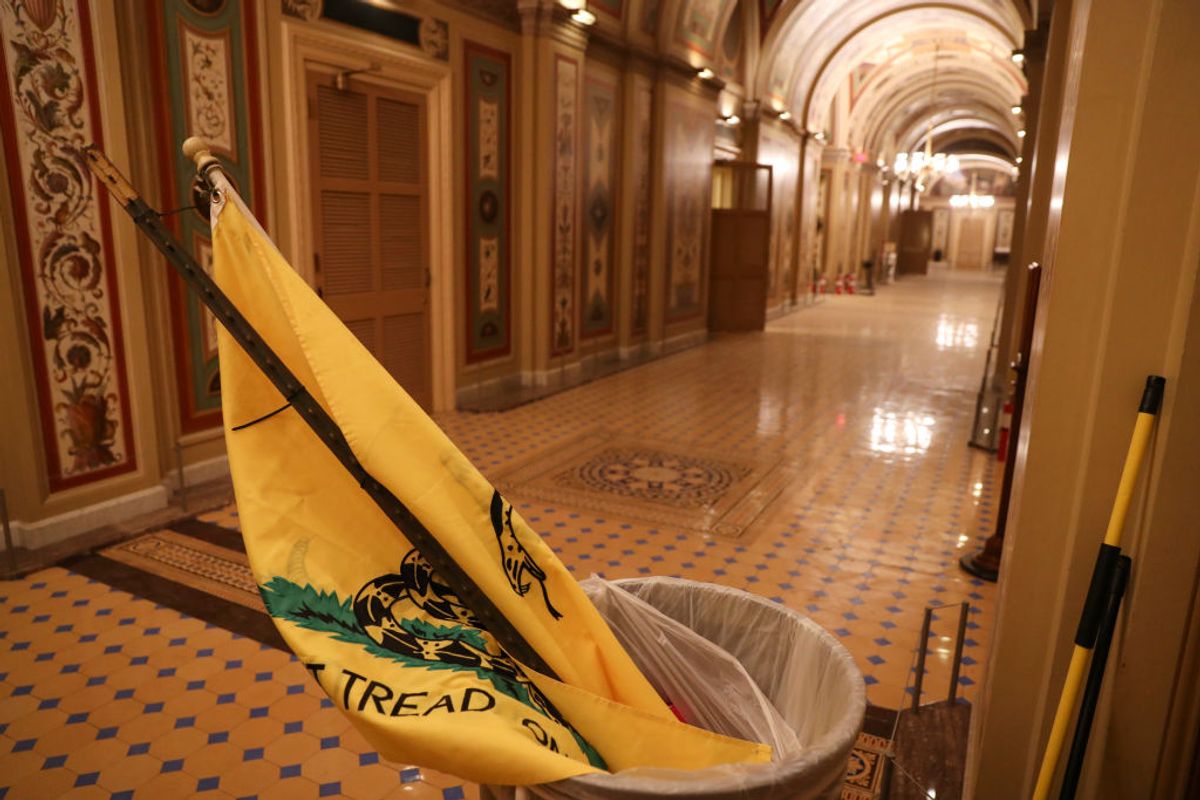 Claim:
Rosanne Boyland was trampled to death at the U.S. Capitol riot in January 2021 after carrying a Gadsden flag that read "Don't tread on me."
Rating:

Boyland undoubtedly carried and displayed a yellow and black Gadsden flag to the pro-Trump "Save America" rally in Washington, D.C., on Jan. 6, 2021. Based on video footage and witness reports, she died after being trampled during clashes between police and rioters at the U.S. Capitol.

It is not yet known whether the injuries Boyland suffered from being trampled upon were the sole cause of her death, a contributing factor, or if she died from some other cause which also caused her to fall to the ground.

On Jan. 6, 2021, Rosanne Boyland died from what police described as a "medical emergency" while she took part in a rally that descended into violent and destructive riots at the U.S. Capitol.

The family and friends of Boyland, 34, from Kennesaw, Georgia, said she had immersed herself in online conspiracy theories in support of outgoing President Donald Trump, and her Facebook page shows she had a preoccupation with debunked allegations that President-elect Joe Biden's election victory was fraudulent or illegitimate.

On Facebook, Boyland's friend Sarah Lewis paid an emotional tribute to a woman she described as her best friend for more than three decades:

Lewis also issued a warning for others whose loved ones have become embroiled in online conspiracy theories, in the midst of the 2020 presidential election, Trump's defeat, and the COVID-19 coronavirus pandemic, saying:

"I hope this is a wake-up call to everybody. Check on your friends. We've all watched her decline and go on these rabbit trails. ... This all really fucked with her head —the QAnon conspiracies, the elections, the unrest, the virus ... "

In the days following the Jan. 6 attack on the U.S. Capitol, and the deaths of five individuals who took part in the events of that day, some online observers highlighted a detail taken from a photograph of Boyland at the rally, and a description of the events leading up to her death.

On Jan. 7, Atlanta CBS affiliate WGCL broadcast an interview with Justin Winchell, a friend of Boyland's who travelled with her from Georgia to Washington, D.C., to attend Trump's "Save America" rally at the Ellipse, next to the White House, before moving to Capitol Hill, where the demonstration turned violent.

The interview can be viewed below. The following is a transcript of Winchell's description of the moments leading up to Boyland's death, and reporter Zac Summers's narration:

Winchell: They basically created a panic, people created a panic. And the police, in turn, pushed back on them.
Summers: Winchell says the trouble started when a couple of guys started pushing people. The crowd then clashed with police, trampling over one another, sending 34-year-old Boyland to the ground.
Winchell: I got my arm underneath her, and I was pulling her out, pulling her out, and then another guy fell on top of her, and then another guy was just walking. I mean, there was people crushed.
Summers: Winchell says paramedics tried reviving his friend, but she died.

The WGCL report included what appeared to be a photograph of Boyland at the Jan. 6 rally, carrying what is known as a Gadsden flag — a yellow and black design containing a coiled snake and the warning "Don't Tread On Me." Over the years, the Gadsden flag has been displayed and used in a variety of contexts, some of them innocuous, but it has recently become closely associated with right-wing militias and supporters of Trump.

To some online observers, those details created a degree of irony in the circumstances surrounding Boyland's demise — namely that she was, according to Winchell's description, trampled to death after having carried a flag that read "Don't tread on me."

We are issuing a rating of "Mostly True" as to those core claims. Boyland did undoubtedly carry a Gadsden flag to the Trump rally, and, based on video footage and witness reports, she was trampled before later dying in a hospital. However, it's not yet clear whether the injuries she sustained by being trampled were what caused her death, or if her death was caused by something else, such as a medical emergency, which might also have prompted her to fall to the ground.

This fact check was updated, and the rating changed from "Mixture" to "Mostly True," after The New York Times published a detailed analysis of video footage from the riot, which demonstrated that Boyland was indeed trampled.

The photograph included in WGCL's report is authentic. It was tweeted out by Summers on Jan. 7 and can be viewed below: In an email, Summers confirmed for Snopes that Winchell provided him that photograph, and that it was indeed taken during the events of Jan. 6. This part of the claim — that Boyland carried and displayed a Gadsden flag with the words "Don't tread on me" on the day of the riots — was accurate.

We attempted to verify Winchell's description of the events leading up to Boyland's death. On Jan. 7, the District of Columbia Police Department (DCPD) listed her as one of the individuals who had died during the events of the previous day, writing on Twitter that she had suffered a "medical emergency."

Snopes asked DCPD for further details, and a department spokesperson provided a brief incident report, which can be read in full here. (In light of reports of harassment and intimidation against various individuals even tangentially involved in the events of Jan. 6, Snopes has, on this occasion, redacted the names of DCPD personnel).

The report states that DCPD were called to the Capitol on the evening of Jan. 6 after receiving a report that Boyland "was witnessed to collapse" during the riot around 5 p.m. and was suffering a "medical emergency." Upon arrival, DCPD found two U.S. Capitol Police officers giving her CPR inside the Capitol Rotunda.

The DCPD officers took over and then transported Boyland to a local hospital, where she was pronounced dead at 6:09 p.m.

Snopes could find no evidence that an autopsy has been performed, so the DCPD incident report is, at time of writing, the only official account of Boyland's death. It does not corroborate Winchell's claim that she died as a result of being trampled, and instead states that she had "collapsed."

However, on Jan. 15, 2021, The New York Times published a report which included additional witness testimony and, crucially, video footage that corroborated Winchell's account. The Times supplemented that video evidence with an additional report, published on Jan. 28, which contained footage recorded by the bodyworn camera of a Metropolitan Police officer on the scene at that time.

Taken together, those witness descriptions and video evidence constitute convincing proof that Boyland was indeed trampled under foot during the riot.

However, it remains possible that Boyland collapsed independently and was subsequently struck by others while on the ground. In the absence of an autopsy report, which would likely clarify the precise cause and manner of Boyland's death, we can't say with certainty that she was "trampled to death," though we do now have confirmation that she was trampled. As a result, we are issuing a rating of "Mostly True."

[Updated] Jan. 19, 2021: Changed rating from "Mixture" to "Mostly True." Added reference to New York Times article that contained additional witness testimony and video evidence, corroborating the claim that Boyland had been trampled under foot at the Capitol riot on Jan. 6.