A farmer who attempted to rope a deer described the hilariously painful experience. 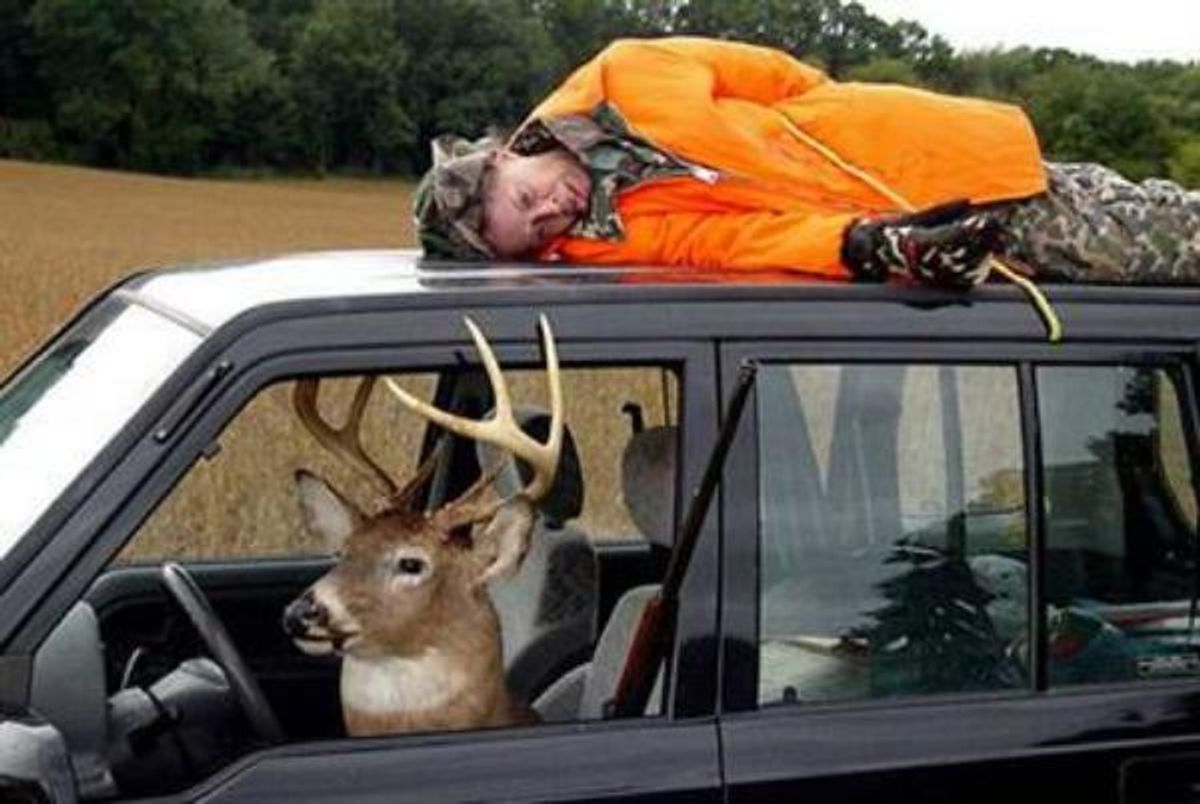 Claim:
A farmer who attempted to rope a deer described the hilariously painful experience.
Rating:

While the view of deer held by urban dwellers posits these creatures as big-eyed cute critters that are all grace and gentleness, those who actually deal with them know these animals to be incredibly strong and at times vicious, a reality far removed from the "Bambi" image cherished by so many. Deer, especially when enraged or terrified, can be quite dangerous to deal with: they're fast, strong, agile, and armed with sharp hooves (and sometimes antlers). Usually only the foolhardy or those unwittingly trapped in enclosed spaces with them attempt to wrestle deer; the rest choose to stay well away, lest they come to harm. Even those faced with the difficult task of rescuing deer from where they've become trapped accord them respect, knowing all too well that a terrified deer attempting to free itself from whatever is holding it in place can quickly cause serious harm to those looking to afford it assistance. (In January 2007, police in Oregon found a novel solution to that problem: they resorted to using a stun gun on a deer whose antlers had become tangled in a rope swing at a rural home because the several hundred pounds beast was thrashing wildly and could not otherwise be safely approached. The zapped buck was subsequently freed and shortly thereafter "took off happy as a clam," said the officers on the scene.)

While we can't yet confirm or dismiss the "roped deer" story (its author remains unknown to us), there isn't much reason to doubt the tale, in that deer can and do act as described when detained. Even the bit about the deer's not immediately leaving the scene once freed but instead continuing to pummel its former captor fits what is known about deer, some of whom have been known to repeatedly ram cars that have hit them.

Our earliest sighting of this tale dates to February 2007, when it circulated as a much longer version that placed the incident in Kansas. Around February 2008, someone thought to shorten the original by clipping off all the wording that followed "I finally managed to crawl under the truck and the deer went away," then adding in its place the piece's current completing line of "So now I know why when people go deer hunting they bring a rifle with a scope so that they can be somewhat equal to the Prey."

The author of the roped deer tale still remains unknown, for reasons he explains very well in the excised paragraphs:

Now for the local legend. I was pretty beat up. My scalp was split open, I had several large goose eggs, my wrist was bleeding pretty good and felt broken (it turned out to be just badly bruised) and my back was bleeding in a few places, though my insulated canvas jacket had protected me from most of the worst of it. I drove to the nearest place, which was the I got out of the truck, covered in blood and dust and looking like hell. The guy who ran the place saw me through the window and came running out yelling, "What happened?"

I have never seen any law in the state of Kansas that would prohibit an individual from roping a deer. I suspect that this is an area that they have overlooked entirely. Knowing, as I do, the lengths to which law enforcement personnel will go to exercise their power, I was concerned that they may find a way to twist the existing laws to paint my actions as criminal. I swear... not wanting to admit that I had done something monumentally stupid played no part in my response. I told him "I was attacked by a deer". I did not mention that at the time I had a rope on it. The evidence was all over my body. Deer prints on the back of my jacket where it had stomped all over me and a large deer print on my face where it had struck me there. I asked him to call somebody to come get me. I didn't think I could make it home on my own. He did. Later that afternoon, a game warden showed up at my house and wanted to know about the deer attack. Surprisingly, deer attacks are a rare thing and wildlife and parks was interested in the event. I tried to describe the attack as completely and accurately as I could. I was filling the grain hopper and this deer came out of nowhere and just started kicking the hell out of me and BIT me. It was obviously rabid or insane or something.

EVERYBODY for miles around knows about the deer attack (the guy at the has a big mouth). For several weeks people dragged their kids in the house when they saw deer around and the local ranchers carried rifles when they filled their feeders. I have told several people the story, but NEVER anybody around here. I have to see these people every day and as an outsider — a "city folk". I have enough trouble fitting in without them snickering behind my back and whispering, "There is the dumbass that tried to rope the deer!"