Was a Giant System of Roots Discovered Below the Devil's Tower Rock Formation?

A Facebook page reported that Devil's Tower, a large rock formation in Wyoming, was actually the remnants of a giant tree. 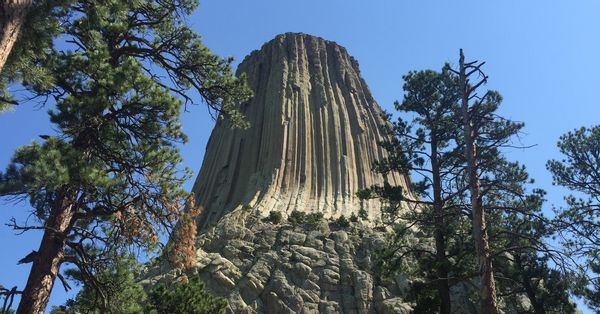 Claim:
A large root system was discovered below Devil's Tower in Wyoming.
Rating:

On 31 July 2017, the Facebook page "Casper Planet" posted a message with the claim that the Wyoming State Parks Department had discovered a large network of tree roots beneath the base of Devil's Tower (which, if you have never been, you may recognize from the film Close Encounters of the Third Kind): A huge and startling discovery has been made at the Devils Tower in Wyoming. Scientists from the Wyoming State Parks Department were conducting photographic seismic readings below the tower, when they discovered an incredibly large petrified root system below the tower. The parks department released a statement saying, "We have discovered, what looks like a giant root system stemming from the base of The Devils Tower. The root system has been measured at 4 miles deep by 7 miles wide. We are currently conducting studies and tests to confirm that this is actually a root system and not a coincidence." This discovery is on the edge of rewriting history and science as we know it.

We will continue to update you with any new information, as at this time information is very limited.

This would be an exciting, landmark discovery ... except that there is absolutely no truth to the claim. The "Casper Planet" Facebook page is an entertainment Facebook page that frequently posts photoshopped pictures, political jokes, and other humorous content.

The "About" section of the page clearly says that their content is served with a "big side order of satire":

Delivering the news that doesn't matter directly to your news feed with a big side order of satire!

In this case, "Casper Planet" is mocking a conspiracy theory, which springs out of flat-earth theory, holding that most mountains are simply the remains of ancient, gargantuan trees. Although "Casper Planet" did include a genuine photograph of Devil's Tower, the pictured root system has little to do with the famous igneous rock formation in Wyoming. The image is actually a diagram showing how the roots of sweet corn have developed after eight weeks:

The original image (right) showed that the roots extended four feet into the ground. It appears that "Casper Planet" changed this label to read four miles.

Although geologists are not entirely in agreement about how Devil's Tower was formed, this debate is more focused on the formation process, and less about whether the earth was once populated with atavistic, ten-mile-high trees:

In 1907, scientists Darton and O'Hara decided that Devils Tower must be an eroded remnant of a laccolith. A laccolith is a large, mushroom–shaped mass of igneous rock which intrudes between the layers of sedimentary rocks but does not reach the surface. This produces a rounded bulge in the sedimentary layers above the intrusion. This idea was quite popular in the early 1900s when numerous studies were done on a number of laccoliths in the Southwest.

Other ideas have suggested that Devils Tower is a volcanic plug or that it is the neck of an extinct volcano. Although there is no evidence of volcanic activity — volcanic ash, lava flows, or volcanic debris - anywhere in the surrounding countryside, it is possible that this material may simply have eroded away.

The simplest explanation is that Devils Tower is a stock — a small intrusive body formed by magma which cooled underground and was later exposed by erosion.

Wyoming State Parks did not, does not, has not and will not be participating in any kind of scientific study as claimed by this website, which is a fake account and has no basis in reality. Thanks for letting us know this was out there, we'll handle it from here!