Future presidents have been pictured with elected presidents before, but this story takes that concept to another level. 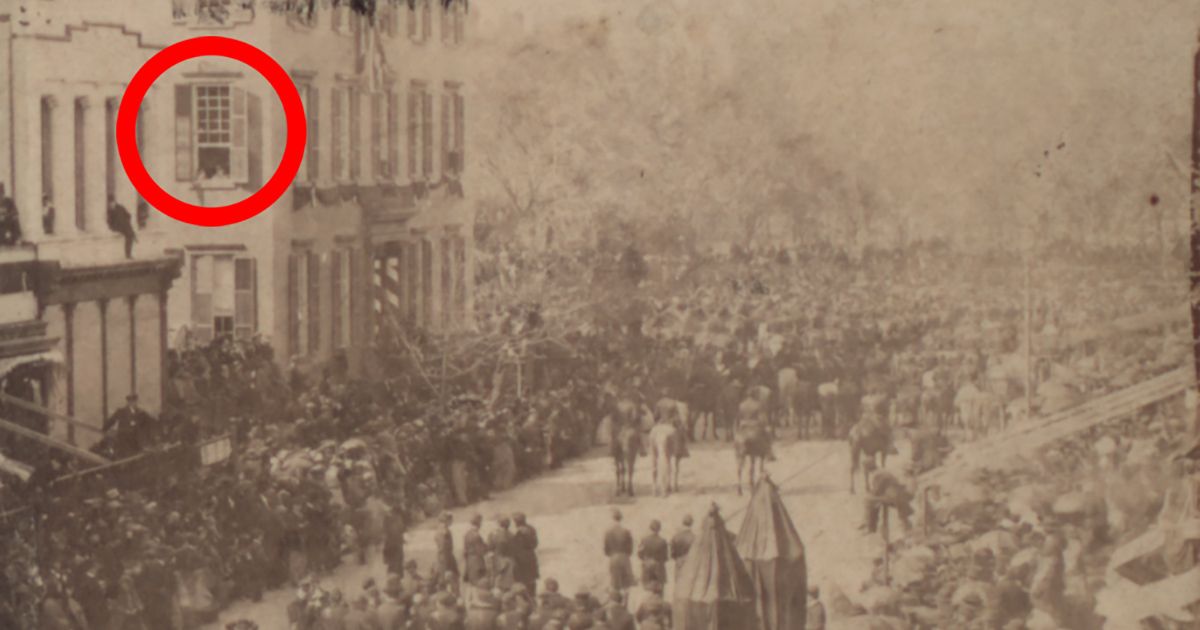 Theodore Roosevelt better known as Teddy was visible in a window in a picture or photo that was taken by a photographer at Abraham Lincoln's funeral procession in New York. (Image Via New York Public Library)
Previous Article
Next Article
Article 9 of 14 in Collection

Claim:
A young Theodore Roosevelt was photographed in a distant window during Abraham Lincoln's funeral procession in New York.
Rating:

On Jan. 23, 2022, a TikTok video purported to show a 6-year-old Theodore Roosevelt, better known as Teddy, visible in a distant window in a photograph of Abraham Lincoln’s funeral procession in New York, in 1865. The procession traveled by train, making a number of stops on the way to burial in his hometown of Springfield, Illinois. Lincoln died on April 15 of that year after being shot the day before by John Wilkes Booth during a performance at Ford's Theatre in Washington, D.C.

While it’s not possible to clearly see the faces of the two little children who were visible in the picture shot on Broadway near Union Square, an eyewitness confirmed that they were Teddy Roosevelt and his brother, Elliott.

Thirty-six years after the photograph was taken, Roosevelt took the presidential oath of office, serving in the White House from 1901-1909.

The picture of Roosevelt with Lincoln’s funeral procession heading north on Broadway in New York was believed to have been shot on April 24, 1865. At the time, 849 Broadway was the home of Roosevelt’s father, Cornelius. Roosevelt and his brother, Elliott, are visible in the second-story window of the four-story mansion on the left. The shadows in the photograph appear to show that the sun is in the west, meaning that it was in the afternoon. (Courtesy: Robert N. Dennis Collection of Stereoscopic Views/New York Public Library)

The New York Public Library’s Digital Collections website hosts a high-quality version of the historic photograph. It was credited to the Robert N. Dennis Collection of Stereoscopic Views. According to the book, "The Lincoln Assassination: Crime & Punishment, Myth & Memory," the name of Roosevelt's father, Theodore Roosevelt Sr., "appears on a list of the Union League members who marched in the procession." It's possible that his sons, Teddy and Elliott, were looking out of the window to try to spot their father. (Thank you to the reader who sent in this information.)

An article from The New York Times that was written by presidential historian Michael Beschloss said that the original glass plate negative appeared to be safeguarded by the New York Historical Society.

At least two other photographs shot from the same angle also exist. For example, this picture shows the shutters closed in the second-story window. The people walking on Broadway also have shorter shadows, likely meaning that the photograph was shot earlier in the day: A third picture shows the shutters in the second-story window slightly open. Judging from the length of the shadows, it’s perhaps likely that this photograph was taken sometime before or after the one that showed Roosevelt and his brother: How We Know It’s Roosevelt

On Feb. 10, 1984, The Boston Globe published how Roosevelt was discovered to be in the photograph that was taken at Lincoln’s funeral procession. According to the newspaper, the discovery was made by a photojournalist named Stefan Lorant:

One of Lorant’s favorite Lincoln picture stories concerns a photograph he found in the files of the New York City Public Library. It shows crowds gathered on the sidewalk watching Lincoln’s funeral procession pass by. When he asked the librarian if he could identify the site, Lorant was told it was Union Square and that the house belonged to Theodore Roosevelt’s grandfather, Van Schaack Roosevelt.

Lorant spotted two little children watching the funeral from a second-floor window. “I asked myself who would grandfather invite to the funeral of President Lincoln,” he recalled. “Could a future president be watching as his predecessor passed by?”

In 1948, Lorant had a chance to interview Theodore Roosevelt’s widow, Edith, in connection with the book, “The Life and Times of Theodore Roosevelt.” “Do you remember whether your husband ever told you he saw Lincoln’s funeral?,” Lorant asked.

“That horrible man,” Mrs. Roosevelt screamed. She went on to explain that she had been 3 or 4 years old at the time and a friend of the Roosevelt children, who told her to come to the house to watch the funeral procession. “All the lamps were covered with black cloth,” she told Lorant. “I got frightened and cried.” Then her future husband, who was not quite and his brother Elliott (father of Eleanor Roosevelt) locked her in a closet. “Mr. Lorant,” the 87-year-old woman cried, “I never saw Lincoln’s funeral.”

Lorant remembers he was so enchanted by the spritely woman that he said, “Mrs. Roosevelt,” if I would be 10 years older, I would propose to you.” “Mr. Lorant,” she replied, “if I were ten years younger, I would accept.” This picture shows Edith Roosevelt, widow of Theodore Roosevelt, as she was photographed on Sept. 16, 1935, in New York. (Courtesy: Bettmann / Contributor)

The former first lady later died in the same year that she confirmed it was Teddy and Elliott in the window. She passed away on Sept. 30, 1948.

Lorant was born in Hungary in 1901 and died in Minnesota in 1997. During his life, he was able to personally locate several original Lincoln photographs that had not yet been known about by the general public.

In 1941, Lorant published a book about Lincoln titled, “Lincoln: His Life in Photographs.” That was followed up in 1952 with “Lincoln: A Picture Story of His Life.”

In sum, it was true that Roosevelt appeared in a distant window in a photograph captured at Lincoln’s funeral procession in New York. The discovery was not made until 1948, when Lorant confirmed the fact with Roosevelt's wife, Edith, right before her death.

On Feb. 10, 2022, we added the mention that Roosevelt's father was said to have been in the funeral procession, meaning that his sons might have been looking out the window to spot him.