Did Teddy Roosevelt Say the 'One Answer to Terrorism' Is a Winchester Rifle?

Roosevelt railed against the revolutionary anarchists of his day, whose violent activities he termed 'a crime against the whole human race.' 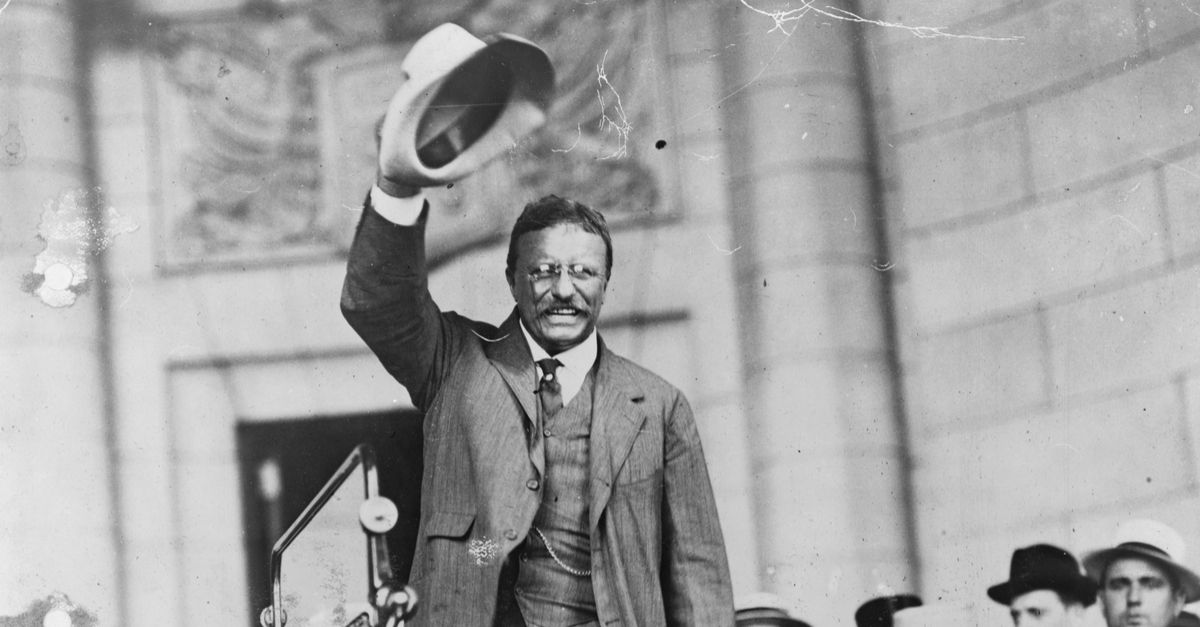 Claim:
Theodore Roosevelt said: "There is but one answer to terrorism and it is best delivered with a Winchester rifle."
Rating:

In an 1887 speech, Theodore Roosevelt said of the bomb-throwing anarchists of his day, "There is but one answer to be made to the dynamite bomb and that can best be made by the Winchester rifle."

Roosevelt did not use the word "terrorism" when he made the remark.

The problem of terrorism may seem uniquely contemporary, but in fact it is nothing new in human history. Violence and terror have always been used to disrupt, appropriate, and hold political power, even before they were combined into an "ism."

It has become commonplace for world leaders to publicly condemn terrorism and vow to eradicate it, despite its elusive persistence. Among the first U.S. presidents to make such a vow, allegedly, was Theodore Roosevelt, who has been credited with saying, "There is but one answer to terrorism and it is best delivered with a Winchester rifle."

The quote has circulated for several years via social media. The earliest instance we found on Twitter was dated 19 December 2016:

"There is but one answer to terrorism, and it is best delivered with a Winchester rifle."--Theodore Roosevelt

If Roosevelt didn't say it, it sure sounds like him — with its combination of tough talk and formal diction, and the flaunting of the made-in-America Winchester rifle ("the gun that won the West") as the proper tool to combat lawlessness. But although it's a reasonable paraphrase of a remark Roosevelt once made, it is not an exact quote, as we'll be able to demonstrate after a brief digression into the history of the phenomenon of terrorism.

The words "terrorism" and "terrorist" were first used to designate the use of violence to create fear in the furtherance of a political aim during the French Revolution, which rapidly devolved into a "Reign of Terror" in which hundreds of thousands of French citizens were imprisoned and/or killed. Facing civil war at home and military threats from abroad, the nascent revolutionary government embarked on a program of "terreur," arresting some 300,000 people accused of counter-revolutionary activities, 17,000 of whom were tried and executed. Another 23,000 were executed without trial or died in prison.

Over time, the label "terrorist" came to be applied to non-state actors who carried out political assassinations, armed uprisings, and public bombings to achieve their goals. Revolutionary anarchist groups of the late 1800s and early 1900s fell into this category. In the U.S., anarchists in the labor union movement were blamed for the Haymarket Square bombing and riot that took place during an otherwise peaceful workers' demonstration in Chicago on 4 May 1886. A dynamite bomb was thrown at police officers attempting to disperse the crowd, setting off a melee that resulted in the deaths of at least 11 people (including seven police officers) and the wounding of dozens more.

On 6 September 1901, U.S. President William McKinley was assassinated by an anarchist, Leon Czolgosz, who said he killed McKinley because "he was an enemy of the people — the good working people," and was not sorry for what he did. McKinley was succeeded by Vice President Theodore Roosevelt, who called the assassination a crime "against the republic and against free government all over the world." According to the Roosevelt Institute for American Studies, it confirmed Roosevelt's long-held view that anarchism was one of the greatest evils of its time:

For Roosevelt the attack confirmed his beliefs that the anarchists as well as their sympathizers should be actively opposed, since the assassination was executed by an anarchist. He held all anarchists and sympathizers responsible for crimes of this kind. This conviction led to a strict immigration policy to prevent anarchist ideas from spreading and to protect the labor market by excluding 'unhealthy' immigrants.

As president, Roosevelt devoted his first message to Congress to condemning anarchism in the strongest possible terms:

The anarchist, and especially the anarchist in the United States, is merely one type of criminal, more dangerous than any other because he represents the same depravity in a greater degree. The man who advocates anarchy directly or indirectly, in any shape or fashion, or the man who apologizes for anarchists and their deeds, makes himself morally accessory to murder before the fact. The anarchist is a criminal whose perverted instincts lead him to prefer confusion and chaos to the most beneficent form of social order. His protest of concern for workingmen is outrageous in its impudent falsity; for if the political institutions of this country do not afford opportunity to every honest and intelligent son of toil, then the door of hope is forever closed against him. The anarchist is everywhere not merely the enemy of system and of progress, but the deadly foe of liberty. If ever anarchy is triumphant, its triumph will last for but one red moment, to be succeeded for ages by the gloomy night of despotism.

In essence, Roosevelt was condemning terrorists and acts of terrorism, although he didn't use those words. Nor was this a new crusade for him — and here we return to the attributed quote with which we started. Fourteen years before McKinley was assassinated, in a speech Roosevelt gave as a private citizen before the Federal Club of New York City, he alluded to the then-recent Haymarket bombing in Chicago and the threat of anarchist violence in general when he said, "There is but one answer to be made to the dynamite bomb and that can best be made by the Winchester rifle."

A number of contemporaneous press reports took note of the offhand remark. The St. Johnsbury Republican of Vermont even included some context:

Comparing the labor vote of New York, Chicago and Cincinnati, Mr. Roosevelt parenthetically remarked that there was but one answer to be made to the dynamite bomb, and that could best be made by the Winchester rifle. The Anarchist and the Socialist had no place in American politics. Thugs and assassins might have a significance in society, but not as partisans.

It's fair to say that Roosevelt was speaking of terrorism, even if he didn't utter the word. It's also fair to say that Roosevelt was advocating the use of deadly force (in the form of a Winchester rifle) as the only adequate response to terrorist violence. On that basis, we rate the claim that he said "There is but one answer to terrorism and it is best delivered with a Winchester rifle" mostly true.