Did Ronald Reagan Always Wear a Jacket in the Oval Office? 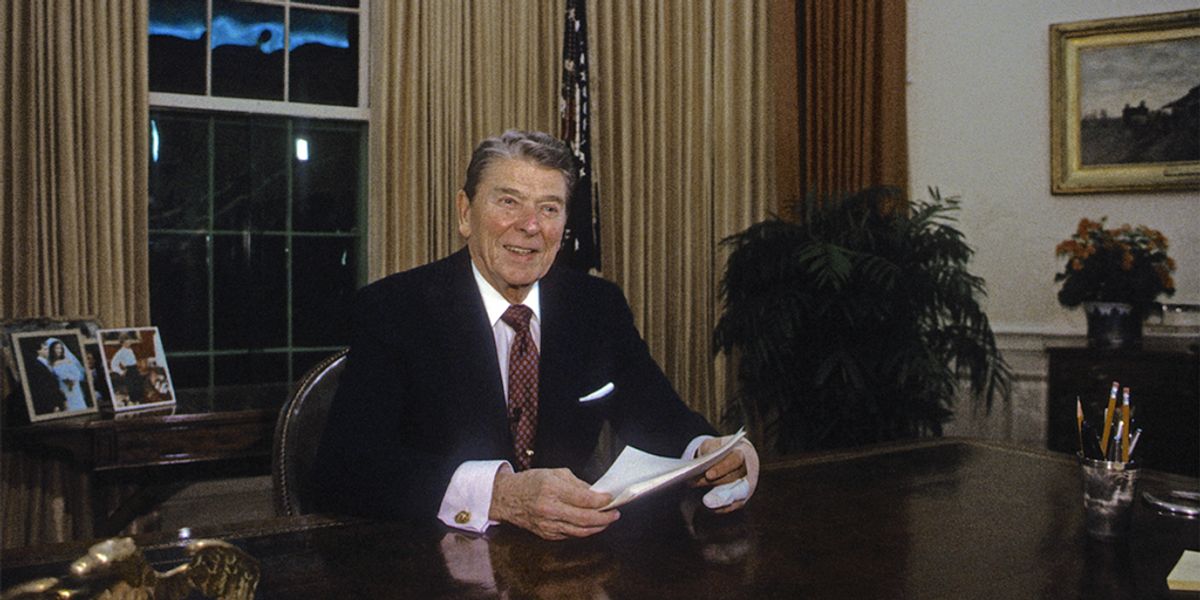 Claim:
Ronald Reagan never occupied the Oval Office without a jacket on.
Rating:

Former Starbucks CEO Howard Schultz appeared on MSNBC's "Morning Joe" program on 30 January 2019 to talk about his potential candidacy for the U.S. presidency. When co-host Mika Brzezinski asked Schultz to name his favorite Republican president from the last 50 years, Schultz responded with an anecdote about President Ronald Reagan.

Schultz's reply can be glimpsed around the 11:45 mark of the following video. We've transcribed the relevant portion below:

Howard Schultz was hardly the first person to state the idea that President Reagan never entered the Oval Office without a suit jacket or removed it once there. In 2011, for instance, Ken Langone, the co-founder of Home Depot, invoked this notion to criticize President Barack Obama for being "unpresidential":

"He is dividing us as a nation. He's not bringing us together. He's willfully dividing us. He's petulant."

"Ronald Reagan would never go into the Oval Office without his jacket on -- that's how much he revered the presidency. This guy worked like hell to be president ... Behave like a president. Let me look at you as a model to how we should behave. What does he say? Fat cats, jet airplanes. What is the purpose? Us versus them."

We searched the photo galleries of the Ronald Reagan Library to see if we could turn up any images of President Reagan in the Oval Office clothed in informal attire. The vast majority of photographs we encountered of him in the Oval Office did indeed capture him in a tie and jacket -- but that wasn't always the case, so employing the absolute term "never" in reference to his sartorial habit is not accurate:

A similar claim has been made about the Oval Office attire of President George W. Bush. A 2009 article published in the New York Times criticized Barack Obama for unbuttoning the formal dress code at the White House and stated that Bush had an "ironclad rule" about the wearing of coats and ties in the Oval Office at all times:

Thus did an ironclad rule of the George W. Bush administration — coat and tie in the Oval Office at all times — fall by the wayside, only the first of many signs that a more informal culture is growing up in the White House under new management. Mr. Obama promised to bring change to Washington and he has — not just in substance, but in presidential style.

Again, however, this "ironclad rule" wasn't exactly so ironclad. While President Bush may have worn a coat and tie during most of the time he occupied the Oval Office, the term "at all times" isn't accurate: