Did Ronald Reagan Pave the Way for Fox News?

A Facebook meme gets some facts right about the demise of the Fairness Doctrine but ignores important distinctions between broadcast and cable television. 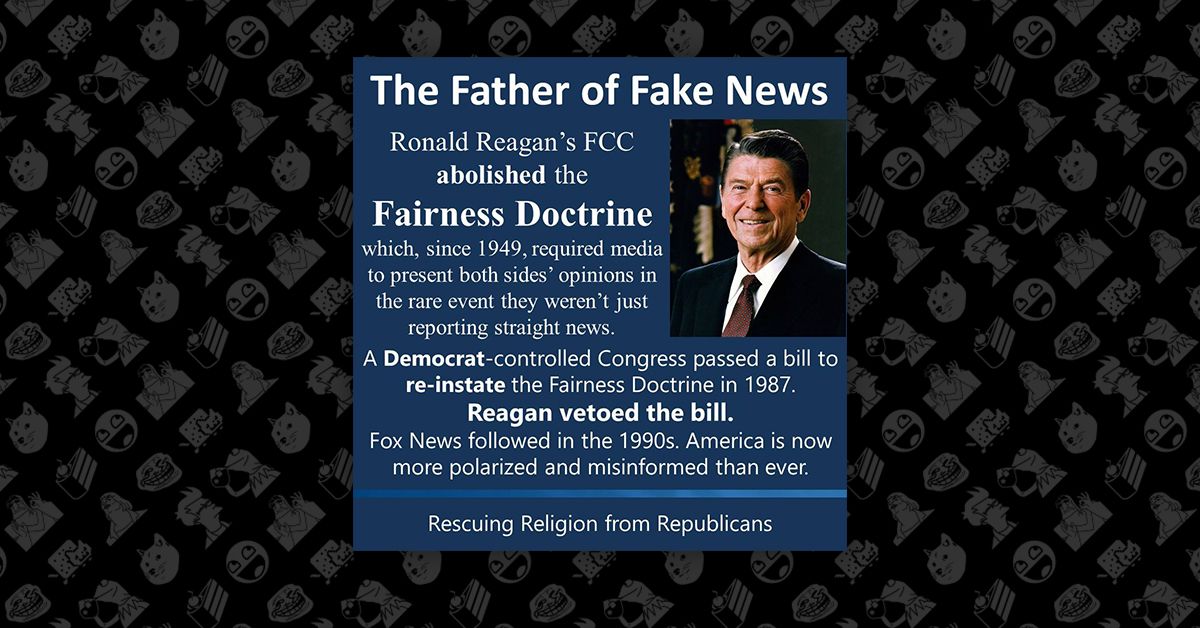 The FCC did abandon the Fairness Doctrine under the Reagan administration in 1987.

The Fairness Doctrine applied only to broadcast licensees, and as a cable television channel, Fox News would in all likelihood never have been constrained by the doctrine's requirement to present a range of viewpoints on every issue.

Political polarization in the news media is a growing concern for Americans, one that liberals often blame on the conservative movement, with the rise of right-wing talk radio and Fox News over recent decades.

Case in point, the Christian Left Facebook page posted an interesting set of claims about Ronald Reagan in January 2017, in the form of a meme that has been widely shared over the past couple years.

The Father of Fake News

Ronald Reagan's FCC abolished the Fairness Doctrine which, since 1949, required media to present both sides' opinions in the rare event they weren't just reporting straight news. A Democrat-controlled Congress passed a bill to re-instate the Fairness Doctrine in 1987. Reagan vetoed the bill.

Fox News followed in the 1990s. America is now more polarized and misinformed than ever. The meme was originally created by K. Scott Schaeffer, a self-described "moderate Democrat" and "theologically-moderate Christian" who runs the Rescuing Religion from Republicans Facebook page.

Much of the account in the meme is accurate, but it leaves out important distinctions between broadcast and cable television, and is ultimately misleading in claiming that the demise of the Fairness Doctrine cleared a path for the creation of Fox News.

In 1949, the Federal Communications Commission (FCC) published a report that recommended what came to be known as the "Fairness Doctrine." As explained by the Congressional Research Service, the doctrine "consisted of two basic requirements" for anyone given a TV or radio broadcast license:

(1) that every licensee devote a reasonable portion of broadcast time to the discussion and consideration of controversial issues of public importance; and

(2) that in doing so, [the broadcaster must be] fair – that is, [the broadcaster] must affirmatively endeavor to make ... facilities available for the expression of contrasting viewpoints held by responsible elements with respect to the controversial issues presented.

And there were additional requirements, under the Fairness Doctrine:

Part of the rationale behind the doctrine was the scarcity of television and radio frequencies available, especially in the middle of the 20th century. The government had a duty to regulate the operation of scarce frequencies, the argument went, and therefore had a right to use the public interest as the main criterion in granting and renewing broadcast licenses.

And because so few companies licensed a frequency, it was important to ensure that the viewing and listening public were exposed to a wide variety of viewpoints on important issues.

However, the rise of cable and satellite television channels like CNN and HBO, especially in the 1980s, changed the American broadcasting landscape.

Traditionally, broadcast (or "terrestrial") television involved the distribution of content between broadcast towers and household antennas or tuners, on particular frequencies. For several decades up to the 1980s, television was dominated by the "big three" networks — ABC, CBS and NBC — which were free to watch.

These new methods of distribution undermined the "scarcity" principle that underpinned the Fairness Doctrine. Cable and satellite television offered a new, wider range of programming and viewpoints and later, so did the internet.

They did not ensure heterogeneity or a universally open "marketplace of ideas," though. Exposure to cable and satellite television was confined to those who could afford to pay for it. Those who could not were still limited to the broadcast networks.

By 1987, amid growing criticism, Reagan's FCC came to believe the Fairness Doctrine should be abandoned, because it believed that "the doctrine chilled the speech of broadcasters and inhibited free and open debate on the public airwaves," as the Congressional Research Service put it.

In an effort to pre-empt such a repeal, Democratic Senator Fritz Hollings introduced the Fairness in Broadcasting Act in March 1987, which would have fully enshrined the Fairness Doctrine in law. The Senate was split 55-45 in favor of the Democrats at the time, and the bill passed the Senate by 59-31. A similar bill was passed by 302 votes to 102 in the Democrat-controlled House in June, but President Reagan vetoed it.

The Facebook meme is somewhat muddled when it comes to the sequence of events, here. The vote in Congress was not an attempt to "re-instate" the Fairness Doctrine, it was a pre-emptive effort to fully codify the existing doctrine before the FCC could abolish it later in 1987 (which it duly did.)

Likewise, Reagan's veto did not prevent the re-instatement of the doctrine, it prevented the doctrine from being fully codified.

In August 1987, the FCC put an end to the Fairness Doctrine by a unanimous vote.

But did the the abandonment of the Fairness Doctrine clear the way for Fox News, as the meme implies? Not really.

As we've outlined, the Fairness Doctrine applied to broadcast licensees. Fox News is a cable TV channel which launched in 1996. The distinction between broadcast and cable TV is crucial, here. As the Congressional Research Service wrote:

It does not appear that the Fairness Doctrine may be applied constitutionally to cable or satellite service providers. The Supreme Court has held that content-based restrictions on the speech of cable and satellite providers are subject to strict scrutiny.

So even if the Fairness Doctrine had persisted until the era of Fox News, the FCC would, in all likelihood, have been restricted to regulating the content of public broadcasters, leaving Fox News to its own devices, like hundreds of other cable and satellite channels.