Did Ronald Reagan Warn Against 'Demagogues' Willing to Declare a Trade War Against America's Friends?

During a 1988 radio address, President Reagan railed against those calling for trade tariffs and derided protectionism as "a cheap form of nationalism." 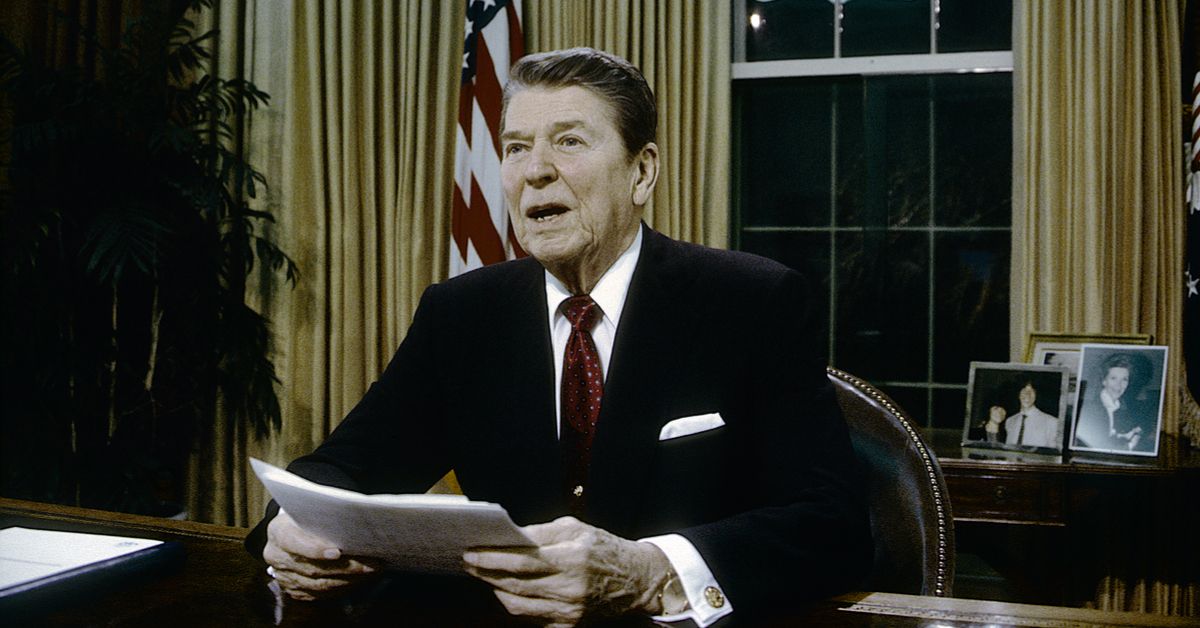 Claim:
President Reagan warned the public against demagogues who advocated a trade war against America's friendly trading partners in the name of protectionism.
Rating:

The move prompted swift opposition at home, including by some in the president's own party who warned of the deleterious effects of a trade war between the U.S. and its allies. Within days of Trump's announcement, Canada, Mexico, and the EU vowed retaliatory tariffs on American products.

Among the rhetorical weapons brandished by opponents of the tariffs was a quote attributed to President Ronald Reagan, a conservative icon, inveighing against trade protectionism and labeling those who defended instigating trade wars with friendly countries "demagogues":

Ronald Reagan: "We should beware of the demagogues who are ready to declare a trade war against our friends—weakening our economy, our national security, and the entire free world—all while cynically waving the American flag." pic.twitter.com/jZIWIuBxjW

Our search for the provenance of the quote led us to a radio address delivered by Reagan (one of his last as president) on 26 November 1988. In it, he referred to protectionism as "a cheap form of nationalism" and told Americans that "[o]ur peaceful trading partners are not our enemies; they are our allies."

This is a partial transcript:

In recent years, the trade deficit led some misguided politicians to call for protectionism, warning that otherwise we would lose jobs. But they were wrong again. In fact, the United States not only didn't lose jobs, we created more jobs than all the countries of Western Europe, Canada, and Japan combined. The record is clear that when America's total trade has increased, American jobs have also increased. And when our total trade has declined, so have the number of jobs.

Part of the difficulty in accepting the good news about trade is in our words. We too often talk about trade while using the vocabulary of war. In war, for one side to win, the other must lose. But commerce is not warfare. Trade is an economic alliance that benefits both countries. There are no losers, only winners. And trade helps strengthen the free world.

Yet today protectionism is being used by some American politicians as a cheap form of nationalism, a fig leaf for those unwilling to maintain America's military strength and who lack the resolve to stand up to real enemies — countries that would use violence against us or our allies. Our peaceful trading partners are not our enemies; they are our allies. We should beware of the demagogues who are ready to declare a trade war against our friends — weakening our economy, our national security, and the entire free world — all while cynically waving the American flag. The expansion of the international economy is not a foreign invasion; it is an American triumph, one we worked hard to achieve, and something central to our vision of a peaceful and prosperous world of freedom.


In contrast to Trump's America-first populism, Reagan's view of international relations was founded on the assumption that free and open trade between partner nations was to the mutual benefit of all concerned.

"I, like you, recognize the inescapable conclusion that all of history has taught," he told a gathering of business and trade leaders in 1985. "The freer the flow of world trade, the stronger the tides for human progress and peace among nations."

That having been said, Reagan's view was more subtle than it appears at first glance. Like Trump, he recognized and affirmed that free and fair trade among nations requires a commitment by all parties to abide by the rules:

Nor was Reagan averse to mild protectionist gestures when the political environment required them. As Daniel Griswold, a former director of trade policy studies at the Cato Institute, wrote in 2004:

Like most post-war presidents, Reagan championed free trade while selectively deviating from it. Critics of trade note correctly that Reagan negotiated “voluntary” import quotas for steel and Japanese cars and imposed Section 201 tariffs on imported motorcycles to protect Harley-Davidson. All true. But those were the exceptions and not the rule. They were tactical retreats designed to defuse rising protectionists pressures in Congress.

Despite their overlapping concerns about the threat posed by unfair trade practices, one of the main things that set Reagan's modus operandi apart from Trump's was the former's refusal to engage in trade war brinkmanship as a negotiating tool.

History will decide which is the more fruitful approach.

Pramuk, Jacob, Javers, Eamon, and Reid, David.  "Trump Administration Will Put Steel and Aluminum Tariffs on Canada, Mexico and the EU."   CNBC.  31 May 2018.

Ronald Reagan Presidential Library and Museum.  "Radio Address to the Nation on the Canadian Elections and Free Trade."   26 September 1988.