Ron Howard Didn't Say That the 1969 Moon Landing Was Fake

A YouTube conspiracy theory video claims that a clip from "Arrested Development" proves that the 1969 moon landing was staged. 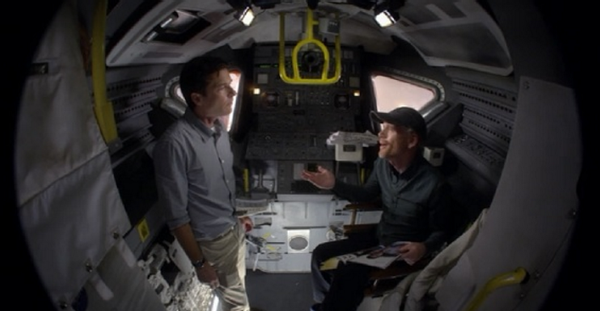 Claim:
A clip from the show 'Arrested Development' featuring Ron Howard is proof that the 1969 moon landing was fake.
Rating:

On 26 March 2016, a video attempting to prove that the 1969 moon landing was a hoax was uploaded to YouTube by "RussianVids." The main piece of "evidence" from this video is a clip from a season four episode of Arrested Development entitled "The B. Team" featuring actors Ron Howard and Jason Bateman.

Howard: Let's go inside the lem.

Batemen: Wow is this the one that landing on the moon?

Hward: On a sound stage.

Howard: No from 1969. I'll tell you about it inside the lem. It's sound proof in there. And it's a national secret. So, NASA did go to the moon in 1971. That one was real. But in 69, they weren't ready. So they faked the whole thing on the sound stage of Gentle Ben.

The narrator of the conspiracy theory acknowledges that the footage he is using comes from a scripted television show, but adds that Ron Howard is purposefully "mixing truth with lies" in order to convince the "sheep" that man has never been to the moon.

The logic appears to go like this: Ron Howard lies about the 1971 moon landing being real in order to gain the interest of the "sheep." Once they are paying attention, he tells "the truth" about the 1969 moon landing (i.e. that it was a hoax). Why Ron Howard chose to insert this information into an episode of Arrested Development is not explained.

While moon landing conspiracy theorists have used a wide range of sources in an attempt to prove that the 1969 moon landing was a hoax, the choice to include Ron Howard is exceptionally odd due to the director's affinity for astronauts, NASA, and space travel. In addition to directing Apollo 13, Ron Howard was also involved with a documentary about the Apollo missions called "In the Shadow of the Moon."  That documentary ended with several Apollo of astronauts addressing claims that the moon landings were faked:

Charlie Duke: “We’ve been to the moon nine times. If we faked it, why did we fake it nine times?”

Mike Collins: “I don’t know two Americans who could have a fantastic secret without one of them blurting it out to the press. Can you imagine thousands of people being able to keep this secret?”

Previously, conspiracy theorists uncovered "long-lost evidence" of Stanley Kubrick admitting that he had helped fake the moon landings (which later turned out, unsurprisingly, to be a hoax).