Were Votes Switched from Romney to Obama in 2012?

U.S. President Donald Trump has been stoking fear about voter fraud for years. 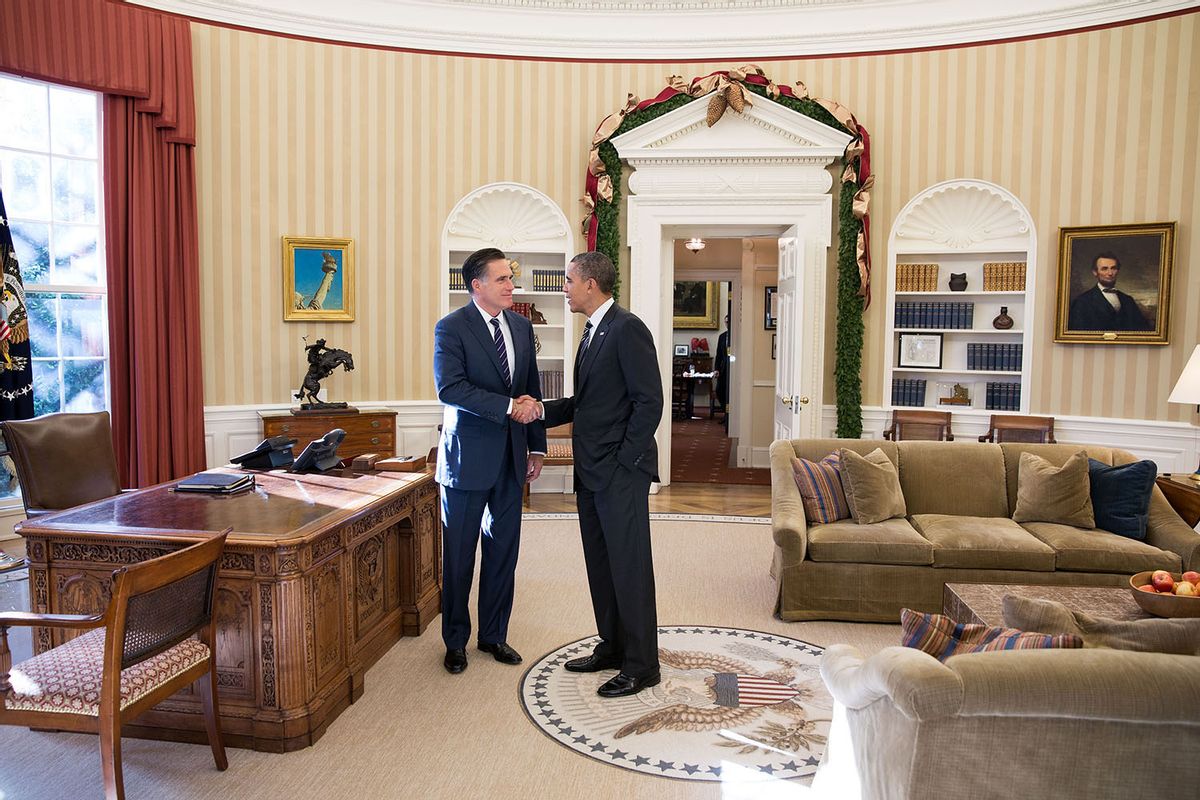 Claim:
Votes cast for Mitt Romney during the 2012 election were switched to President Barack Obama.
Rating:

On Nov. 18, 2020, as U.S. President Donald Trump continued to spread unfounded claims about voter fraud in the presidential election — including the debunked claim that Dominion Voting Systems had switched more than 200,000 votes for Trump to votes for Joe Biden — the president resurfaced a seemingly prescient tweet he originally posted during the 2012 election between President Barack Obama and Sen. Mitt Romney.

Trump, who has so far refused to concede defeat to Biden as of this writing, appears to be bringing attention to this 2012 message as a way to claim that he has always known about widespread voter fraud. However, when we take a closer look at the "reports" Trump is referring to in this message, we see that this tweet actually shows how Trump has been exaggerating the threat of voter fraud for years.

Unlike Trump's false claim in 2020 that computer software was used to switch hundreds of thousands of votes for himself to favor his political opponent, the reports during the 2012 election were both more benign and at least somewhat based in reality. None of the reports in 2012 concerned a widespread voter fraud effort, nor were these reports based on a piece of software that was switching ballots after they were cast. Rather, all of the reports from 2012 that we could find dealt with voters who experienced problems while casting their votes on miscalibrated touch screens.

North Carolina's Fox 8, for example, reported that when some voters in the state selected Romney for president, the election machine showed a selection for Obama. While this may have been frustrating, it should be noted that all of these voters ultimately got to cast their vote for the candidate of their choice and that election officials recalibrated the machines that were found to be malfunctioning.

One of the voters, Sher Coromalis, says she cast her ballot for Governor Mitt Romney, but every time she entered her vote the machine defaulted to President Obama.

“I was so upset that this could happen,” said Coromalis.

Guilford County Board of Elections Director George Gilbert says the problem arises every election. It can be resolved after the machine is re-calibrated by poll workers.

“It’s not a conspiracy it’s just a machine that needs to be corrected,” Gilbert said.

After the third try, Coromalis says she was able to get her vote counted for Gov. Romney but was still annoyed.

A similar problem arose in North Carolina when a voter reported that they tried to select Romney for president but the machine registered a vote for Obama. Again, this voter ultimately cast their ballot for the candidate of their choice and the machine was taken out of service to be recalibrated. The Marion Star reported that "it took [voter] three tries before her selection was accurately recorded."

Obama supporters, too, had some trouble at the polls. A viral video showed a voter attempting to select Obama for president only to have their vote changed to Romney. Again, this person ultimately got to cast their vote for the candidate of their choice and the machine was serviced.

A Pennsylvania electronic voting machine was taken out of service after being captured on video changing a vote for President Obama into one for Mitt Romney, NBC News has confirmed. Republicans have also said machines have turned Romney votes into Obama ones.

Rich Gardella and Ellie Hall of NBC News have spoken to the voter who recorded the video. He told them he was eventually able to register his vote for Obama by finding the one area of the screen where the vote would be recorded. When he told the poll worker, she replied that there was therefore "no problem."

The 2012 election saw a handful of reports about voting machines that temporarily marked Romney votes as Obama votes as well as Obama votes for Romney votes. These problems were all connected to poorly calibrated touch screens, not widespread voter fraud efforts, and all of the voters in the aforementioned reports ultimately got to cast their ballots for the candidate of their choice.

Interestingly, erroneous claims of "vote switching" weren't the only ones to pop up during the 2012 and 2020 elections. The 2012 election also saw false rumors about the number of votes exceeding the number of voters, a false rumor that has also been widely circulated in 2020.