Is a Robot Bodyguard Protecting the King of Bahrain?

This robot is equipped with sarcasm, not machine guns. 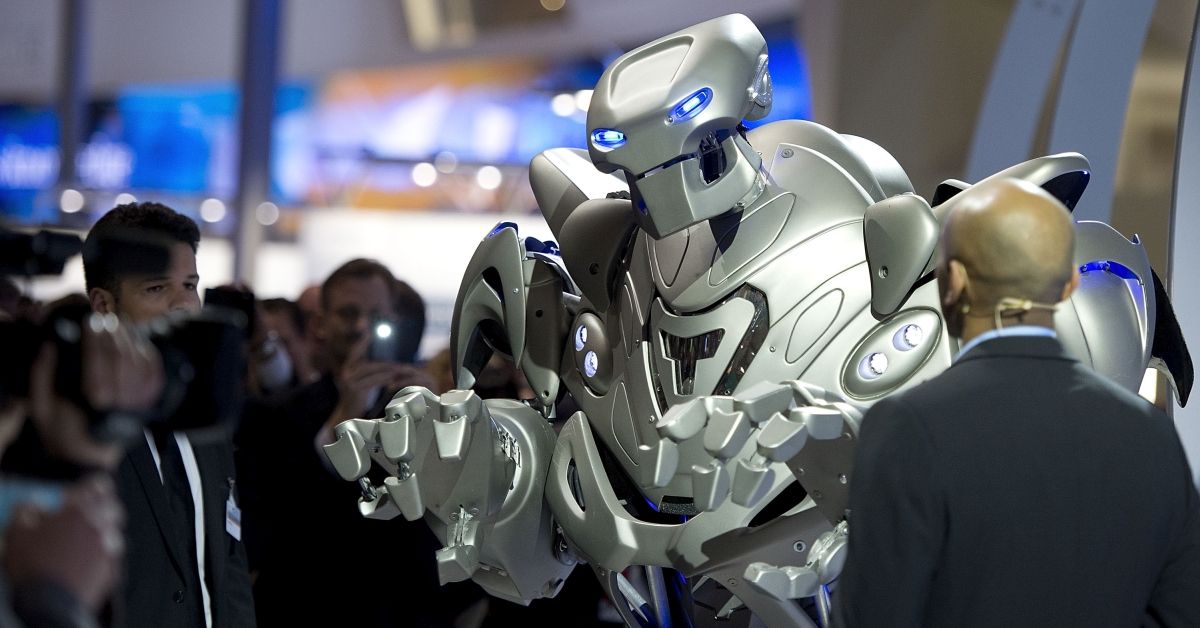 Claim:
A video shows a robot bodyguard protecting the king of Bahrain.
Rating:

In January 2022, a video supposedly showing a robot bodyguard protecting the king of Bahrain was re-circulated on social media:

This video was often accompanied by a piece of text that supposedly described the robot bodyguard's abilities. One iteration posted to Facebook claimed that it spoke six languages and was armed with an electric taser, three hidden machine guns (with enough ammo to fight 1,000 people), a "laser guided sniper machine gun," a 360-degree camera, an infrared camera, medical supplies, and water. According to this post, the robot cost over $7 million.

While the above-displayed video is real, it does not show a robotic bodyguard, let alone one equipped with a "laser guided sniper machine gun" protecting the king of Bahrain.

This video was filmed at Abu Dhabi's International Defense Exhibition in 2019 and shows Titan, an 8-foot-tall robot developed by the British company Cyberstein Robots. While Titan may be intimidating, this robot isn't a "bodyguard." It's an entertainment robot that was at the conference primarily to entertain attendees.

The greeter at Abu Dhabi's International Defence Exhibition is making a buzz on social media, as nobody expected to meet a bilingual, eight feet tall robot ... While nations were signing contracts and millions of dollar were spent behind closed doors, the greeter at Idex brought a lighter side to the exhibition.

Here's another video of Titan at this exhibition.

Titan made its debut in 2004 when the robot appeared onstage with Rihanna at the Glastonbury Music & Arts Festival. Since then, the robot has appeared alongside A-list celebrities, such as Will Smith, Jackie Chan, and Hugh Jackman, and has made numerous appearances on talk shows and tech conferences.

Titan has gone through several revisions since then. Nick Fielding, the creator of Titan, said that Titan really took off after working with voiceover artists to create custom dialogue for the robot. Not only does this allow the company to customize Titan's script per event, but dialogue can be recorded in a variety of languages. Fielding said:

"One of the biggest developments within our company was when we started working with a very well-known TV voiceover artist. He now voices all of Titan's dialogue. He has given Titan a character and a wisecracking wit that has taken our show to a whole new level ... We can now produce scripts and bespoke dialogue for Titan. He can give seminar speeches, product demonstrations or promotional videos etc. In fact, the only thing that limits what we can do these days is the client's imagination."

Here's a video of Titan sarcastically interacting with a crowd at the Bett Exhibition in 2020:

Dheeshma , Puzhakkal. "Fact Check: This Is Not King of Bahrain Arriving in Dubai with His Automaton Bodyguard." India Today, https://www.indiatoday.in/fact-check/story/fact-check-not-king-bahrain-in-dubai-automaton-bodyguard-1712063-2020-08-17. Accessed 14 Jan. 2022.