Is This a Real Lineup of Speakers at the Republican National Convention?

Kid Rock, “MyPillow Guy,” and “MAGA hat kid” were just a few of the speakers rumored to be lined up for the 2020 GOP convention, according to a meme. 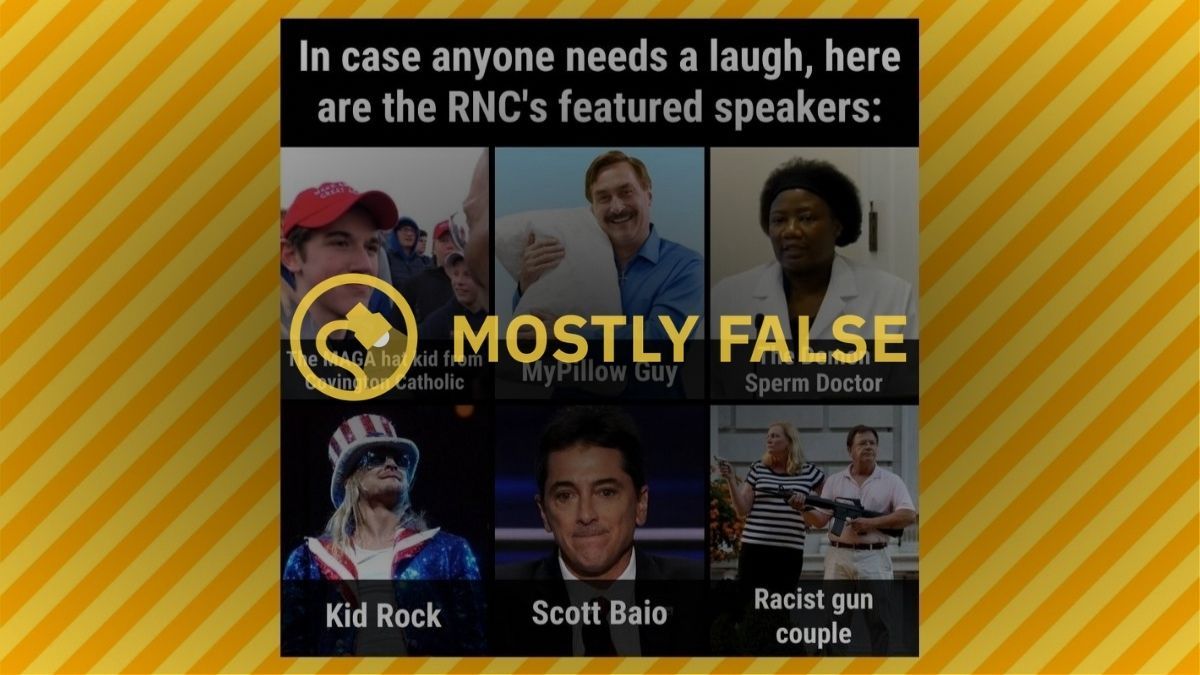 Claim:
A meme accurately lists six of the speakers scheduled to appear at the Republican National Convention in August 2020.
Rating:

Dr. Stella Immanuel, Scott Baio, Kid Rock, and Mike Lindell are not on the official list of RNC speakers.

The list of featured speakers at the 2020 Republican National Convention (RNC) was announced on Aug. 23, as the party ramped up for the November presidential election in which their candidate, incumbent U.S. President Donald Trump, would face off against Democratic presidential nominee Joe Biden.

Before the official announcement was made, a meme (see above) began circulating on Facebook highlighting a supposed list of featured speakers ranging from the absurd to the plausible. The meme included names of people who have gained prominence over the past few years for their connection to right-wing movements and conspiracy theories.

We went through the real list — available here — and learned that only a few of these people are actually going to speak at the RNC, which begins on Monday, Aug. 24.

Firstly, the student often described as "the MAGA hat kid from Covington Catholic” will indeed be speaking at the second day of the convention. Nicholas Sandmann was a high school student at the center of a viral video from early 2019. In the video, Sandmann was wearing a Make America Great Again hat and was in Washington, D.C., for the March for Life rally. The video appeared to show him staring down a Native American activist who played a drum. Mainstream and social media commentators accused Sandmann of harassing the activist, but a longer version of that video contradicted the notion. Sandmann sued CNN and The Washington Post for defamation surrounding their coverage of the incident, in cases that were later settled for undisclosed amounts.

Next up is Mike Lindell, the CEO of MyPillow, a pillow manufacturing company, and Trump’s friend. He has been promoting oleandrin, a toxic botanical extract, as a treatment for COVID-19, despite a lack of proof that it works. He does not appear to be on the speaker’s list, though he will be speaking at a Republican fundraiser in September. (Update: Though he was not a featured speaker, Lindell did speak briefly during the roll call portion of the convention.)

Third on the list is Dr. Stella Immanuel, nicknamed “The Demon Sperm Doctor” in the meme. Immanuel gained notoriety after Trump himself pushed her theories that face masks were not necessary to stop the spread of COVID-19. She has also said that a range of medical issues usually occurring in women are caused by demonic sperm after having sex with demons. She is not speaking at the convention.

Actor Scott Baio spoke at the 2016 RNC, while musician Kid Rock was being considered for a performance at this year's convention before the pandemic struck in 2020. Neither appear to be on the official speaker’s list for 2020.

Finally, Mark and Patricia McCloskey (dubbed "the racist gun couple” in the meme) are, in fact, speaking on the first day of the RNC. The duo brandished their firearms at Black Lives Matter protesters in St. Louis in June 2020 in the wake of police custody deaths of Black men that resulted in nationwide demonstrations.

Only three people — including a couple — named in this meme will actually be speaking at the RNC. As such, we rate this claim "Mostly False."