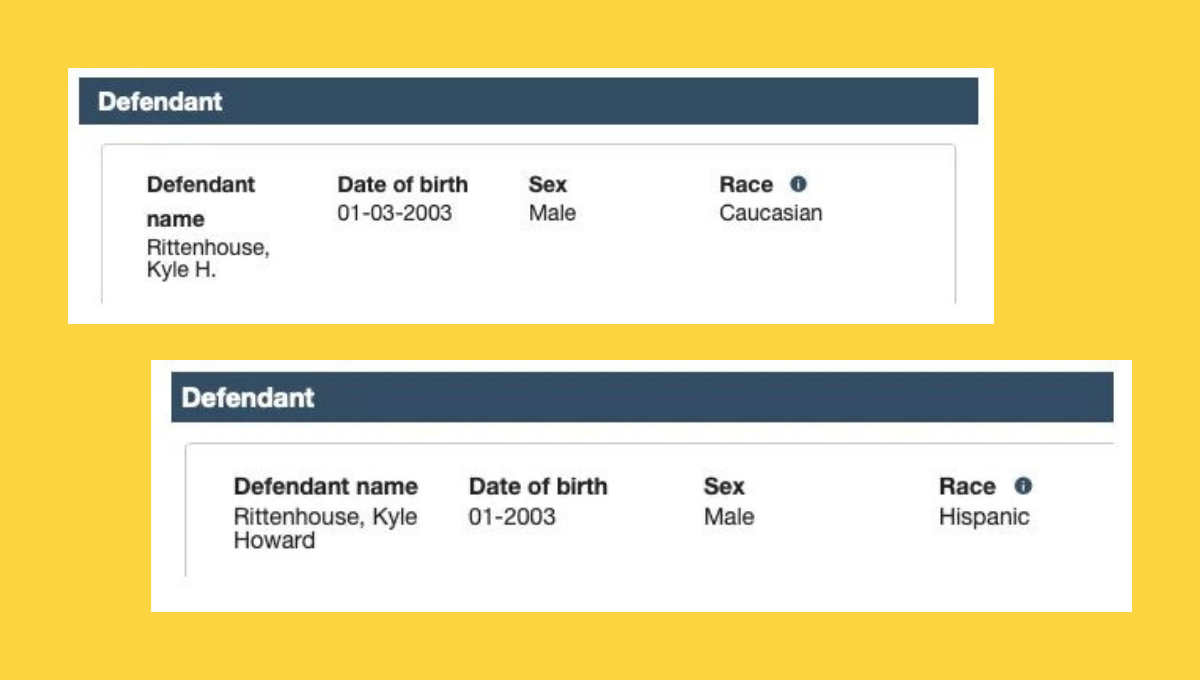 Claim:
Separate Wisconsin court case records each listed a different race for Kyle Rittenhouse, the 18-year-old who is accused of killing two people at a Kenosha protest in summer 2020. One lists him as "Caucasian," the other as "Hispanic."
Rating:

Since Kyle Rittenhouse, 18, allegedly opened fire with an AR-15-style rifle at a protest against police brutality in Kenosha, Wisconsin, in summer 2020 — killing two people and wounding a third person — rumors about him have dominated segments of social media.

For example, in an attempt to justify his actions, some people called attention to his identity and the race of his victims.

"Having a gun is what allowed hispanic Kyle Rittenhouse to defend himself from three white attackers," one person tweeted.

Some of those posts included screenshots purportedly showing details of unrelated court cases involving Rittenhouse and listing "Hispanic" for his race.

First, we reached out to attorneys representing Rittenhouse to see how he identifies. We have not received an answer, but we will update this report when, or if, we do.

Next, we used Wisconsin's online search database of court records to find all instances in which law enforcement cited Rittenhouse for breaking the law.

Based on that search, Rittenhouse faced multiple felony counts, including reckless homicide and reckless endangerment, for his actions at the Kenosha demonstration. That case, which remained ongoing at the time of this writing, included the below-displayed description of him:

Additionally, the database showed law enforcement officers pulled Rittenhouse over about one week earlier, on Aug. 19, and cited him for driving without a valid license and going about 20 mph over the speed limit. He accepted those charges based on that case's records, which indeed identified him like this:

In other words, it was true that, in two separate cases, Wisconsin court records listed Rittenhouse's race differently -- one record (regarding the homicide accusations) described him as white, and another (listing two violations during a traffic stop) said he was Hispanic.

The reason for the discrepancy was unknown. The database included the following disclaimer: "This designation listed in the race field is subjective. It is provided to the court by the agency that filed the case."

Considering that information, we reached out to Kenosha law enforcement officials to learn how authorities determine defendants' race for court records and why deputies listed Rittenhouse as "Hispanic" in mid-August and "white" roughly one week later.

Lt. Joseph Nosalik, of the Kenosha Police Department, responded to us, saying his agency's records list Rittenhouse as a "white male."

We also attempted to contact Wisconsin court administrators, including representatives for the Kenosha County clerk, with no success.

Meanwhile, multiple reputable news outlets (such as The Associated Press and Reuters) reported Rittenhouse was white. No evidence other than the above-displayed record pertaining to the Aug. 19 traffic stop — which, as we noted, carried a disclaimer that law enforcement noted "Hispanic" based on a subjective look at Rittenhouse and was not a self assessment — indicated that the 18-year-old was possibly any race other than Caucasian. For those reasons, we also rated previous claims calling him white "True."