Did Police in Riot Gear Disrupt a Violin Vigil for Elijah McClain?

Video footage recorded at a vigil for Elijah McClain in Aurora, Colorado, caused widespread concern in June and July 2020. 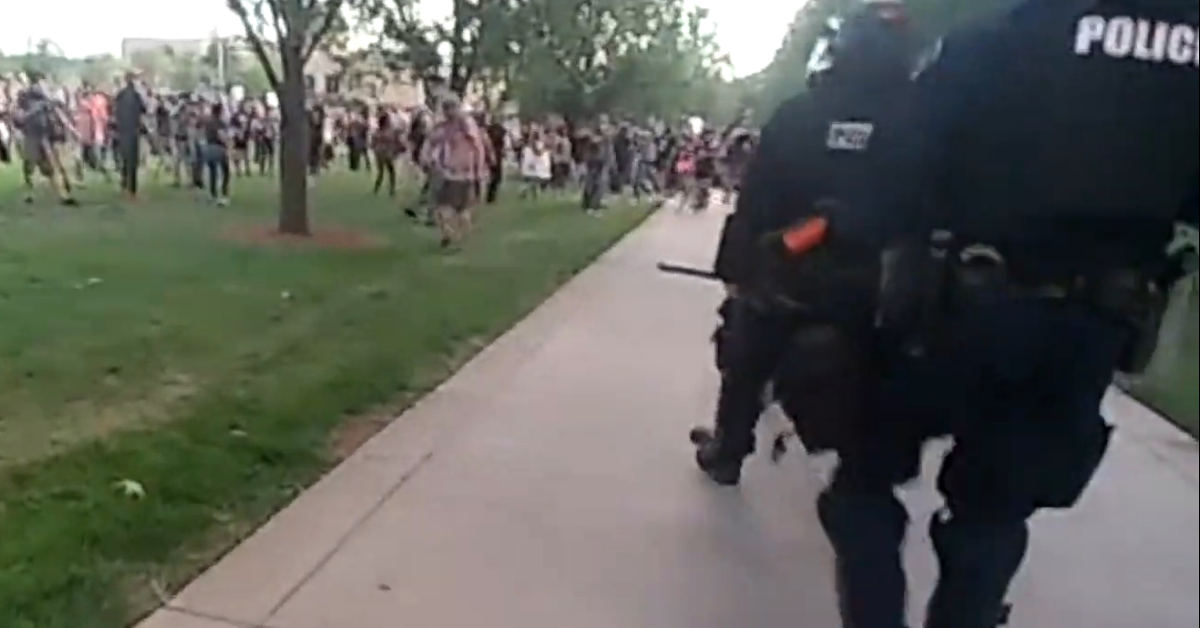 Police in riot gear arrived at a violin vigil, intimidating and frightening peaceful protesters and children, and partially disrupting the vigil.

The police involved were attempting to move on a different cohort of protesters who had failed to obey a dispersal order at an adjacent location. According to Aurora police, the officers' intent was to protect those attending the vigil, rather than to intimidate them, or disrupt the vigil.

In late June and early July 2020, we received multiple inquiries from readers about the accuracy of alarming news reports and social media posts claiming police in the city of Aurora, Colorado had worn "riot gear" and used pepper spray when confronting protesters at a peaceful rally held in response to the death of Elijah McClain, a young Black man who died after being detained by police in August 2019.

McClain was himself a keen violinist, and organizers of the June 27, 2020, demonstration called upon "violin players and bowed instruments" to play at the event, in order to honor his memory. Amid ongoing, nationwide protests against racism and police brutality in the wake of George Floyd's death in police custody a month earlier, Colorado Gov. Jared Polis had just reopened an investigation into the circumstances of McClain's death.

On June 30, the website Upworthy published an article with the headline "Police in Full Riot Gear Storm Peaceful 'Violin Vigil' for Elijah McClain With Pepper Spray." The left-leaning Facebook page "The Other 98%" claimed their widely-shared video showed "riot cops [breaking] up peaceful violin vigil for Elijah McClain," and similar articles were posted by Mic and The Daily Dot.

"Police dressed in riot gear used pepper spray to disperse a largely peaceful gathering of thousands of protestors in Aurora, Colorado, who had come together over the weekend to demand justice for Elijah McClain, a 23-year-old who went into a coma and died after being placed in a chokehold by officers last year."

In particular, one short video clip appeared to cause the most acute concern that Aurora police had descended upon a somber vigil composed of peaceful protesters and families as well as violinists and cellists. It shows riot police arriving at the fringes of a gathering of demonstrators, with several musicians at its center. Some attendees are clearly disturbed by that development, with one repeatedly saying "No" while others advise police "There are children here."

The images of police in riot gear apparently arriving to break up, confront, or intimidate a peaceful protest characterized by beautiful string music and a solemn remembrance of Elijah McClain's life understandably caused widespread concern. A few days later, the Aurora City Council held a special meeting to examine and discuss police actions at the event, and high-ranking Aurora Police Department officials, including Acting Chief Vanessa Wilson, provided their account of what took place.

It's true that, at one point in the evening of June 27, police in riot gear did appear at the site of an entirely peaceful vigil and concert, causing fear, concern and intimidation among protesters who had gathered there, as well as undoubtedly restraining their movements for a period. However, Wilson and other officials have emphasized that the intention behind that action was to keep separate those peaceful demonstrators from what they presented as a distinct cohort that had been much more antagonistic towards police and had initially focused their demonstration at the nearby Aurora police headquarters.

Aurora police provided Snopes video evidence that some of those protesters had broken down temporary barriers erected to protect the police building. However, police have not so far substantiated their claims that an order to disperse given to the "Aurora police" cohort of demonstrators came in response to protesters' distributing rocks and pipes with intent, as well as throwing rocks at police. We found no evidence that police had used pepper spray or baton strikes against attendees of the violin vigil. Police did use pepper spray, smoke canisters, and baton strikes against those subject to the dispersal order at the adjacent Aurora police headquarters.

On June 27, 2020, there were three demonstrations at City Center Park in Aurora, Colorado. At 1 p.m., a "Justice for Elijah McClain" rally and march was hosted by the Party for Socialism and Liberation in Denver, which was centered around Aurora police headquarters. At 4 p.m., a rally began that was led by a local student group calling itself "Students for Elijah McClain." That event was centered around the city's Municipal Center, which is also located at City Center Park. There appears to have been some organizational overlap between the 1 p.m. and 4 p.m. events, which were announced in a press release issued jointly by the Party for Socialism and Liberation and Students for Elijah McClain, and published on the Facebook page of the Party for Socialism and Liberation.

The "violin vigil," scheduled for 8.30 p.m., was promoted on Facebook by the Denver Action Network. Organizers described it as "an improvised harmonization to grieve the loss of Elijah McClain." Based on the extensive video footage we examined, the musicians who took part in the vigil appeared to have primarily been located at the Dawn Fountain, on the eastern end of the Great Lawn at City Center Park, right in front of the Municipal Center.

In addition to these examples of what might be termed philosophical proximity and shared missions between the organizers of all three events on June 27, the following map, published by Aurora police officials during their later presentation to Aurora City Council, shows just how close in proximity the demonstrations — and their participants — were to each other on that day.

The area framed in yellow shows the temporary barricades set up to block entry into the courtyard complex (in purple) which houses Aurora police headquarters. Around 250 feet to the southeast, the Dawn Fountain (where much of the violin concert took place) sits right in front of the Municipal Building to the east of the Great Lawn. According to Aurora police department's June 30 presentation to the city council, tensions at the entrance to the courtyard escalated throughout the course of the afternoon. Wilson and her colleagues told the council that police, police sources, or undercover officers dispersed throughout the crowd had observed several events and phenomena which, taken collectively, led officials to decide that the courtyard demonstration was no longer peaceful.

As a result, Aurora PD decided to issue a dispersal order to the crowd at the courtyard. Video footage shows Commander Stephen Redfearn announcing to the crowd that "The Aurora Police Department has determined that this event threatens the safety of persons and property. Everyone is ordered to leave the area and disperse immediately. This is now an unlawful assembly. Please exit in an orderly and peaceful manner. If you remain, you are subject to arrest and the use of chemical agents..." Redfearn added, "We have seen people in the crowd with rocks, we have seen people with weapons."

So far, Aurora PD has made public evidence that corroborates only some of its claims. A police spokesperson directed Snopes to a YouTube video which, among other incidents, shows protesters in the act of knocking over the courtyard barricades:

Video recorded by a protester also clearly shows that protesters had knocked over those temporary barricades before Redfearn issued the order to disperse: The same video footage also shows two instances where three bottles were thrown from the location of the protesters towards the line of police (both shown here). The video montage shared by Aurora PD also shows what appears to be a white smoke canister, which police used in an effort to disperse the crowd, being thrown back towards police, and a police officer being hit by an unknown projectile. In one instance (shown here), an officer appears to be hit by a projectile, and responds by saying "We're taking rocks." However, the video itself does not clearly show a rock being thrown by a protester, or hitting an officer.

None of the evidence presented by Aurora PD, and none of the civilian video evidence we examined, shows any protester throwing anything at police before the order to disperse was given, and we have so far seen no evidence that supports Aurora PD's claim that protesters near the courtyard "armed themselves" with rocks or pipes, or threw rocks at police, at any time. If such evidence becomes available to us, we will update this fact check accordingly.

In their city council presentation, police officials published a photograph showing a handgun holstered around the midriff of a man. Wilson claimed this man was a protester who later climbed a fence and "got high ground" on several police officers. The photograph does not identify the man as a protester, and does not show him climbing any fence.

'We Weren't Trying to Prevent Them from Playing Violins'

After the enforcement of the dispersal order at the courtyard, some of those who had been focusing their demonstrations at Aurora police headquarters moved into the area closer to the Dawn Fountain on the east side of the Great Lawn. At the same time (shortly before 8.30 p.m.), a crowd was gathering for the violin vigil, and musicians had already begun playing.

It was at this point that police in riot gear moved into the adjacent section of the Great Lawn, as shown in the widely-shared video included above. This gave the impression that they were confronting or descending upon the violin vigil itself. Wilson and other Aurora police officials emphatically stated, during their city council presentation, that this was not the case.

"When the officers are marching out by the peaceful protesters, we made that decision to protect them, because we knew that it was about ready to kick off with the people that had intent and were arming themselves. ... It's crystal clear, days later, that that caused panic. And they [attendees at the violin vigil] were like 'What is going on?' and there is a woman that was yelling 'No, no, no' because she didn't know what was going on. And so I failed to communicate with that group [vigil attendees] on what was going on. ... I should have let them know what the intent was."

She added that the plan was to "put a line around" those who had gathered near the fountain for the violin vigil, and to separate them from those had been forcibly dispersed from the police headquarters barricade. Wilson noted that, although dressed in riot gear, the officers who surrounded the violin vigil had their backs turned to it -- a reflection of the fact that police did not perceive those attending the vigil as a threat, and they were not the targets of that particular enforcement action.

Body camera footage provided by Aurora police corroborates Wilson's characterization. In the video below, officers can clearly be seen forming a rough circle around the vigil, with their backs turned to those attendees and their focus clearly on those emerging from the courtyard barricade. At one point, one of the officers can be heard explaining to a vigil attendee "We don't want the crowd to come back this way."

Operations Division Chief Darin Parker added "We weren't trying to prevent them from playing violins, we were trying to protect them." None of the video evidence we examined shows police using pepper spray, smoke canisters, or baton strikes against musicians or others clearly identifiable as being in attendance at the violin vigil and not in breach of the dispersal order given to the courtyard contingent of protesters.