Did Raleigh Restaurant Employees Sing an Offensive Song at a Group of Police Officers?

Surveillance video disproved the story, but the restaurant's reputation has not yet recovered. 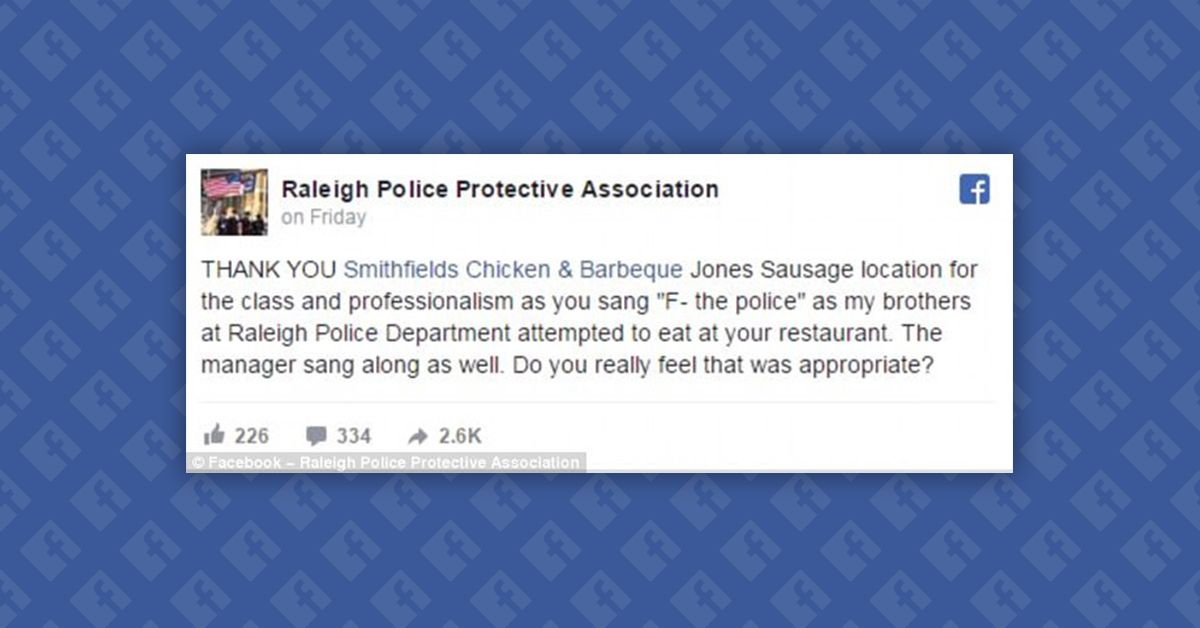 One 30 April 2017 item asserted there was "[o]utrage after restaurant employees 'sang [sic] rap group NWA's anti-cop anthem F*** tha police at officers while they were eating in North Carolina," and a 1 May 2017 New York Post piece reported:

The owner of a barbecue joint in North Carolina has apologized for his employees’ impromptu concert for cops as they ate — a rendition of the N.W.A.’s “F— Tha Police.”

“Thank you Smithfield’s Chicken & Barbeque Jones Sausage location for the class and professionalism as you sang ‘F the Police’ as my brother sat Raleigh Police Department attempted to ate at your restaurant,” a member of the Raleigh Police Protective Association wrote in a now-deleted post on Facebook.

Matthew Cooper, the union’s president, said a couple officers were in the restaurant when employees began to sing the seminal hit from N.W.A.’s 1988 albumn, “Straight Outta Compton.” Cooper declined to give an exact number of employees, but the original Facebook post claimed that the manager was singing as well.

Cooper told The News & Observer on 30 April 2017 that the incident was one of many "officers have to deal with on a regular basis."

But on 3 May 2017, the same outlet published an update to the story. According to both the restaurant's owner and the local police department, the incident never occurred. A single employee (who has since been fired) was said to have "mouthed" the phrase.

Although incidents of the sort are in fact rare, false rumors about refusal of service to policeman are exceptionally common. The stories have roots in the "shunned serviceman" legend, which evolved in 2014 with a "shunned policeman" variation.

David Harris, the restaurant owner, released surveillance footage demonstrating that the incident did not occur:

From the beginning, when I first learned about this situation, I committed that our team would work together fully with the owner of this restaurant, to better understand the matter and to find a way forward. I'm happy to report that we have collaborated in a very positive way, and together we have established that there has been a lot of misinformation spread about this incident. And, today, I'm glad to have the opportunity to update the public on what we've learned.

Despite media reports, two officers witnessed one employee make eye contact with them and mouth the words "F---- the police." There was no singing. There were no other employees involved. Because of the subtle nature of this act, it was not witnessed by anyone else in the store.

Ultimately, the Raleigh Police Department, Smithfield's Chicken 'N Bar-B-Q and our whole community were victims of misinformation and misunderstanding causing the original reporting of the story to be wrong.

The Raleigh Police Department seeks to serve all members and all elements of the community in fairness and without bias. We expect the same in return and are confident that Smithfield's Chicken 'N Bar-B-Q shares those same values. The first step in creating understanding between two parties is to come together to communicate. I'm proud to say, we've done exactly that.

"We need to grow collectively in both organizations beyond this and the Raleigh Police Department remains committed to doing just that.

Harris said he was "very frustrated with the way [the business was] cast" in the viral rumor, and that "400,000 hits later, we are the company that doesn’t like cops."

The Facebook page responsible for the inaccurate viral firestorm published an update on 3 May 2017:

[On 28 April 2017], we shared a post on our Facebook page about Smithfields Chicken and BBQ. There was an investigation conducted and while there were inappropriate comments made by an employee of the restaurant, not all the information in the post was accurate. Smithfields has taken all the appropriate steps to deal with the manager involved and our organization appreciates Smithfields proper investigation and swift action on dealing with the employee.

We have spoken with the owner personally and know he is a strong supporter of our police officers. We believe the issue is resolved and encourage our police officers and members to continue to dine at Smithfields Chicken and BBQ.

Although both police in Raleigh and the business found the claim to be without merit, Harris said Smithfield's has struggled to weather the damage, adding that a "couple of minutes of a post on Facebook destroyed 20 years of work."

As of 4 May 2017, corrections had not been appended to several of the articles responsible for spreading the story nationally and internationally.