Did 'Not a Single Republican' Clap When Biden Mentioned Cutting Child Poverty? 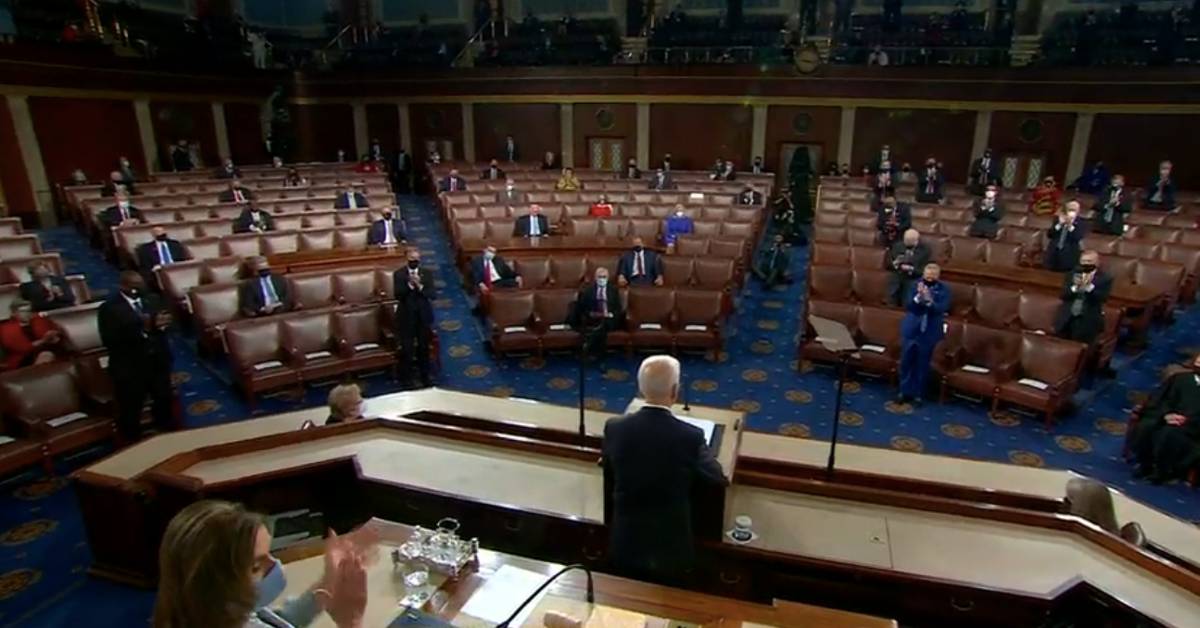 In April 2021, after U.S. President Joe Biden's first address to a joint session of Congress, the left-leaning Facebook page Occupy Democrats posted a meme that claimed Republican Congress members had abjectly failed to applaud Biden's stated goal of drastically reducing the rate of child poverty in the United States.

The meme, posted on April 28, the evening of the speech, contained what appeared to be a screenshot from a video stream, showing the Democratic side of the House of Representatives chamber standing and applauding, while members on the Republican side (circled in red) largely sat and did not appear to applaud. The meme contained the following text:

Everything you need to know about today's Republican party is that Biden just said that because of his stimulus bill, America is cutting child poverty in half... And not a single Republican clapped. As events with a significant element of ritual and political theater, the newly elected president's first Congressional address and subsequent State of the Union addresses are the frequent subjects of political points-scoring and at times divisive analysis. Partisans on both sides habitually scrutinize the actions and body language of politicians from the opposite side, and Snopes has examined such claims several times in the past.

It's also worth noting that representatives and senators, in the context of an address by a president from the other party, might choose to applaud or stand, or not, for various reasons, even when the president has made a statement that some might interpret as worthy of universal support or celebration.

For example, during then-President Donald Trump's equivalent address to a joint session of Congress, in February 2017, he touted the retention of manufacturing and jobs within the United States, saying various major companies "have announced that they will invest billions and billions of dollars in the United States and will create tens of thousands of new American jobs."

A politically motivated interpretation of her body language might be that she failed to applaud because she hates American jobs, or resented economic growth under Trump's tenure. However, a more plausible explanation is that she doubted the underlying sincerity of Trump's commitment to increased employment, that she objected to his presenting those commercial decisions as one of his own accomplishments, and so on.

Similarly, during his 2018 State of the Union address, Trump said "Since the election, we have created 2.4 million new jobs," which was greeted with cheering and applause by Republicans, but almost total silence among Democrats. That could be a sign that those Democrats despise job creation, but it's much more likely to mean that they objected to Trump's touting employment figures as one of his own accomplishments, for example.

Those important disclaimers should be borne in mind when considering the actions and body language of Republicans during Biden's April 2021 address.

What Biden Said and How Republicans Responded

As is customary, Biden listed what he presented as the achievements of his first 100 days in office: expanded access to health care; the provision of stimulus checks; added investment in veterans' health care; and H.R. 1319, the "American Rescue Plan" — a major stimulus and relief package to aid in the federal government's response to the public health and economic crises engendered by the COVID-19 pandemic.

Biden went on to say:

We’re making one of the largest one-time ever investments — ever — in improving healthcare for veterans.  Critical investments to address the opioid crisis.  And, maybe most importantly, thanks to the American Rescue Plan, we’re on track to cut child poverty in America in half this year.

That declaration was met with a standing ovation and universal applause among Democrats in the chamber:

The screenshot included in the Occupy Democrats meme was authentic and showed a snapshot of the reaction to Biden's child poverty remarks on both sides of the chamber. Here's roughly the same view, taken from the CBS News live stream of the speech. Democrats can be seen on the right-hand side, while the Republican side is on the left: However, Occupy Democrats' claim that "not a single Republican" applauded Biden's remarks seriously misrepresented what actually happened. As a result, we are issuing a rating of "False."

In reality, our analysis of video footage from the address shows that at least 11 individuals seated in the Republican half of the chamber applauded in response to Biden's remarks on child poverty.

We have positively identified two of those as cabinet secretaries Lloyd Austin and Anthony Blinken, who are not Congressional Republicans and therefore don't factor into our debunking of the Occupy Democrats meme, but for the record, can be seen below, with Austin standing on the left and Blinken standing on the right: To view a larger, more detailed version of this annotated screenshot, click here. Although clearly not as enthusiastic as their Democratic counterparts, the extent of Republican applause for Biden's remarks is fully revealed by carefully viewing the following footage:

The claim that "not a single Republican clapped" when Biden mentioned halving child poverty was manifestly false. In fact, several of them clearly did, three of whom we have so far been able to positively identify. If and when we confirm the identity of additional Congressional Republicans, we will update this fact check accordingly.