Did Trump Build a Replica Oval Office at Mar-A-Lago?

As far as we can tell, Trump's office at Mar-A-Lago is made up of right angles. 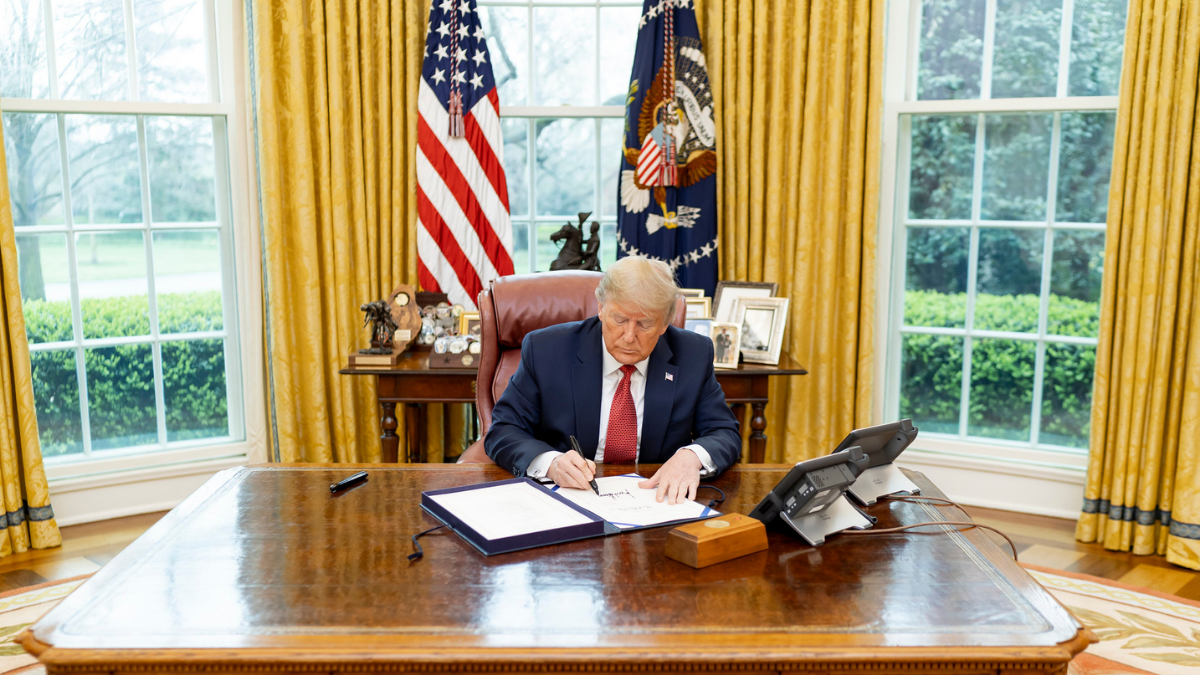 The desk and chair in Trump's Mar-A-Lago office are similar to the ones he used in the White House, but Trump did not build an exact replica of the Oval Office at his Florida club.

In May 2021, a rumor started circulating on social media that former U.S. President Donald Trump had built an exact replica of his White House Oval Office at his Florida club Mar-A-Lago. This rumor was largely based on a meme that also claimed Trump was spending his days watching old videos of his presidential rallies as well as footage from the violent aftermath of the "Stop the Steal" event in Washington, D.C., that led to his second impeachment: The claims made in this meme are fabrications. While we don't know Trump's day-to-day schedule, there have been no credible reports that he has been obsessively watching old campaign rallies or footage of the Capitol riot.

Here's the photograph from Miller (left) and a photograph of Trump in the Oval Office (right):

Trump did bring some personal items from the Oval Office down to Mar-A-Lago. One piece of office décor found in both offices can can be seen on the right of Miller's photograph: A set of family photos. On the left of Miller's image, you can also see Trump's collection of "Challenge Coins," a commemorative coin that is traditionally given to people to prove membership in a certain organization or branch of the military, that were displayed in both offices.

While Trump has displayed various items in both offices, this hardly qualifies as "constructing" a duplicate or replica Oval Office. As you can see in the images above, Trump did not have an oval-shaped room constructed at Mar-A-Lago to replicate the specific dimensions of the Oval Office. He did not decorate the office with the same curtains, flags, carpets, or lights. He simply had some of the items he displayed in the Oval Office transferred to his new office in Mar-A-Lago.

The only items that come close to "duplicating" the Oval Office are Trump's desk and chair. The chair is reportedly the same chair he used in the Oval Office. Trump did not bring the Resolute Desk with him to Oval Office, but he did purchase what appears to be a "Telluride Wood Executive Desk," according to Politico, that somewhat resembles the historic Oval Office desk.

DESK: While Trump couldn’t take the 141-year old Resolute Desk from the Oval Office, he now has a similar-looking desk that appears to be the Telluride Wood Executive Desk from “Hooker Furniture.” The desk currently retails for $3,600 but is currently out of stock until late next month.

CHAIR: Trump used the same chair in the Oval Office, which he brought down from New York, according to a former White House official.

In sum: Trump's office at Mar-A-Lago is decorated with some of the same items that he displayed in the Oval Office. The former president did not, however, build a replica of the Oval Office in Florida.