A photograph depicting the arrival of 10,000 Syrian refugees in New Orleans was taken in Hungary in September 2015 and was used to leverage fear following the November 2015 ISIS Paris attacks. 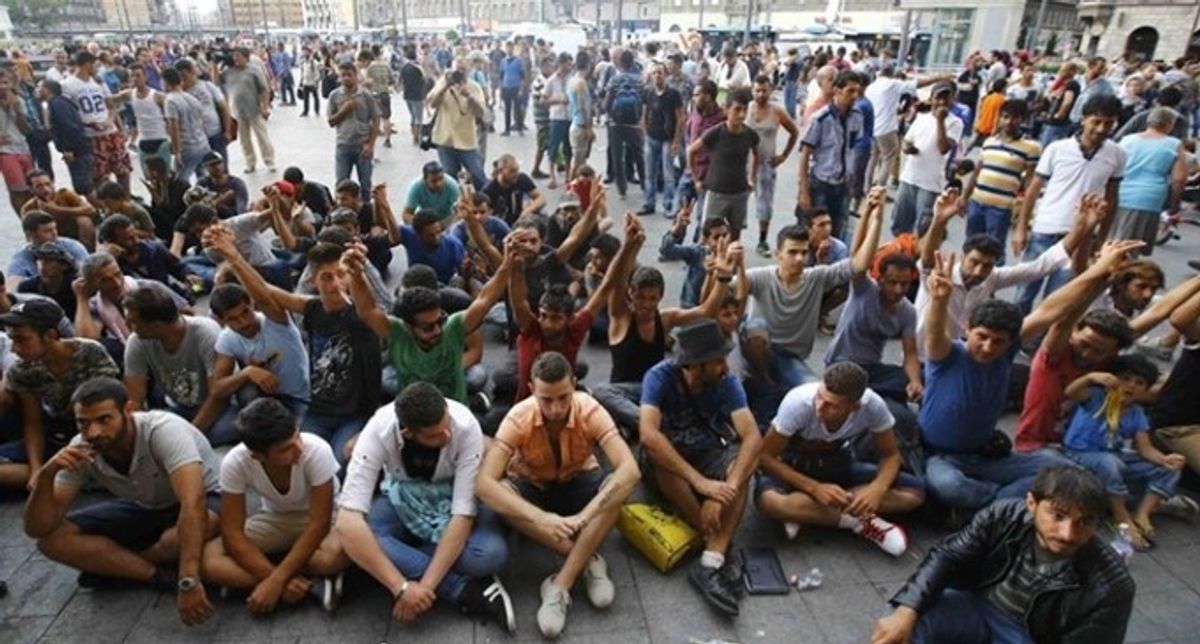 [green-label]Claim:[/green-label]  A photograph depicts the arrival of 10,000 Syrian refugees in New Orleans in November 2015.

Have 10,000 syrian MALE immigrants all flooded into new orleans today?

On 13 November 2015, the web site Powdered Wig Society tapped into those ambient fears with a post titled "Breaking! They’re heeeeeere! First load of 10,000 Syrian refugees has arrived in New Orleans, being resettled into 180 unsuspecting US communities." (A cached version of the intermittently unavailable page was available here.) The attacks then currently underway by ISIS militants in Paris weren't mentioned by name, but the web site claimed:

Photo, above: Muslim refugees arriving in New Orleans. See any women and children in this group? President Barack Hussein promised that he would be sending thousands of Syrian refugees to the US. Well, he is keeping that promise! The first transport of refugees arrived in New Orleans recently and will be resettled in Louisiana and 180 other American communities. See the list below to find a town close to you.

Further down the page, the site claimed a grand total of two Syrian families had possibly been assisted by Catholic Charities in New Orleans (a drastic downward revision from the 10,000-strong male-only refugee contingent):

After the Hayride broke the exclusive story on 10,000 Syrian refugees possibly resettling in Baton Rouge, Lafayette and Metairie, it has now come to light that refugees are already coming into the New Orleans area. Catholic Charities, which receive federal grants from U.S. Department of State/Bureau of Population, Refugees and Migration, have apparently taken in two Syrian refugee families already and are expecting many more. There are approximately 180 cities in the country that are eligible to accept the 10,000 Syrian refugees. Here is the full list of those cities, which includes Baton Rouge, Matairie and Lafayette.

A similar article subsequently published by the Conservative Treehouse on 13 November 2015 was headlined "Ironic Timing — Report: First Load of Anticipated '10,000 Syrian Refugees' Has Arrived in New Orleans ..." with a URL of "today-first-load-of-10000-syrian-refugees-has-arrived-in-new-orleans-all-single-males-18-30-years-old." Again, although the 13 November 2015 Paris attacks weren't mentioned by name in the initial article (an update included a letter from Louisiana Gov. Bobby Jindal referencing Paris), its subtext was clear. "Ironic timing" for the purported 10,000 refugees' arrival was obviously due to its temporal proximity to the Paris attacks, and both posts appeared within hours of the massacres (when general anxiety about terrorism was elevated worldwide). A more credible news  report published two months earlierto which the site linked mentioned Syrian refugees in the United States generally, but didn't even include New Orleans by name among cities in which those seeking asylum might be resettled.

Much like another recent claim about refugees that was misrepresented by the web site Powdered Wig Society, the appended photograph was swiped from another source and used out of context to support a wholly invented assertion that thousands of Syrian men had arrived (or were about to arrive) in New Orleans on 13 November 2015. In actuality the image (slide 11) was published on 3 September 2015, was taken in Hungary, and had nothing to do with Syrians in New Orleans or the November 2015 ISIS attacks in France.

It was clear that rumors were timed to leverage interest in and fears inspired by the attacks in Paris, using a months-old photograph of refugees in Europe to falsely bolster reports of scores of asylum seekers landing in New Orleans. Moreover, President Obama's administration indicated that the whole of the United States would take 10,000 Syrian refugees in the 2014-2015 fiscal year, not that the city of New Orleans would take 10,000 in on a single night in 2015.